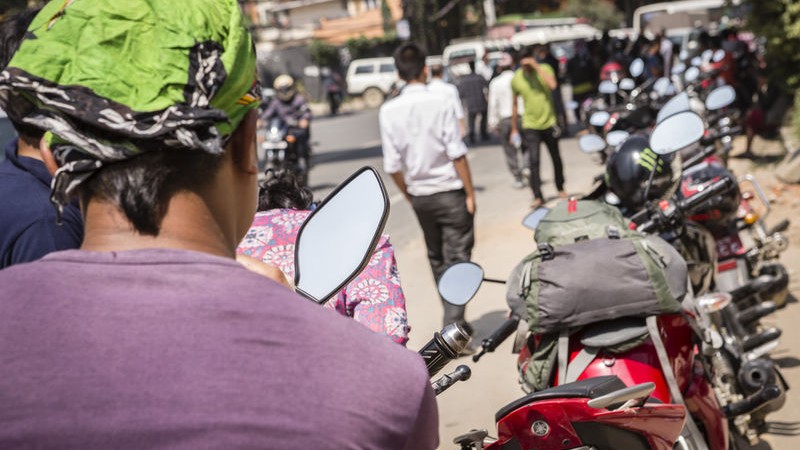 Bikes queue up at the Sajha petrol pump in Pulchowk, Lalitpur, in Nepal. Image by Kristine Lau. Copyright Demotix (September 29, 2015)

Nepal is currently suffering from a major shortage of fuel and supplies, as several thousand trucks with goods from India are stranded at the India-Nepal border. The fuel shortage is so acute that the Nepalese government has introduced fuel rationing nationwide last Friday, September 25. Nepal is a landlocked country that has open borders with India on three sides and relies on supplies, most importantly food and fuel, from India.

Officials in Nepal have accused India of imposing an “unofficial economic blockade,” as it is preventing the trucks carrying supplies from entering Nepal near the Madhes border zone. On the other hand, India has claimed that ethnic Madhesi groups, who have protesting against Nepal's new constitution, are responsible for obstructing the border. Indian officials say they have merely halted traffic into Nepal for safety reasons. 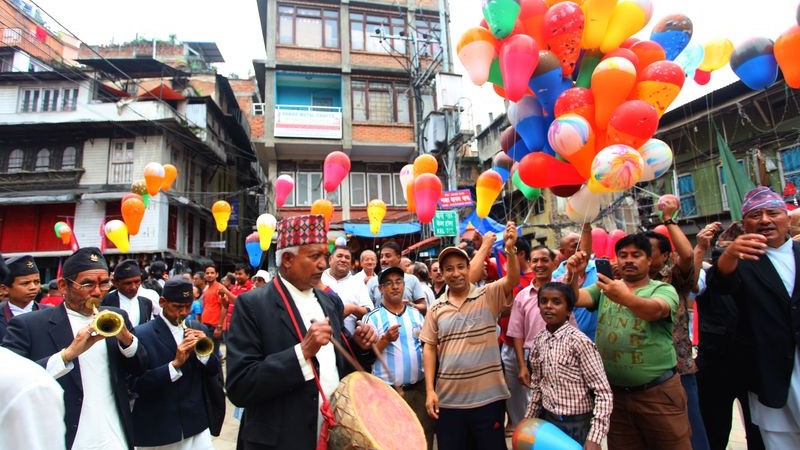 Nepalese people attend a celebration program to mark the beginning of constitution in the country. Image by Sunil Sharma. Copyright Demotix (September 9, 2015)

Many in Nepal have welcomed the new constitution, hoping it will end the tensions between the Maoists and other political groups.

lets join our hands together and make this day successful and memorable. https://t.co/xv3I1jcWyn # #WelcomeConstitution

Several Nepali minorities, however, such as Madhesi, Tharum and Janjatis, have opposed the new constitution, saying it curtails their rights. According to these groups, the constitution fails to honor the Interim Constitution and other past agreements signed with the Madhesi and other forces. Those agreements dealt with the rights of choosing a province's official language, provincial autonomy, and provinces’ right to self-determination.

Amit Ranjan at Madhesi Youth explains why Madhesis are against the new constitution:

Madhesi including Tharus represent about 40-50 % of population of Nepal. With the new constitution Madhesi are looking for the equal representation in the state government and central government. There has been serious allegations made by madhesi leaders of an attempted division of madhesi and Tharu clusters which would limit Madhesi political representation. [..]

This is not a communal protest against any particular ethnicity or particular person. The government and leadership in the status quo has, however, attempted to make the agendas of Madhesi as communal and bring a split between Hill based people and Madhesi which is simply not the case.

In the past month, some protests against the new constitution turned violent and left dozens of people dead in several parts of Nepal. India complicated matters by dispatching Prime Minister Narendra Modi's special envoy, Indian Foreign Secretary Subrahmanyam Jaishankar, who tried to broker a deal between the country's ruling coalition and Madhesi-Tharu leaders, before the new constitution was adopted. India also advocated seven amendments to the new constitution, to ensure its acceptability to the Madhesis and Janjatis.

Many Nepalis have not taken lightly India's intervention. Some have pushed back online with the hashtag #BackOffIndia, which went went viral on Twitter:

The country is still recuperating from the devastating earthquake in April that killed more than 9,000 people and left millions more homeless and displaced. With Indian trucks carrying cooking fuel, gasoline, salt, sugar, and rice stopped at the border, public anger against the Indian government has continued to rise. The landslides caused by the earthquake have destroyed alternate supply routes from China, leaving Nepal dependent on imports from India.

To many Nepalis, India is punishing Nepal for ignoring its concerns about Nepal's new constitution.

To put blockade on a small neighbor country which is recovering from #nepalearthquake is at best, cowardly mentality. #IndiaBlockadesNepal

It is estimated that 3% of #Nepal‘s population has been pushed into poverty as a direct result of the earthquakes. Now #IndiaBlockadesNepal.

Kathmandu Airport has no aviation fuel 'cause supply hit by economic blockade of Nepal by India #IndiaBlockadesNepal https://t.co/FvXYjXSnXi

In the streets of some cities, protesters shout anti-Indian slogans. Nepali cable television operators have blocked 42 Indian channels in protest against the alleged unofficial “blockade of goods” into the country. A Kathmandu movie theatre has also stopped showing Indian movies.

As per section 10, article 125, of the Convention on Transit Trade of Land-Locked Countries, Nepal has the right of access to and from the sea. Nepal and India have also signed the South Asia Free Trade Area Agreement. Some experts say India’s decision to halt supplies into Nepal is a breach of international conventions and multilateral agreements.

Some Nepalis are frustrated that the world is not taking more notice of the problem:

Modi govts blockade in Nepal makes me wonder how India can break international policies and other countries remain silent! #BackOffIndia

Some protests have even occurred overseas:

Whatever becomes of these protests and the new constitution, there still appears to be no end in sight for the miseries visited on the people of Nepal.