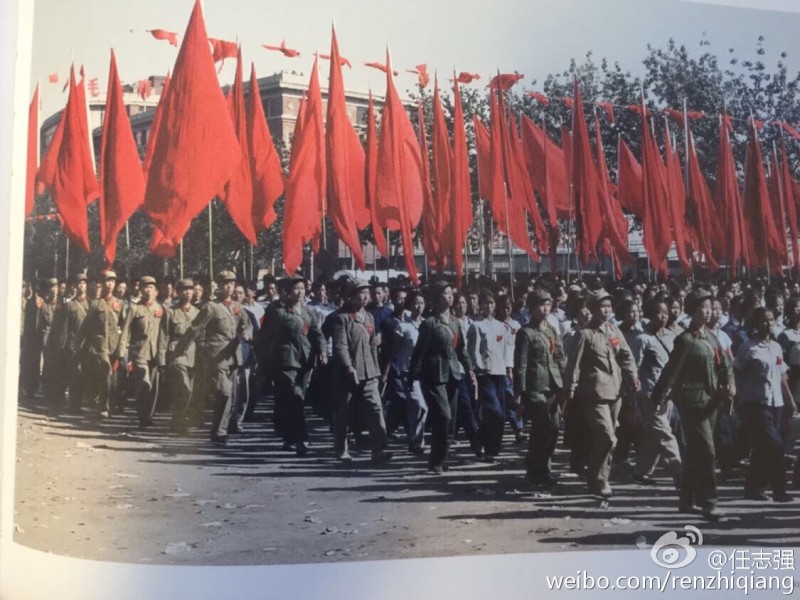 During the Cultural Revolution, the red guards believed that they were the successors of communism and were very active in class struggle. Historical photo from Ren Zhiqiang's blog.

Since China opened its doors to the world's business in the late 1970s, the country's private sector has grown rapidly. Today, China's economy may seem to have more in common with its capitalist Western counterparts than with a truly communist system based on collective ownership of the means of production.

While some might argue that China is no longer communist in a strict sense, it's still very much a feature of the ideological battle being waged under current Chinese President Xi Jinping. Slogans such as “uphold communism” or “communism is the greatest ideal” often pop up on social media, and public figures who don't profess their love for the motherland with enough conviction have become the target of online trolling.

The latest person to catch flak is real estate tycoon Ren Zhiqiang, who spoke out against a communist slogan and triggered a hot debate online.

‘I have been cheated’

Ren Zhiqiang, who has more than 33 million followers on Twitter-like Weibo, is nicknamed “the cannon” for his outspokenness. The phrase he took issue with was “we are successors of communism,” which appeared as a hashtag in a statement from the Central Communist Youth League, a party organization with 75 million members and a coordinating body of the “civilization” campaign to spread online messages that put China in a positive light:

Belief: Indeed, for members of the Youth League, communism is the ideal and a process [toward this ideal]. Our current stage is to fulfill the Chinese national revival and to build a democratic civilization that will bring about a harmonious socialism and a modernized state — all these projects are part of the process [toward communism]. Let us hold up the flag of communism with pride because we are the successors of communism.

“We are the successors of communism” was a theme song featured in the 1961 movie “Little Heroes” meant to spread patriotism among young people in the then newly established China. The lyrics speak of following in the footsteps of the forbearers of the communist revolution by struggling against and destroying the enemy for the cause of communism.

Upon reading the League's message, Ren commented, “I have been cheated by this slogan for over a decade.” In his day, Ren was one of the youth who believed in political struggle, but he has grown disillusioned looking back on the violence of the Cultural Revolution, a movement led by Chinese Communist Party chairman Mao Zedong throughout the 1960s to rid the party and country of people who were deemed not true communists. At the same time, Mao's disastrous economic policies contributed to the Great Chinese famine, during which millions died.

In a response article titled “Are we the successors of communism?”, Ren argued that today's young communists are not in fact the heirs of communism, calling Mao's rule a “dictatorship.” Below are excerpts of his piece via “What's on Weibo“:

When I was in the third grade, wearing a red neckscarf, I also learned this song. Every time we saw the five-starred red flag raised, we saluted it with our right hand, and sang this song. Our hearts were full of confidence and hope! […] We dreamed of being seen by Leader Mao Zedong: a real successor of communism.

I never thought that when the Cultural Revolution began a few months later, my parents would become ‘capitalist-roaders’, and I would be the child of criminals, and get the glorious title of a ‘son of a bitch’. My dream to grow up to be a next generation communist changed to being a child who had to be rehabilitated.

We’ve been deceived for years. The Cultural Revolution only let me know the class struggle under a proletarian dictatorship. And that there is no next generation of communism.

‘Communism is a very far-reaching and hard goal’

Ren wasn't arguing against communism itself, but the way in which the Chinese Communist Party has gone about realizing it in China.

He wrote that China should abandon the empty talk of communism and deal with its immediate problems — establish democracy and freedom to promote equality, stabilize incomes, strengthen the rule of law, and embrace the world's value system — to prosper. With more prosperity, China will inch closer to true communism, he said, but that will take time — communism isn't something that is achieved overnight or even within a few generations.

His comment polarized Chinese social media. Opponents accused him of attacking the party, while supporters applauded him for boldly speaking out.

The League quickly responded in an article written by its Propaganda Minister Jin Lin that insisted that communism is the existing base of the Chinese Communist Party and accused Ren as a party member of betraying his belief:

Now that Ren Zhiqiang has openly opposed the communist ideal held by party members and specifically mentioned that the Youth League as the successor of communism is a big joke, as a member of the Communist Youth League I find it necessary to respond to Mr. Ren’s comment seriously and peacefully. […] As a public figure, he has the freedom to hold his beliefs. But as a party member, we have the freedom to believe in communism and no one can point fingers at us. Ordinary people can't do such things, celebrity can't, non-party member can't and party members shouldn't.

Jin Lin's claim that Ren, as a party member, opposes the communist party's beliefs was used as excuse for political persecution during the anti-rightist movement in 1950s and the Cultural Revolution.

‘Don't confuse criticism of the party's history…as opposing the party’

Ren defended himself, penning another article refuting the League’s accusation and clarifying his view. He pinned the post at the top of his Weibo page with the following remark:

The Central Communist Youth League posted an article discussing me, labeling me as anti-party and anti-communism. I have to write something warning against allowing the League to use ignorance to cheat the younger generation, against allowing China's reforms and opening up to be scaled back. I don’t care about being abused, but the League can’t use ignorance to cheat society!

Don't confuse criticism of the party's history and current status as opposing the party. In the history of the Chinese Communist Party, the leadership and party lines have changed many times. In fact, Mao Zedong criticized the party the most and the struggles over party lines were mainly the result of the status of Mao's leadership. So how should you describe the internal party struggle? As opposition to the party or love for the party?

What I oppose is sloganeering “successors of communism” for quick success and instant benefit today! It would mislead the public, especially the younger generations.

Communism since the establishment of the Chinese Communist Party does not belong to any nationality and state. Communism is internationalism, a project which cannot be fulfilled by any single party, nationality or state. […] What China can do is to combine Marxism with the country’s specific situation to build “socialism with Chinese characteristics.” But it is merely at most a “Chinese Dream” rather than communism!

Ren said he was forced to delete his introductory remark to the post on Weibo to settle the dispute, but you can still read the article on his blog.

Even though the League isn't an official department of the government or the party, it has been able to influence millions of youth through its enormous affiliates across the country. It’s also the power base of former President Hu Jintao, who was its previous general secretary, and has produced such luminaries as current Premier Li Keqiang and Guangdong party chief Hu Chunhua.

However, at a July central leadership meeting, Xi Jinping sent a warning signal to the powerful League to be less “aristocratic” and more in touch at a time of slowing economic growth within China.

As of the end of 2014, the League had recruited nearly 90 million members, who pay an annual fee and must be less than 28 years old, according to figures from its personnel department.