The Enormous Mural That Made a Mexican Neighborhood ‘Magical’ 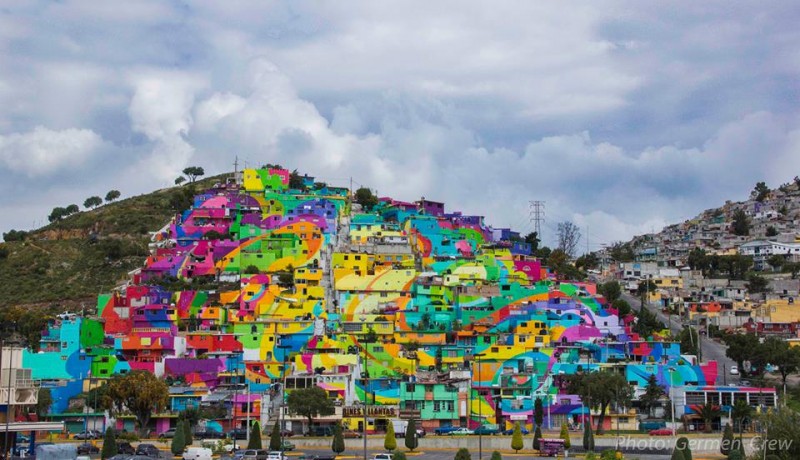 In the center of a small neighborhood located in the city of Pachuca, Hidalgo, the largest graffiti mural in all of Mexico, painted onto a canvas of 200 homes, was inaugurated this July. But the “macro mural” has done much more than simply give some color to the hillside district of Las Palmitas, a predominantly rural neighborhood with a certain degree of poverty and crime.

The collective effort has created jobs, reduced youth violence and instilled a sense of community spirit, turning Las Palmitas into what the project leaders have dubbed the “first magical neighborhood” — a play on the Mexican government’s separate initiative to promote “magical towns” (Pueblos Mágicos) as tourism destinations.

Leading the project was the independent Mexican collective the Germen Crew (Seed Crew), composed of urban artists specializing in graffiti art, mural painting and audiovisual documentary. A group which, through public and street art, aims to give new meaning to public spaces and restore social fabric for the benefit of communities. Their Facebook page reads as follows:

Our work is an artistic offering for our cities. It is through colors, forms, textures, and mixed media that we share our way of making and understanding art. We seek to detonate the seed of possibility by strengthening the hearts and enthusiasm of those who live in the places we step into. We want to give new purpose to public spaces, making them more useful for their inhabitants, places that educate, motivate, and help to support and sprout new relationships with the surrounding citizens and the expressions that converge there.

Beyond the collaboration of the local and federal government, which facilitated the materials needed, the project was fueled in large part by the active participation of the 452 families that live in Las Palmitas (about 1,808 people). The residents were consulted throughout the three months that the project lasted, and they also took part in various cultural activities that were held at the same time: workshops, lectures, and tours, all with the objective of reducing juvenile delinquency.

‘So much harmony and coexistence’

In the above video documenting a workshop on lantern balloons, Las Palmitas residents remarked that the artistic activities were having a positive impact on the neighborhood:

For us it is a festive day in our district, because we are experiencing things we had never experienced before.

I see so much harmony and coexistence, above all in our families. I believe that with these events my neighborhood will improve greatly and I don't think there will be so much delinquency.

In an interview with ideas magazine Planisferio, the Seed Crew explained that what makes their approach innovative is their focus on painting not institutional spaces, but rather public plazas, markets, and even marginalized areas with significant crime rates. At the same time, they said, their success is the fruit of their collective efforts and group dynamics.

‘The first magical neighborhood of Mexico’

The statement “Color is magic” opens a brief video that documents the transformation of Las Palmitas to a vibrant, colorful community.

With more than 13 years in existence, the Crew has undertaken projects in the Jamaican Market of Mexico City; in the esplanade of the new towns in Ecatepec in Mexico; and in Miravalle, Guadalajara, among many others. Now, they have achieved their aim of transforming Las Palmitas into what they call the “first magical neighborhood of Mexico,” and everything seems to indicate that there is still more to come.