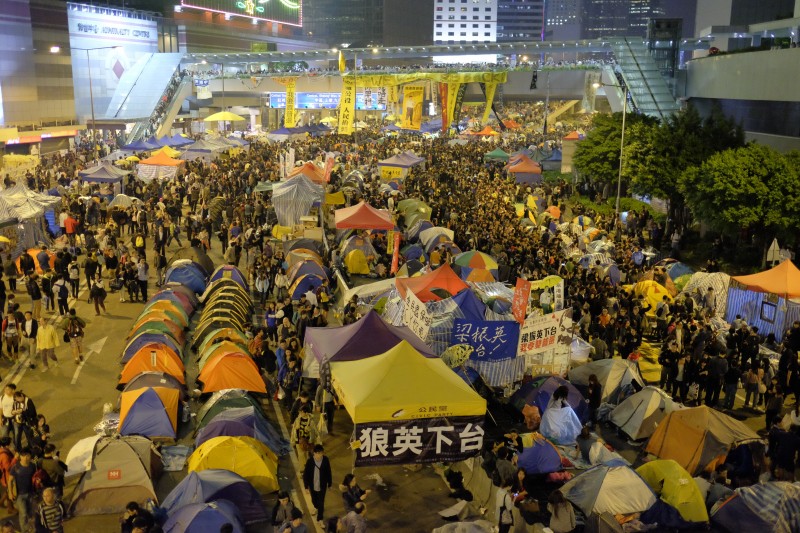 Occupy protestors prepare for a final sit-in at the protest area in Admiralty, Hong Kong, on December 11, 2014, after a judge issued an injunction allowing police to clear the last remaining camps. Photo by Jason Langley. Copyright Demotix

A recent paper by Lokman Tsui, a professor at the School of Journalism and Communication of the Chinese University of Hong Kong and longtime member of Global Voices, offers a chilling look at how authorities in Hong Kong outdid their rivals during the 79-day Occupy Central movement that hit the city in late 2014.

Thousands of protesters set up camp in downtown Hong Kong in September of last year to demand the freedom to choose candidates in the city's first direct vote of its chief executive in 2017. China has held that anyone vying for the top position in Hong Kong, a special administrative region with a certain degree of autonomy from the mainland, must get majority support from a nominating committee stacked with pro-Beijing members.

The Occupy movement braved police violence as well as political pressure and intimidation on and offline from Hong Kong and mainland Chinese authorities before being driven out by authorities. Technology played an important role in the movement's organization and coordination, becoming “a critical channel for communication with the public,” according to Tsui. He described this as “a fairly typical script” for how technology aids social movements.

In response, the government not only defended itself but, as Tsui states, went on the offensive. His paper describes the various tactics deployed by the government and its allies to dissuade and diminish the Occupy movement.

The current surveillance regulation ordinance only refers to telephone, fax and postal mail, and makes no mention of Internet communications. By repeatedly refusing to confirm whether its protections extend online, the government is implying that there are none.

“One of the more problematic arrests made under [Crimes Ordinance] Section 161 includes charging a 23-year-old from Mongkok with ‘access to computer with criminal or dishonest intent’ and ‘unlawful assembly’ for allegedly messaging folks on an online discussion forum to join him in a protest in Mongkok.”

DDoS attacks on an unprecedented scale

“The pro-government side was able to hit a series of critical websites with an unprecedented amount of junk traffic (500 Gigabytes per second), including the website of the Apple Daily, a pro-democracy newspaper in Hong Kong, and PopVote, Hong Kong University’s online voting platform, leading Matthew Prince, the CEO of a hosting company that specializes in DDoS protection, to call it the ‘largest cyber attack in history.’”

Painting technology-related activities as a US conspiracy

In the case of Hong Kong, the government was “pushing a narrative of ‘foreign interference’, a xenophobic narrative that accuses civil society organizations of being inauthentic, that they are being used and funded by foreign governments, especially the United States government, who seek to undermine and weaken China by fomenting revolution in the name of ‘democracy.’”

Tsui ends the paper on a sobering note:

The Internet still has the potential to empower social movements; they might even allow temporary gaps of freedom. But the [Occupy Hong Kong] movement suggests that both the Internet and Hong Kong are at a crossroads, that both cannot take its freedoms for granted. This is not to say that spaces of autonomy and freedom no longer exist online or in Hong Kong; however, they are increasingly being marginalized and, at this point in time, are best understood as the exceptions rather than the norm.

Tsui's paper, titled “The coming colonization of Hong Kong cyberspace: government responses to the use of new technologies by the umbrella movement,” was published in the Chinese Journal of Communication in July 2015. Read the full paper on Tsui’s blog.