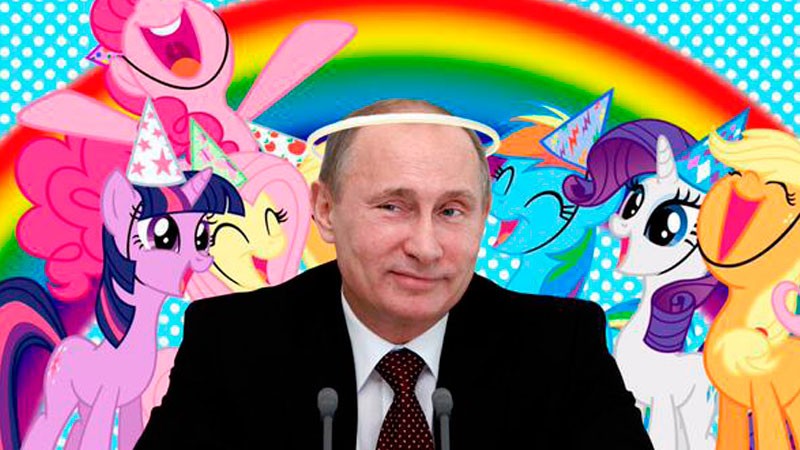 Three dozen world leaders read speeches to each other in New York this Monday, September 28, at the 70th session of the United Nations General Assembly. In Russia, President Vladimir Putin's address to the UN was a national media event. TV networks broadcast marathon coverage, and Putin's remarks were carried live on primetime. After he was done speaking, talk shows assembled roundtables to discuss the speech. On the state-owned channel Pervyi Kanal, panelists debated whether Putin had more effectively sparred with Barack Obama or connected with the world community.

On the Internet, journalists drew attention to a handful of hashtags that appeared to be the promotional work of several bot networks. The most common among them, “PutinPeacemaker,” was an alliterative attempt to celebrate the Russian President's efforts to resolve the Syrian Civil War by backing President Bashar al-Assad. Using this hashtag and others like it, there were more than a few efforts to make it seem like ordinary folks really believe in Vladimir Putin's ability to solve this conflict and others.

While any kind of electronic popularity is easily inflated with bots, hashtags are particularly fraught with problems and vulnerabilities to manipulation.

The application TweetDeck offers a somewhat different way to isolate “popular” tweets, and that's how the following tweets about Putin were collected. Below you'll find an assemblage of tweets mentioning Putin's name (spelled in Russian) with more than 25 retweets. With one exception, tweets by news agencies have been excluded, as have tweets that simply quoted something Putin said during his speech or at one of his meetings afterwards. The idea of this list is to showcase what comments about Putin seemed to resonate best with Russian-speaking Twitter users today.

First on the list is a tweet by the Russian state-owned media outlet RIA Novosti, which hints that Putin managed to reach some kind of important deal with the United States today in New York. Notably, RIA Novosti also uses the hashtag #PutinPeacemaker, which didn't appear much in the “top tweets” recorded by TweetDeck, despite the efforts of an apparent bot network.

Putin recommends against looking for secret meanings in photographs of his lunch at the UN. #PutinPeacemaker

One common interpretation of Putin's visit to New York was that his reception in the United States signals the West's failure to isolate Russia. Photographs of Obama and Putin dining and shaking hands are said to prove that Russia is, in fact, a vital member of the world community—even in a place like the United States, which has helped lead the campaign to punish Moscow for its policies in Ukraine.

The very essence of isolation.

The #PutinPeacemaker hashtag managed to attract a significant number of retweets only one other time on this list. That tweet, found below, is typical of many of the posts featuring this hashtag (except for the fact that other Twitter users actually shared it). Like RIA Novosti's tweet, we find Vladimir Putin smiling and holding aloft a glass of wine, apparently in celebration.

The photo of the day.

It wouldn't be a Putin celebration without mockery of Russia's anti-Kremlin political opposition. Many observers have noted that Putin has never spoken in public the name of anti-corruption activist Alexey Navalny, considered by some to be the leader of the opposition. While Navalny's supporters and others say this is due to Putin's fear that naming Navalny would empower him as an adversary, Russians who don't think much of the anti-Kremlin muckraker seem more inclined to believe that Navalny-supporters’ gripes about Putin's rhetorical reticence are simple arrogance.

Among the highly-retweeted posts were several texts by prominent Putin supporters. Moscow city councilman Alexey Lisovenko was ready to speak for the whole world:

I listened very carefully to the speeches by Obama and Putin today at the UN. I can say with certainty: the world should be grateful that it has Putin.

An account that regurgitates and mimics statements by Dmitry Kiselyov, a prominent television host and head of the Kremlin-controlled Rossiya Segodnya media conglomerate, shared more advice for the entire world:

Putin made it very clear that only one force in the world should override all others: the United Nations. And this message was clear to all countries, except the US and its satellites.

Other Twitter users found Putin's speech to be simply a good opportunity to make fun of the Americans:

Putin didn't once say the word “faggots,” but everyone knew he was talking about the United States.

Putin's supposed influence over the market was a theme exploited by both his fans and his critics. In this example, a Twitter user implies that Putin's tough talk in New York succeeded in driving down the US stock market.

Putin speaks and the money-changers tremble.

Ukrainian President Petro Poroshenko didn't get off the hook, either. Putin's star-studded schedule, when compared to Poroshenko's relatively less impressive meetings, was fodder for jokes about Kyiv's growing isolation, as the honeymoon phase of Ukraine's post-Maidan relationship with the West comes to a close.

Putin met with the Secretary General of the UN, the President of Iran, the Prime Ministers of Iraq and Japan, and President Obama. Poroshenko had a meeting with an open bottle.

In the spirit of speculating wildly about what photographs signify, an image of Obama extending his hand to Putin seemed to many Russian Twitter users to be proof that the White House was probably lying when it claimed the Kremlin “begged” to arrange the meeting between Obama and Putin.

Remember the Ukrainian and American news headlines about “Putin begging Obama to meet”? Now it's obvious who begged whom. :)

Today's most resonate tweets about Putin's UN trip weren't all doting hashtags and photos of him consuming alcohol; the anti-Putin crowd was out in force, as well, flooding the Web with its own special brand of snark and angry mockery.

While the Russian President's fans celebrated his apparent ability to influence trading on Wall Street, his critics tied Putin's remarks to the slight depreciation of the ruble against the dollar during his UN address.

After the US news network CNN mistakenly identified Putin as the late Boris Yeltsin (Russia's first post-Soviet president), some saw it as an opportunity to joke about Putin's advancing age:

CNN mistook Putin for Yeltsin. This shows that Putin is already dead to the whole civilized world.

As Putin's tenure as head of state approaches more than 15 years (including his time as prime minister under Dmitry Medvedev), obsession with Putin's death is palpable. For many both inside Russia and beyond its borders, imagining a new Russia is impossible without first removing Putin, who isn't expected to go quietly.

It doesn't matter when Putin will meet with Obama. What matters is when he meets with Muammar Gaddafi…

Putin's warning to the West that it risks repeating its Libya mistakes in Syria didn't impress anti-Kremlin blogger Kirill Mikhailov, who argued that Syria is already far bloodier and more chaotic than Libya.

Putin really doesn't want Syria to turn into Libya. [Here are] the statistics for casualties and refugees in these countries since 2011.

Those who don't fantasize about a dead Putin content themselves with visions of the Russian President on trial, presumably for war crimes in Ukraine, or perhaps for repressive policies at home. Photographs of Putin sitting in a chair ahead of his speech at the UN unflatteringly made him seem quite miniature. The image proved to be handy material for jokes about “Putin on trial.”

When he's on trial at The Hague, Putin will also be facing the world community with a police officer at his back.

Not all the anti-Putin tweets were fanciful speculations about Putin's ultimate demise. Political commentator Andrei Piontkovsky said nothing of Putin's mortal coil, warning instead that Putin is dragging Russia into a Middle Eastern holy war.

Saving Assad's butt, Putin throws Russia into the sizzler of a medieval religious war between Shiites and Sunnis.

Finally, some Russian Twitter users managed to gain an audience by flipping the pro-Putin crowd's rhetoric on its head.

A question to all the Putinists out there: if Obama is a dick, but Putin shook his hand, what does that make Putin?