When Online Kremlin Propaganda Leaves the Web, It Looks Like This 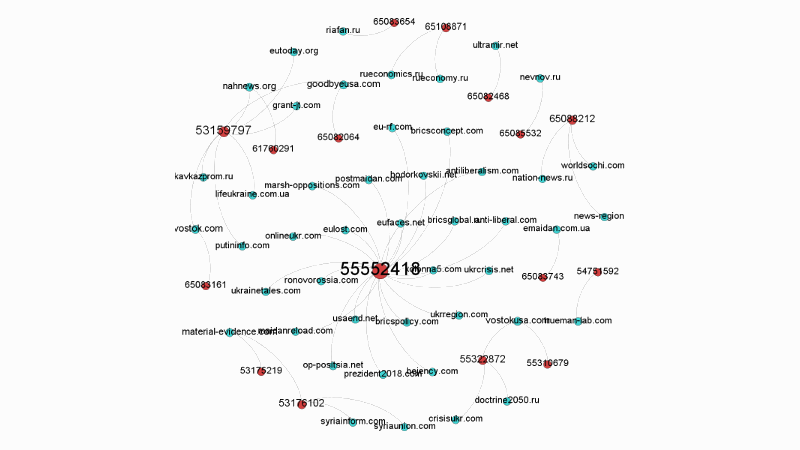 The Material Evidence exhibition website was just one of dozens in the pro-Kremlin network discovered by Alexander.

In previous investigative pieces for RuNet Echo, Lawrence Alexander has exposed a large network of pro-Kremlin websites, and (together with Aric Toler) provided an in-depth look at some of these resources. In this installment of his network saga, Alexander follows an offline lead from the tangled online web of sites rooting for the Kremlin agenda.

“Material Evidence” is one of few pro-Putin Internet projects connected to Russia's “troll factories” with a significant offline trail. Because of this, we can trace its operations better than we can with other similar schemes. Pulling the threads of Material Evidence reveals that it has exploited and fooled several individuals in its efforts to promote itself.

A touring exhibition of photographs and artifacts focusing on recent events in Ukraine and Syria, Material Evidence's imagery placed heavy emphasis on violent clashes during the Euromaidan protests, particularly on the supposed extreme-right elements in the movement. The show debuted in Moscow as “ВеЩдоки” [1 2, an abbreviated Russian portmanteau for Material Evidence], where it claimed to have the support of the Moscow Department of Culture and Russia's Syrian Embassy. The exhibit then moved on to Europe and the US, where it drew allegations of pro-Kremlin propaganda and “astroturfing,” both from journalists and from some skeptical visitors. At least one observer questioned the statistical validity of the infographics on display.

The appointed curator for the Material Evidence tour in the West was a man named Benjamin Hiller—a German-American photojournalist with over seven years of experience, particularly related to the MENA countries. RuNet Echo got in touch with Hiller to find out how he came to front the exhibition.

It was in May 2014, Hiller told RuNet Echo, that he was first contacted by Alexander Zhitenev, who was then acting as “manager” of the Material Evidence project in Moscow. Zhitenev was looking for “a proper curator to enhance the exhibition”—someone with a recognized journalistic background. A month later, in June (and despite some early reservations about the show's stance toward Syria and Ukraine), Hiller took on the job. WHOIS records show the English-language Material Evidence website was registered at exactly this time.

In a previous interview with Adrian Chen for the New York Times Magazine, Hiller claimed that the touring art show's costs were covered by crowdfunding. Having found no trace of Material Evidence on any of the leading crowdfunding sites, RuNet Echo asked him to elaborate.

“When I was brought into the project, I asked how they are financed. They told me via crowdfunding, and some single-donations from ‘middle class businessmen.’ I took it in the beginning (a bit naive, I know) as granted,” Hiller said. “After the New York Exhibition I got doubts—and as far as I know, there was never any crowdfunding involved. I was lied to in that regard by Material Evidence (as they did in so many other instances).”

It was Zhitenev, Hiller said, who acted as intermediary between him and the “businessmen”; it was also his job to handle the administration and pay the gallery staff. It remains unclear, however, how exactly Zhitenev got involved with the project. According to Hiller, he had no journalistic or creative background, deriving his main income from a cleaning business in Moscow. (Russian state records appear to confirm this, showing such a company, А-Сервис (A-Service), registered under the name of Alexander Zhitenev.) So how did he come to run a photographic exhibition?

Zhitenev claimed to Hiller that it was his wife who brought him into the role, which her work colleagues at an “advertising agency” were seeking to fill. RuNet Echo wasn't able to find information to confirm this, and Zhitenev did not respond to our request for comment.

As Material Evidence began to promote itself around New York in the autumn of 2014—employing an extensive ad campaign—allegations of political bias began to emerge. One article by Ukrainian singer and activist Ruslana pointed to the strange use of the name Svetlana Zakharova, a patriotic Russian ballerina, as the registered administrator of Material Evidence's website. Spotted along with it was the e-mail address of one Nikita Podgorny—the crucial detail that provided a link between St. Petersburg's Internet Research Agency and the pro-Kremlin web network in an earlier RuNet Echo investigation.

In a BuzzFeed article dated October 12, 2014, Hiller issued a strong rebuttal, calling the allegations “a lie.” When asked about funding, he stood by his previous claims about crowdfunding. Material Evidence, he said, had no connection to Zakharova: their Web designer had used the name without their knowledge and for reasons unknown. Hiller went so far as to suggest that Material Evidence might resort to legal action against the designer.

Was that designer Nikita Podgorny? Hiller maintains he never had any contact with Podgorny. Furthermore, he claims he had “no contact with the wider [Material Evidence] project”. Instead, all of this went through Zhitenev, who pledged to resolve the issue over the website. But Hiller says he heard nothing more on the matter.

This odd episode made Hiller further question the legitimacy of Material Evidence. In November 2014, he requested a face-to-face meeting with its elusive “businessmen” funders. But after initially agreeing, the backers never appeared. “I was sitting frustrated in Moscow (the first time in Russia for me), feeling more and more that I was being used as a pawn for a pro-Russian agenda,” Hiller said.

Hiller said he finally quit the project in February 2015.

The timeline of Material Evidence's appearance in Europe and the US matches periods of peak activity in the wider pro-Kremlin website network. Domain registration dates show that just over half of the 84 sites identified to date were created between May and August 2014 (as seen in the interactive graphic of the registration date distribution below).

The geopolitical focus of Material Evidence—on rebellion and protest in Ukraine and Syria—is also strongly reflected in many of the websites in the network, notably Syria Inform, Syria Union, and Emaidan.

In its early days, ВеЩдоки (the Russian Material Evidence exhibit) appears to have made significant use of online spam to promote itself. In the winter of 2013, as the show opened in Moscow, identical messages were posted across dozens of Russian forums (see examples 1, 2, 3, 4, and 5) in an attempt to draw in visitors. The profiles involved were mostly fakes specifically created for the purpose, with some also spreading pro-Kremlin political sentiment on other topics. Similarly, the ВеЩдоки VK community was administered by an account otherwise dedicated to business promotion and marketing.

The now-defunct ВеЩдоки website credited the Syrian Embassy in Russia and the Syrian Information Ministry for assisting their venture. The site stated ВеЩдоки's rationale as:

All Russians should understand what is happening in Syria and what makes the Russian MFA [Ministry of Foreign Affairs] and the Russian President personally engage in tremendous efforts in the international political arena.

The newspaper ЖУРНАЛИСТСКАЯ ПРАВДА (Journalistic Truth) was originally presented as the organizer behind Material Evidence, and some sources claim it is ultimately funded by the Internet Research Agency “troll farms” previously reported on by RuNet Echo. Its website, http://jpgazeta.ru/, was part of the same network that led to our original investigation, but its Google Analytics tracking code has since been changed. Both its VK profile and its Twitter account were apparently suspended for using spam techniques.

The now inactive Russian exhibit website вещдоки.рф (veschdoki.rf) was created in December 2013, presumably to further promote the project, but it seems no content was ever added to it. Records show that four other sites had been hosted on its server (1 2 3). One of them, nation-news.ru, features in the wider pro-Kremlin network. Another is Material Auction, an incomplete skeleton site bearing the Material Evidence logo. It was registered under Hiller's name shortly before he left the project in February 2015. An e-mail address, benjhil@yandex.com, also appears in its domain records. But Hiller denied any knowledge of the site or the Russian Yandex address, citing it as another example of how the project had acted dishonestly towards him.

“I regret to have been part of a pro-Putin propaganda show,” Hiller told RuNet Echo. “[Material Evidence] tried to use me and the photographers I organized as pawns for their propaganda war, and succeeded with that to a degree.”