Kazakhstani Textbooks Send Local Patriots and Ukraine into a Tantrum (Clue: It's About Crimea) 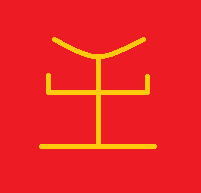 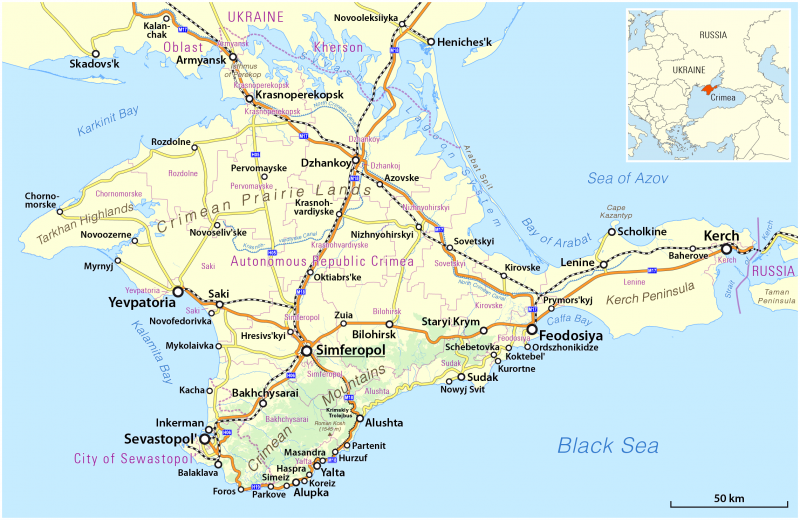 Whose bit of land is this anyway? Map of Crimea. Wikipedia image.

Kazakhstan is in a spot of hot water over its approval of geography textbooks slated for secondary schools in the Central Asian country that show Crimea as part of Russia rather than Ukraine.

Not surprisingly, the textbooks, which were printed by the local publishing house Mektep, quickly caught the attention of both the Kazakh public and Ukraine, neither of whom were impressed.

While the Ukrainian embassy in Kazakhstan duly bashed out a note of protest on September 25, patriotic Kazakhs have pointed out the parallels between Crimea — populated mostly by ethnic Russians — and northern Kazakhstan, where much of the vast, steppe-dominated country's own Russian population lives.

On top of effectively acknowledging Russia's annexation of the peninsula in 2014, the textbook series provides a controversial explanation regarding Crimea's accession to Russia, which does not mention the fact that most countries in the world — including Kazakhstan — have not formally recognized the move.

In its defense of the series, Mektep say that people should learn to accept the new geopolitical reality. Kazakhstan has said the textbooks will undergo “expertise”, but has given no indication it will recall or alter them.

While Kazakhstan has officially recognized the territorial integrity of Ukraine from the beginning of the Ukrainian crisis, it has also tried to avoid direct criticism of Russia, an important neighbour and ally.

And if diplomacy is one difficult line to tread for Kazakh President Nursultan Nazarbayev and his subordinates, another is the juxtaposition of potential separatist sentiment among the Russians living in the country's north, and anti-Moscow sentiment among Kazakh nationalists.

One commenter on the Kazakh service of RFE/RL, Azzatyq, asked whether the creators of the geography textbooks would take the same pragmatic stance towards international law in the event of the annexation of northern Kazakhstan:

Interesting – how would those goofy academics consider the issue of the annexation of the northern provinces of Kazakhstan by Russia? Of course a referendum for such an accession would be supported by 80% of population. And the Russian State Duma would then ratify it. Would those academics then say: according to the results of referendum N of month N in year N, several parts of northern Kazakhstan joined Russia. Was there a referendum? Yes. Did the parliament ratify it? Yes, it did.

Politics swallows everything in this country, even history. Let us rid ourselves of these puppet-historians!

The discussion continued on Facebook, where Ulan Dzhumaliev asked:

Who has recognized Crimea as a subject of Russia? If Nazarbayev ordered recognition, then this is his problem. No one else around has recognized [Crimea as part of Russia]. If tomorrow the north of Kazakhstan will rise up and join Russia, what then?

Alexey Koshtura tried to defend Russian policy and condemn people who call the annexation of Crimea an occupation:

Why do you say [Crimea] was occupied by Russia? Have you been there to say it? Go for a holiday there and talk to local people there. They had a referendum. People voted for re-unification with Russia. What occupation are you talking about?

A famous Kazakh nationalist Facebook page Qazaq Horde reacted to the scandal the day it broke on September 23: 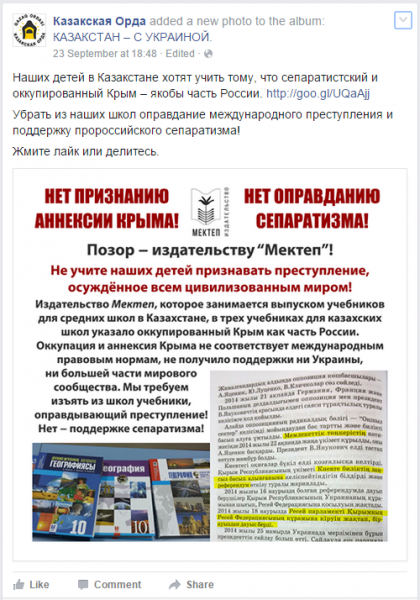 Shame to the publishing house Mektep! Do not teach our children to approve a crime condemned by all of the civillized world!

The publishing house Mektep which produces textbooks for secondary schools in Kazakhstan, marked Crimea as a part of Russia in three of its textbooks for Kazakh schools.

The occupation and annexation of Crimea does not conform to international legal norms, and has not received support from either Ukraine or much of the world. We demand to remove textbooks that justify the crime from schools! No to the support of separatism!

Then, in a more virulently anti-Russian post, Qazaq Horde publishes a video that shows Nazarbayev with Ukrainian Prime Minister Arseniy Yatsenyuk and Belarusian President Alexander Lukashenko talking about the 1996 Budapest Memorandum, an agreement between Ukraine, Kazakhstan, Belarus and the permanent members of the UN Security Council to respect mutual territorial sovereignty. 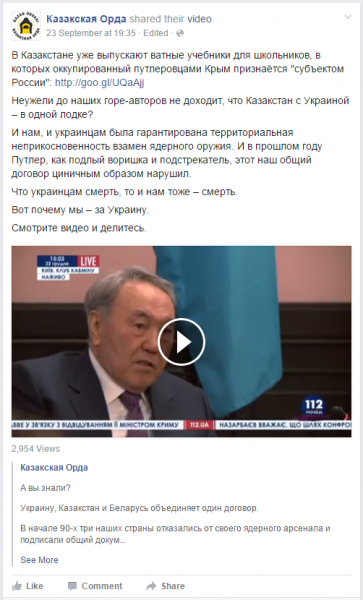 “Vatnik” [derogatory term for pro-Kremlin enthusiasts] textbooks for schoolchildren are already being published in Kazakhstan, in which Crimea, occupied by “Putler” [derogatory term likening Russian President Vladimir Putin to Hitler] and his followers, is recognised as “a subject of Russia”. Don't our stupid authors understand Kazakhstan and Ukraine are in the same boat? Territorial integrity was guaranteed to both us and the Ukrainians in exchange for our nuclear weapons. And last year Putler, the sneaky pilferer and instigator, cynically violated this mutual treaty.

What is death to Ukrainians will be death to us too.
This is why we are for Ukraine.
Watch and share this video.

Famous Kazakhstani journalist Sergei Duvanov, known for a series of muckraking articles about President Nazarbayev and other high-level officials from Kazakhstan known as Kazakhgate, supported Ukraine's response to the textbooks’ appearance and doubted the loyalty of their authors to the state of Kazakhstan. 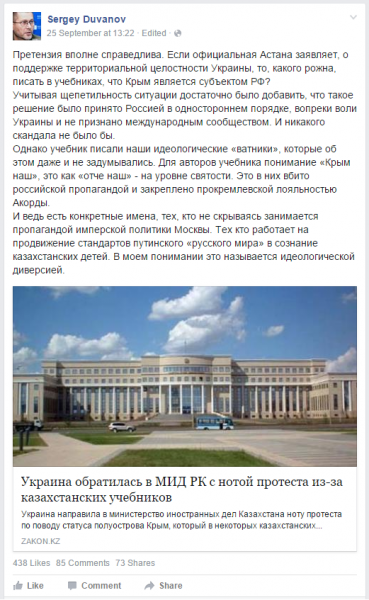 The note [of Ukrainian government] is justified. If Astana [Kazakhstan] claims it supports the territorial integrity of Ukraine, than why the rush to create such textbooks where Crimea is marked as a subject of the [Russian Federation]?

Taking into account the niceties of the situation it would be enough to mention [in the textbooks] that such a decision was made by Russia unilaterally and has not been recognized by the international community. There would be no scandal then.

However, the textbook was written by our ideological Vatniki, who did not even think about that. For these authors the idea “Crimea is ours” is like the Lord's prayer — it has reached some sort of sacredness. It was knocked into them by Russian propaganda and consolidated by the loyalty of Akorda [the Office of the Kazakh President] to Russia.

There are specific people who promote the propaganda and imperial policy of Moscow openly. People who are working for the promotion of Putin's “Russian World” into the minds of Kazakh children. In my opinion, this is ideological sabotage.

It will be interesting to see if Kazakhstan officially changes its position on Crimea in the future. Kazakhstan and the other states of ex-Soviet Central Asia shocked Moscow by failing to recognise the independence of statelets of Abkhazia and South Ossetia (officially part of Georgia) in 2008, in what the International Crisis Group called “a quiet revolt by Moscow’s most docile allies, abetted by China.”

But Russian pressure on its allies regarding Ukraine has been growing. Moscow has strongly encouraged members of its Eurasian Economic Union trade association (Armenia, Belarus, Kazakhstan and Kyrgyzstan) not to attempt to import or re-export products from Ukraine and the West. Meanwhile, a Dutch lecturer at the Nazarbayev University in Kazakhstan's capital Astana, an institution that prides itself on its academic independence, claims he was effectively sacked for trying to host a talk on Ukraine.