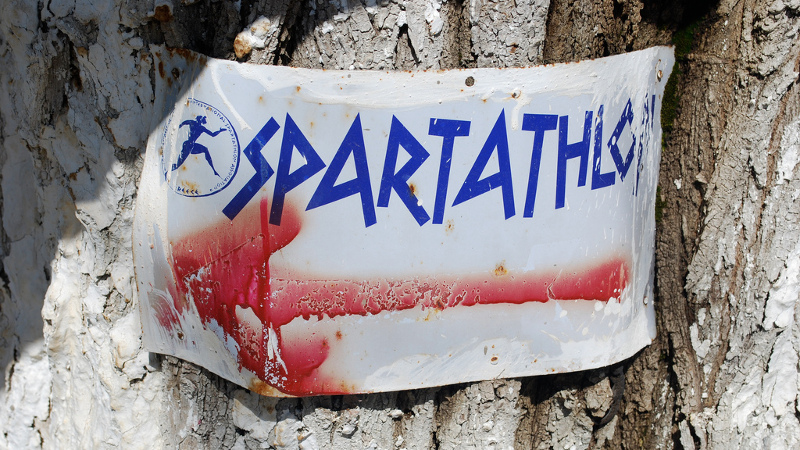 Οn 25th and 26th of September the small town of Sparta [1] in Greece held its 33rd annual Spartathlon [2] race, an ultramarathon where runners depart from the Acropolis hill in Athens and, taking a route that passes through Corinth, Nemea, Lyrkia, Mount Parthenio, Nestani and Tegea, eventually arrive in front of the statue of Leonidas in Sparta. Although this ultramarathon is less known than the Marathon Race [3], every year hundreds of athletes gather from every part of the world in order to participate and compete. This year, of the total of 387 runners who participated, 174 athletes managed to reach the finishing line.

The history that inspired the race

In 490 BC during the Battle of Marathon [4], an Athenian messenger named Pheidippides [5] was sent to Sparta in order to seek help in a struggle against the Persians.

While still in the city, the generals first sent to Sparta the herald Pheidippides, an Athenian and a long-distance runner who made that his calling. […] This Pheidippides was in Sparta on the day after leaving the city of Athens, that time when he was sent by the generals… 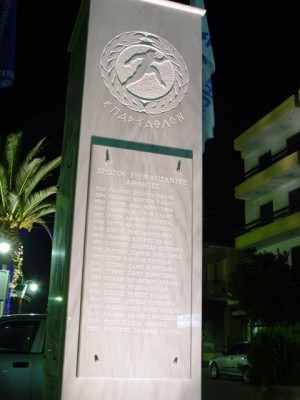 Monument in Sparta with names of Spartathlon winners. Image taken from Wikipedia.

The above passage in Herodotus [6]‘ Histories made British Royal Air Force Wing Commander John Foden—a philhellene [7], a student of ancient Greek history, and a long-distance runner—wonder in surprise if in modern days a human could actually succeed in departing from Athens and reaching Sparta by running a distance of 246 kilometers in just two days.

In 1982, Foden arrived in Athens along with a team of four other RAF colleagues in order to officially recreate and run Pheidippides’ route as closely as possible to Herodotus’ historical description. On the 9th of October, 1982, after having run for 36 hours, John Foden and two of his colleagues reached the finishing point, the statue of Leonidas in Sparta, proving that a human could indeed cover such a distance in the allotted time period.

Foden's success led to the establishing of “The Spartathlon”, which has been described as the world's “most grueling race,” as the official site [8] of the marathon explains:

[It] runs over rough tracks and muddy paths (often it rains during the race), crosses vineyards and olive groves, climbs steep hillsides and, most challenging of all, takes the runners on the 1,200 meter ascent and descent of Mount Parthenio in the dead of night. This is the mountain, covered with rocks and bushes, on which it is said Pheidippides met the god Pan. In 2,500 years man has had no impact at all. There is still no pathway over the mountain that is swept by strong winds with temperatures as low as 4°C.

The ideal of participation

The race is held on the last Friday of September at 7:00 am, since Herodotus in his narration places the event near that time of the year. The aim is to cover the course within the 36-hour limit, passing through 75 cut-off time checkpoints in total. Ultrarunners from Europe, America, Canada, Japan and Australia train for years to get fit enough to participate, but the marathon tests even the finest athletes’ limits.

Near the final stages, when extreme fatigue gets the best of them, the runners are often known to hallucinate and lose all sense of time and reality. Many describe it as “running on auto-pilot,” not having total control of their body. Only 1/3 of the participants on average actually finish the race. The video documentary below shows the exhaustion and commitment of the athletes running the Spartathlon:

But despite all the difficulties, long-distance runners from all over the world dream of participating in the marathon and train hard to meet the race's demands.

This is my dream! But I do not know if I will ever face the challenge. Athens—Sparta: 246 km

Yannis Kouros [26], the winner of the first Spartathlon in 1983, who participated four times in total and won first place every time, holds the marathon's time record till this day (20:25:00, 20 hours and 25 minutes) and is featured in the short film “Forever Running.”

When asked how he achieved the impossible, Kouros answered:

When other people get tired, they stop. I DON'T. I take over my body with my mind. I tell it that it's not tired and it listens.

Thirty Greek athletes reached the finishing point of the 2015 Spartathlon, with Nikolaos Petropoulos being the first to touch the statue of Leonidas.

Dimitris Koutios shows us his human side as he finishes at 34:30. He is now a Spartathlete! #spartathlon [18] pic.twitter.com/dsVMk71wND [34]

Among the finishers were the two Spartan participants, Giannis Dimopoulos and Christos Masouras, making their hometown particularly proud of their achievement. 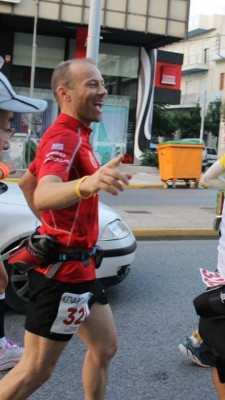 Giannis Dimopoulos on the road to his personal victory. Image from his Facebook [36] page.

Masouras the Spartan and Spiros Pappas together in 35.10 #spartathlon [18] pic.twitter.com/K47shEyLCs [37]

Ultrarunners, their relatives, and friends shared their joy and experience on Twitter, sending the profound message that this race is about friendship and peace as well, where religious, racial or any other type of discrimination has no place:

Huge congratulations to Dan and the Lawson family for their race and perseverance. True Spartathletes #spartathlon [18] pic.twitter.com/KVjzCzsL0c [50]

Kept the best one for the end, one of the most beautiful and romantic moments:

A first for the books!!!! He proposed after finishing the #spartathlon [18] This wedding will last forever! pic.twitter.com/9pVwu3pbyA [54]

During Spartathlon, each athlete confronts his own strength and limits, a personal experience in which, even upon fulfillment, words fail to describe the grandeur of all the emotions. There is no cash prize in the race. All runners are aware of this, and yet run for the ultimate prize of glory and the satisfaction of making it till the end. They win a humble olive crown, as well as applause of appreciation and respect from the Spartans as they become Pheidippides’ successors. Spartathlon is a supreme physical and spiritual struggle, a struggle of pure values, as imposed and inspired by the ancient spirit of noble competition and respect towards the goal and one's fellow athletes.