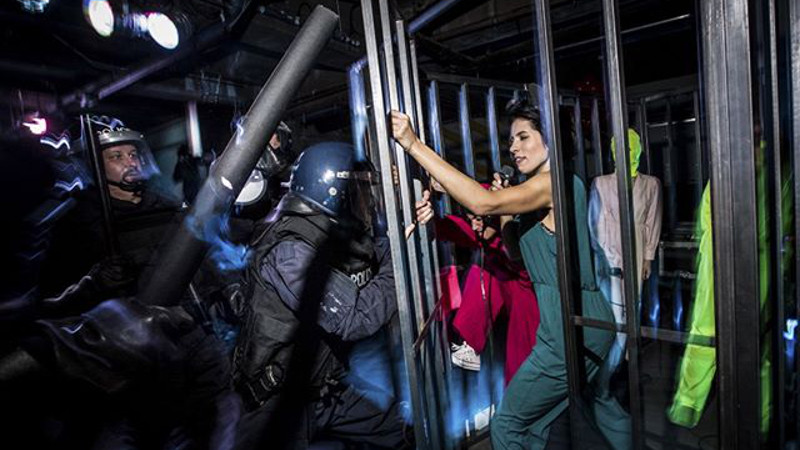 Punk group Pussy Riot perform in a cage on stage at Dismaland. Photo by Vianney Le Caer for Pussy Riot.

Pussy Riot, the Russian punk collective whose members have spent time in prison for singing a song critical of President Vladimir Putin in an Orthodox cathedral, staged a poignant performance piece for the closing day of Dismaland, a UK-based temporary dystopian “bemusement park” created by graffiti artist Banksy in the seaside town of Weston-Super-Mare.

Nadezhda Tolokonnikova and Maria Alyokhina, two of Pussy Riot's frontwomen, are now better known as political activists advocating for the rights of prisoners in Russia, having founded the MediaZona project monitoring human rights abuses in Russia's penal system. Their September 26 performance at Dismaland was also human rights-flavored—but this time, they called attention to the plight of the many refugees from countries like Syria, currently seeking a safe haven in Europe.

Hey yo! In a couple hours we will be with a very, very violent set and a special message at #Banksy‘s #Dismaland pic.twitter.com/r4pgrfxl8E

The performance, staged by Pussy Riot in collaboration with British art collective The Connor Brothers, featured a song called “Refugees In,” meant to show solidarity with those seeking shelter in times of crisis. The music was the soundtrack to a truly epic theatrical production featuring actors dressed as protesters and police engaged in a struggle, and the Pussy Riot performers in cages, sporting their trademark colorful balaclavas.

Pussy Riot's performance in Banksy's park looks something like this.

Members of Pussy Riot said they intend to continue showing their support for refugees from countries with repressive political regimes. “Regardless of one's political views, we have a moral duty to offer refuge to people fleeing war and persecution,” Pussy Riot said in a statement to the press. “We recognize the challenge faced by Europe in accepting hundreds of thousands of displaced people, but this is more than a political challenge—it is a humanitarian crisis and as such, we must act together and rise to the challenge.”

Video of the performance, captured by Russian journalist Ilya Varlamov, gives a taste of the spectacle.

Pussy Riot told reporters that the Dismaland show was only the beginning of their refugee activism. In October, together with their collaborators The Connor Brothers, the collective intends to visit the “jungle” refugee camp in Calais, France (the timber and fixtures from the Dismaland park are also headed to Calais to help build shelters for refugees).

Having experienced persecution during the 2 years we spent in a Russian prison and after repeated attacks by Russian authorities, we feel solidarity with those who suffer under oppressive regimes, and believe we have a moral duty to pressure governments into developing a united and comprehensive plan that puts humanity before politics.

The punk troupe also performed three other songs and dedicated their Dismaland performance to the memory of late Lyonya Ye****ty (F*cked Up Lyonya), the member of a fellow Russian art group “Voyna” (War), who died in an accident earlier in September.