Greece’s Latest Transport Deputy Minister Was Too Racist, Homophobic, and Anti-Semitic to Keep His Job 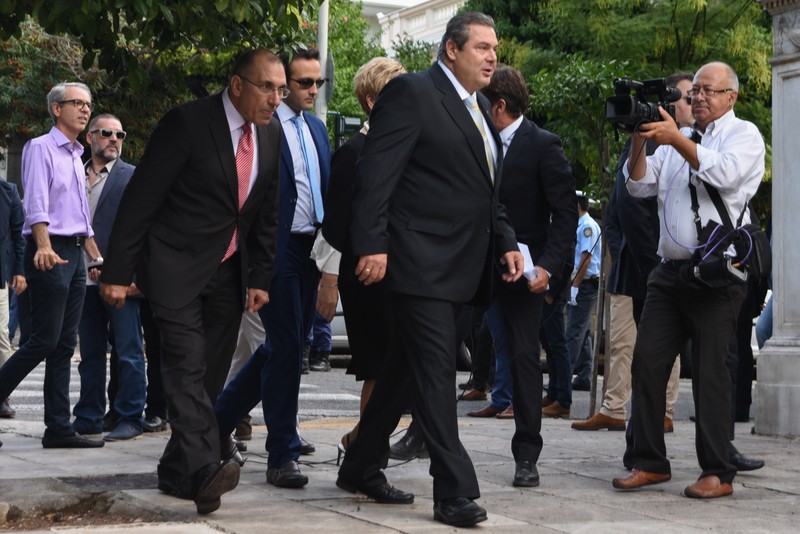 Cabinet members are sworn in for the third cabinet of Alexis Tsipras and the first after his re-election. At the Presidential Mansion in Athens, Greece on September 23, 2015. Minister of Defence Panos Kammenos and State Secretary of Infrastructure Dimitris Kammenos. Photo by Wassilis Aswestopoulos. Demotix (c).

In less than 12 hours after being appointed as deputy minister of Infrastructure and Transport in the newly formed Greek government, Dimitris Kammenos was forced to resign. His term in office is the shortest ministerial tenure in recent Greek history. His resignation was announced on Twitter, following the demands of Prime Minister Alexis Tsipras, who at the time was in Brussels for a summit of European Union leaders about the Syrian refugee crisis.

Until the truth about the case of the anti-Semitic and racist posts is spoken, the deputy [minister] will facilitate the government's work with his resignation.

The reason for the sudden ouster were revelations that, over the past two years, Kammenos published on a now-deactivated Twitter account, @portaporta (“door-to-door”), several racist, anti-Semitic, and homophobic remarks.

Dimitris Kammenos is a member of the right-wing Independent Greeks party, which is the junior coalition partner to Alexis Tsipras’ leftist Syriza party—a controversial alliance that is gradually becoming a liability for Tsipras, who is now being criticized for failing to vet his ministerial appointments properly.

Everyone knew about Dimitris Kammenos's (aka #portaporta) antisemitic & homophobic slurs – everyone, apart from the PM who appointed him.

I think @atsipras just won entry in the Guinness Book of Records as the most cynical politician ever. #PortaPorta

Somebody should inform the Prime Minister about future candidates’ tweets before they're given ministerial duties. This is a phenomenal ridicule.

The tweets that sealed a swift end

Among Kammenos’ notorious tweets were insults directed at Prime Minister Alexis Tsipras, whom he called a criminal. Kammenos cast aspersions on Tsipras’ leftist ideology, as well.

He calls Tsipras a criminal and he insults the leftist ideology. Then why did he accept the ministry?

In another tweet, Kammenos damned to hell any Greek citizens participating in gay pride marches.

The success in choosing ministers CONTINUES!

Venturing into the land of conspiracy theories, Kammenos also expressed his firm belief that the events of September 11, 2001, were a Jewish plot. 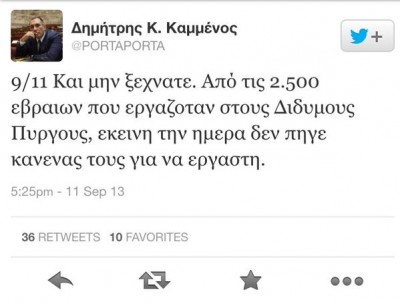 The tweet reads in Greek: “And let's not forget. 2.500 Jews were working at the WTC and on that day not even one came into the office.”

Perhaps the most problematic of all Kammenos’ tweets was a photoshopped image of the Nazi concentration camp at Auschwitz, where the German slogan “Arbeit macht frei” (“Work will set you free”) is replaced by the Greek phrase “”Μένουμε Ευρώπη” (“We’re staying in Europe”), which was popularized during Greece's recent referendum period, when some wished to compare the Greek economic crisis to the Holocaust. 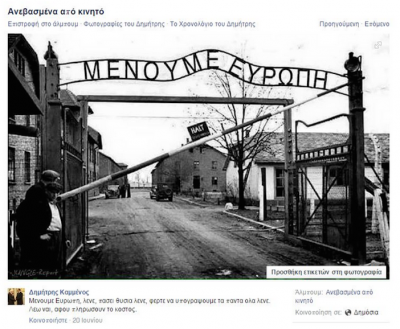 Photo caption reads in Greek: “We're staying in Europe they say, at any cost they say, bring us to sign anything they say. I say yes, but they should pay the price first.”

The reaction of the Central Board of Jewish Communities in Greece, published on June 24, 2015, was fierce:

The Central Board of Jewish Communities in Greece expresses the outrage and the repudiation of the Greek Jewry at the shameful photo posted on Facebook by MP Dimitris Kammenos (of the Independent Greeks – ANELL party). The post trivializes in the most hideous way the sign over the gate of Auschwitz. In the photo posted the “We stay in Europe” moto has replaced the world known sign which “welcomed” 1.500.000 Jews who were tortured and exterminated by the Nazis in the gas chambers. We call upon the President of the Greek Parliament and the representatives of all democratic parties to condemn the malevolent trivialization of the Holocaust of the 6 million Jews and all the victims of this barbarity, a trivialization that at the same time downplays the importance of the struggle against Fascism and Nazism in our country. We must not stay indifferent to such phenomena because if our society allows the distortion of the historical truth and memory of the Holocaust, it would have been as if we reopened the gate of Auschwitz to new crimes against humanity.

In an attempt to defend himself, Dimitris Kammenos claimed that not only his Twitter account, but all his social media profiles are handled by a team of 15 people, which has led to numerous hackings and “distortions of the truth.” So far, the public has showed little interest or trust in Kammenos’ explanations and excuses.

I must say I fell for him. Yesterday I liked a chick's pic and told my wife they hacked my facebook.

Seriously now, how long did it take him to come up with the “hacking” excuse? Dork.

He denies all racist tweets, claiming he was hacked, convincing every last one in doubt, since fascists are known cowards.

Ιn the era of social media, in which citizens now can raise their voice loudly and visibly against anything unjust and unethical, politicians are no longer the omnipotent and “untouchable” figures they once were after their election.