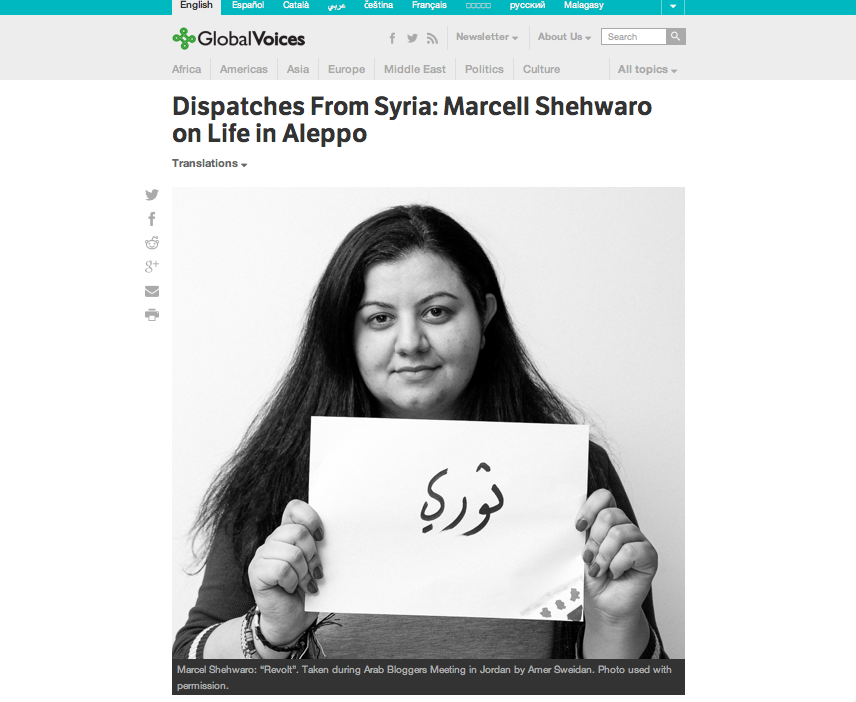 We are thrilled to announce that the Global Voices series Dispatches From Syria: Marcell Shehwaro on Life in Aleppo [1] has won a 2015 Online Journalism Award [2] (OJA) in the category of Online Commentary. The win was announced [3] on September 26 at the OJA awards ceremony in Los Angeles.

The series’ writer, Syrian activist Marcell Shehwaro [4], received strong support from the Global Voices community while crafting the 12-part series, which was started in 2014 and published on our then newly launched section, [5] The Bridge, [6] which features original writing from the unique perspective of our community [6] members around the world.

Marcell's essays were translated from the original Arabic into English by Amira Al Hussaini [7] and Lara Al Malakeh [8], and edited by Georgia Popplewell [9]. Many members of our Lingua community helped in the subsequent translations into Spanish, Hebrew, Arabic, French, Chinese, Korean, and German.

During the award announcement [3], the judges were quoted as saying that “the writer's intensely personal writing found the gray areas in a war usually told from polar extremes.”

The OJA awards have been honoring excellence in digital journalism around the world since 2000, and are administered by the Online News Association (ONA). [10] Our managing editor Sahar Habib Ghazi accepted the award at the ONA 2015 banquet in Los Angeles.

After learning that the checkpoint where her mother was murdered by Syrian regime soldiers has been obliterated by a bomb, Marcell writes in her nominated piece, [26] “my ability to survive depends upon the death of others…and this is how the murderous regime will ultimately win, regardless of what political change awaits Syria.”

Global Voices’ executive director Ivan Sigal [27]explained the importance and relevance of Marcell's series in the nomination essay that accompanied the ONA submission. Here's an excerpt:

Marcell is part of a community of writers and digital activists who participated in the original nonviolent reform movement in Syria. They are digitally networked journalists and activists closely tied to reform movements in other parts of the Middle East, and their habits of communication and communities are based in the culture of the Internet. As such, Marcell’s work is emblematic of the idea of online journalism – allowing us to hear voices and stories of people who had previously been subjects in the stories of outsiders. Marcell's voice is that of an insider reflecting her experience of the war in Aleppo for a global audience. Against the odds she and her peers continue to insist on the need for human dignity, and on the power of stories about individual lives in the face of extreme violence and geopolitical manipulation.

The framing of Marcell's essays runs counter to a presentation of the Syrian war in which stories about extremism and polarization are emphasized. We rarely hear about the nuances and complexities of the lives of individual Syrians. In her writing, Marcell's voice turns and winds through her days as she struggles to survive and make sense of the collapse of her world, the murder of her mother at a government checkpoint, the dilemmas of her friends and their families, and dreams of a forgone past. She brings us the complexity of Syrian society, showing us the fractures, alliances and impossible choices made by individuals living through war. Her stories again and again shatter the reality of those choices, the knowledge that making them requires people who in normal times might be fair, compassionate and caring to choose violence as a means of security.