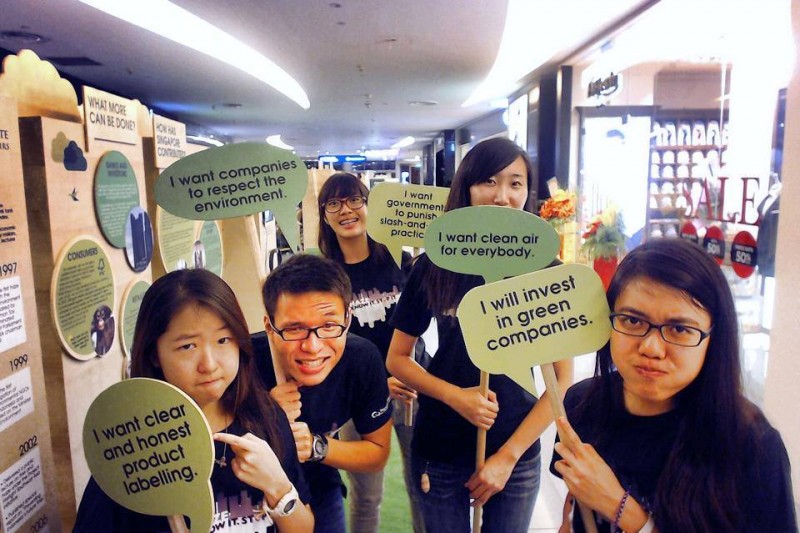 Youth volunteers who pledged for a haze-free environment. Photo from the Facebook page of People's Movement to Stop Haze.

As haze pollution from burning forests continues to spread across Southeast Asia, some consumers in Singapore have pledged their commitment to stop supporting companies that are involved in unsustainable agricultural production. In particular, consumers said they will boycott the products of palm oil companies that are causing the deforestation in the region.

The transborder haze has become an annual problem in Singapore, Malaysia, and Indonesia because of prolonged drought and forest fires. The latter are blamed on the “slash and burn” practice of farmers and the land clearing operations of palm oil plantations in Indonesia. But aside from Indonesia, the responsibility to stop the burning of forests is also shared by Malaysia and Singapore, since some companies registered in these countries are financing the palm oil production in the region.

A campaign initiated by environmental “green” groups asks consumers to stop buying products that contribute to the haze pollution:

As consumers, we can contribute towards our collective fight against haze pollution by making informed and responsible purchases. The haze is caused by toxic smoke from fires raging in South-east Asia’s forests and peatlands, which are cleared for agricultural development. For instance, plantations in our region supply much of the world’s palm oil, a key ingredient in food products and cosmetics. Consumers can make a difference by supporting products that are sustainably sourced.

The People's Movement to Stop Haze lists five things that consumers can do to reduce haze pollution:

The campaign involves educating the public about making purchases that do not harm the environment. This is also the aim of the “We Breathe What We Buy” movement which reminds consumers that they can pressure companies to invest in “haze-free” production of palm oil.

Photo from the Facebook page of People's Movement to Stop Haze.

The eco-conscious campaign is also being promoted on social media through the hashtag #XtheHaze.

The tweet below features a GIF (animated image) that encourages consumers to buy haze-free beauty products.

This video ad highlights the impact of the haze pollution on ordinary citizens.

The haze had worsened last week, which forced many schools and offices to suspend work in Singapore. Responding to the demands for more decisive government action, Minister of Environment and Water Resources Vivian Balakrishnan identified the companies suspected of being involved in the forest fires and ordered them to immediately address the problem.

We will therefore expect companies to be more transparent about their supply chains, particularly those involved in the palm oil and forestry sectors. Ultimately, errant companies must know that there is a price to be paid for damaging our health, environment and economy.

Writing for the alternative news website The Online Citizen, Terry Xu, urged the Singaporean government to work closely with Indonesian NGOs and villagers to stop the spread of forest fire.

What the Singapore government could probably do is to engage with the NGOs in Indonesia and to work out a plan to monitor errant companies. It could also help provide jobs for villagers who would be willing to work as firefighters and watchmen of the plantations to prevent fires or to testify against companies who run afoul of the law.