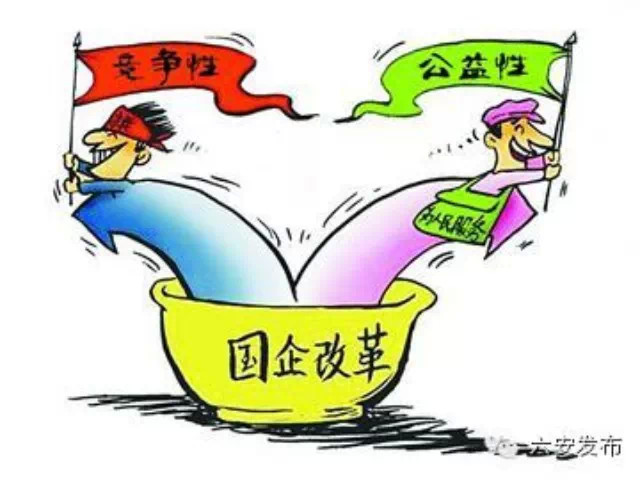 A cartoon circulated widely online depicting the contradiction in enhancing both competition and public ownership. Non-commercial use.

The Chinese government has finally introduced a concrete reform plan for its state-owned enterprises (SOEs), but any economists who were hoping for privatization will be sorely disappointed.

Though both China’s slowing economy and the rampant corruption in SOEs make the reform imperative, some economists have found the measures too conservative, failing to break with the traditional ideological limitations on business and hit at the benefits of vested interests.

According to the document, released on September 13, China will seek to modernize its state-owned enterprises, enhance state assets management, promote mixed ownership, and prevent the erosion of state assets.

The government will set up several state-owned capital operating companies, similar to Singapore's “Temasek-style” SOEs. The State-Owned Assets Supervision and Administration Commission will no longer directly intervene in the running of most SOEs and the role of the government will be shifted from “management of assets” to “management of capital” through the state-owned capital investment corporations.

At the same time, the document also stresses that “the Party leadership over SOEs is vital in ensuring the socialist direction of their development and enhancing their competitiveness and competence.” To this end, “the statutory status of the Party organizations in firms should be clarified in corporate governance structure.” Instead of privatization, the new plan emphasizes the strengthening of public ownership.

This approach reflects contradictions inherent in the 2013 economic reform blueprint, which called for giving markets a “decisive role” in resource allocation while preserving a “dominant role” for the state sector.

In Twitter-like Weibo, many economists, in particular those who believe privatization plays a vital role in overhauling the SOEs and reshaping the country's economy, have criticized the guidelines for their failure to resolve the existing corruption problems of the SOEs.

Liu Shengjun, a famous reformist economist questioned the stress on party leadership and called for a deeper ideological emancipation to further push the SOE reform:

Ideological emancipation would be the key to achieving SOE reform progress. As for the conceptual obstacles for SOE reform, we must launch a serious debate about two problems: Will SOE growing bigger and stronger be favorable for allowing markets to play a decisive role in China’s economic transformation? Will adhering to the party’s leadership strengthen the party organization’s role in SOEs? We need a new ideological emancipation campaign to answer these two questions.

Sheng Hong, Director of Unirule Institute of Economics, an independent think-tank, believes that the SOEs’ corruption problem cannot be resolved without challenging their monopoly status:

The state-owned monopolies occupy the majority of the country’s resources, leading to annual loss of trillions of yuan. The economy has slowed largely because of the existence of state-owned monopolies and the protection of these monopolies. This is an imperative problem, costing about ten billion yuan a day. Why does the government carry out reform if they don’t want to solve this problem?

Reform is meant to solve problems, but this plan doesn’t address those issues I have talked about, such as SOE monopoly, SOEs using state-owned resources for free and at a low price, not turning over profits, not limiting allocations inside SOEs. These are the real problems. In my opinion, what’s more serious is that the existence of SOEs in itself is a problem.

The current economic slowing proves it’s tough for China to maintain high economic growth unless the government overhauls the growth model. Secondly, the SOEs’ monopoly in key industries has generated wide complaints. A great deal of studies have proved SOEs are less efficient than private companies. I believe the Chinese economy could meet with big trouble if private companies can’t dominate the markets.

Zhang Wenkui, a research fellow in the Development Research Center of the State Council doubted whether the Singaporean Temasek-style SOE model could work in China:

Having studied Temasek for over a decade, it's clear China can’t replicate its success. Temasek can sell off its SOEs if they underperform or if it needs to invest into other areas. Temasek’s independent operation has been guaranteed by the legal system of Singapore, basically fending off government and officials’ interventions. It’s very tough for China to learn these two core factors.

Wu Jinglian, a prestigious reformist economist sought to persuade the CCP to drop the Soviet model of the socialist economic principle:

In a letter “On the redefinition of Socialism” to the Party Central Committee, I argued that the rhetoric that “state ownership is the advanced form of public ownership, the aim that socialism must pursue” is the definition from the Soviet Union’s textbook and is wrong. I agreed with Deng Xiaoping that “the essence of Socialism is to gradually realize common prosperity.” Socialism has nothing to do with the ratio of public ownership!

Wu further argued that the party-state monopoly of the economy could eventually lead to crony capitalism:

Reform is meant to break the “State Syndicate” (party-state monopolies). The current Chinese economy is actually the state capitalism claimed by Lenin: Despite the existence of markets, the state controls all the “commanding heights” of the economy, often called the “lifeblood” of China. Although China has built the socialist market economy, it bears the heavy legacy of old system, so that “as the state sector advances the private sector withdraws.” If it continues to develop [this way], China will become a system of crony capitalism.