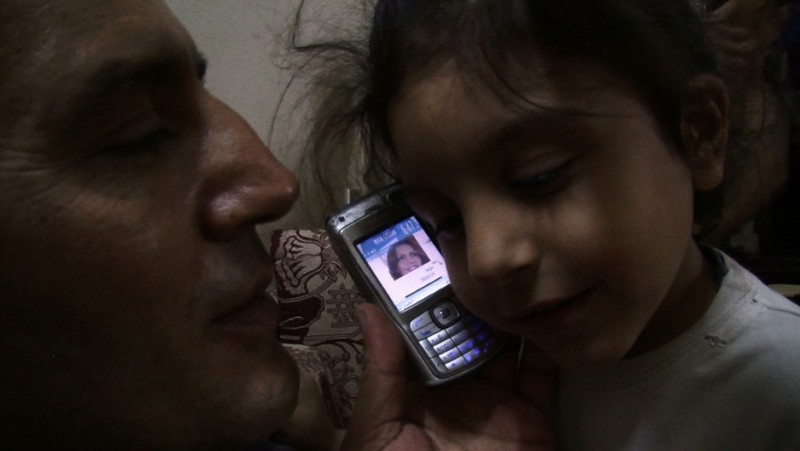 This article and radio report by Leo Hornak for The World originally appeared on PRI.org on September 24, 2015, and is republished here as part of a content-sharing agreement.

The scale of the Syrian tragedy is difficult to comprehend: more than 200,000 dead, 6 million internally displaced, 3 million more living as refugees.

Now an award-winning new film is seeking to bring home the personal consequences of the war for ordinary people.

Since 2009, before the start of the current conflict, the British film-maker Sean McAllister has been filming the daily lives of one family based in Damascus.

Amer Daoud and his wife Raghda Hassan first met and fell in love as political prisoners in the cells of a Syrian prison 15 years ago. After their release they married and had a family.

McAllister’s camera has been with them and their children through every step of Syria’s revolution, its civil war and the family’s final exile in Europe.  The resulting documentary is called  “A Syrian Love Story.”

McAllister says that he had already begun filming the family when the revolution began. “I got a call saying  ‘Do you know what? It’s starting in Syria!’ — and the first people on the streets were Amer and his son Kaka, and they had both been arrested.”

Eventually the family is freed, but Sean himself is arrested and held in a Syrian jail for a week. As a result, the authorities discover who he has been filming, and Amer, Raghda and the children are forced into exile for their own safety.

As the family tries to adapt to new countries and new environments, the strain begins to wear on the Amer and Raghda’s marriage.

In spite of the suffering it shows, McAllister still sees his film as ultimately optimistic: “I think the message of hope is in the defiance — the defiance of one family, who have all pulled through.”

He believes that films that humanize migrants and refugees are more important than ever. “We see on the television people washed up on the seashore. Amer and Raghda give a voice to all these people you see on the news.”