Welcome to India’s War on Malnutrition 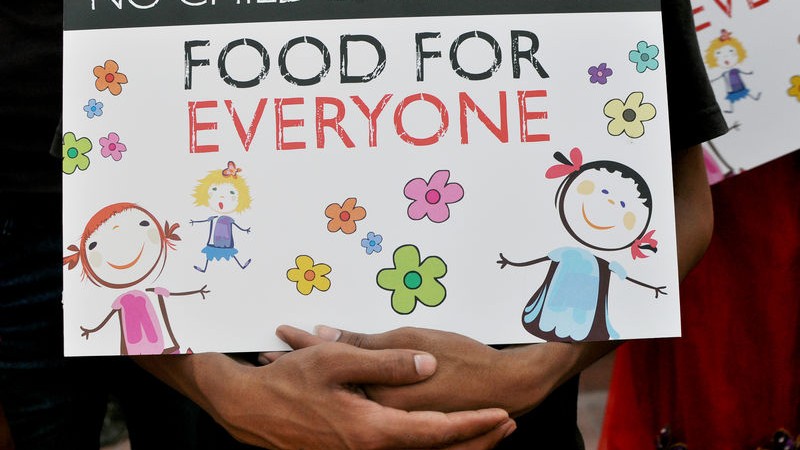 Puja and Arti are seven-month-old sisters. They were born in a small village called Madhubani Ghat in the East Champaran district of the Indian state of Bihar. Their parents, Sabita and Hari Giri, are illiterate and belong to a socially-excluded community, leaving them without many of the means necessary to their children's health. As part of a UNICEF program in the village, both the twins were screened for severe acute malnutrition (SAM) and it was determined that Puja and Arti were SAM cases. They are not alone.

Twenty percent of Indian children under the age of five suffer from wasting (low weight for height) due to acute undernutrition, which is more than one third of the world’s children who are found wasted. According to UNICEF's recent Rapid Survey on Children, about 30 percent Indian children under five years are malnourished. With all its economic growth and technology boom, these malnutrition figures are thoroughly uninspiring for a country rising in so many other areas.

Apart from providing midday meal schemes in schools, there are a handful of other efforts to curb malnutrition, such as Integrated Child Development Services (started in 1975), the National Children’s Fund (created during the International Year of the Child in 1979), the National Plan of Action for Children, the National Rural Health Mission, and the United Nations Children’s Fund.

India observes National Nutrition Week annually from September 1 to 7, when the country tries to boost awareness about the importance of nutrition and its far-reaching implications on development, productivity, economic growth, and ultimately national development. This year, the theme was “Better Nutrition: The Key to Development” and the emphasis was to raise awareness about malnutrition, healthy diets, and measures that would curb malnutrition. As part of the program, the Food and Nutrition Board through its 43 Community and Food Nutrition Extension Units present in each state and Union territory, coordinating with NGOs and other departments to organize workshops, orientation trainings of field personnel, awareness generation camps, and community meetings about better nutrition.

Each state in India has come up with its own plan to tackle malnutrition. According to new data, India’s nine poorest states have successfully reduced the number of underweight children over the last decade.

Launched in 2013, the Chhattisgarh state government’s “Phulwari scheme” for children between ages of 6 months and 3 years aims to keep children healthy by providing proper nutrition. The scheme was planned to be implemented in 85 tribal development blocks of 19 districts, with 2,850 Phulwari Centres and Rs. 10 crore (about 1.5 million US dollars) was allocated for the centers. Similarly, the Nawa Jatan scheme in Chhattisgarh was designed to combat malnutrition, where UNICEF provided technical help through its consultants by conducting a base-line survey in around 340 village panchayats where the malnutrition rate was reported to be high. The population of Chhattisgarh is 26 million people, with tribal people making up more than 30 percent of the total. Nearly a third of the local children are malnourished, but recent figures show a substantial decrease in the number of malnourished children, thanks in large part to these new projects.

#Chhattisgarh‘s 1st of its kind, ‘Phulwari’ Scheme has managed to achieve significant success in eradication of malnutrition.

.@ChouhanShivraj should learn from Chhattisgarh where kids in tribal areas are being fed eggs through Phulwari scheme http://t.co/ODNvEyOzzL — Supriya Sharma (@sharmasupriya) June 1, 2015

According to the latest survey by Census of India and Clinical, Anthropometric and Biometric (CAB), these projects in Chhattisgarh have succeeded in lowering the percentage of stunted and underweight children under the age of five years from 53 percent to 35 percent and from 53 percent to 39 percent, respectively.

India’s largest state, Rajasthan had 44 percent of children under the age group of 3 years as underweight, according to National Family Health Survey. The state government has setup 38 Malnutrition Treatment Corners (MTCs) with the aim of improving management of severely malnourished children at the level of district hospitals. According to a State Institute of Health & Family Welfare document, 13,200 malnourished children have been taken care of under this program.

In an effort to distribute supplementary food enriched with vitamins and minerals for undernourished children, Global Alliance for Improved Nutrition, the United Nations World Food Programme, and the Indian government have set up the Banswara Factory as a model for producing supplementary food. The factory, owned and operated by ten local women, produces Raj Nutrimix—a mix of flours, wheat, and sugar fortified with essential micronutrients which are also palatable to children. Thirty metric tons of Raj Nutrimix enriched with vitamins and minerals feeds 6,000 children under the age of three and nearly 3,000 pregnant or lactating women on a daily basis, thanks to Rajasthan State Government’s social welfare program. The government is also turning to organic farming and has an ambitious plan to dedicate thousands of hectares of land to farming organic crops, in order to tackle the twin issues of protein malnutrition and unsustainable chemical fertilizer-based farming.

Rajasthan plans to open 10 more #HumanMilkBanks to combat against #malnutrition. An effective step to invest in future of country- Children.

According to a recent survey, there are 4,300 children in Rajasthan aged between 6 months to 5 years with severe acute malnutrition (SAM) and in need of medical or supplementary intervention.

India’s least developed state, Bihar faces a serious malnutrition crisis. According to the consolidated revised National Rural Health Mission report 2012-13 for Bihar, around 80 percent of children under five are malnourished. Low intake of nutritious food, non-availability of quality health services, the absence of adequate community workers, low institutional delivery, and a lack of access to cheap medicines have all contributed to high malnutrition rates in the state.

Since 2012, the Bihar Government has been working on a three-pronged strategy to curb malnutrition. In all 38 districts, the government has setup 30-bed nutritional rehabilitation centers focusing on acute malnourished children. Early marriage, non-spacing of children, and a lack of breastfeeding, too, contribute to malnutrition and the programs under the Integrated Child Development Scheme, run by the department of social welfare, are aiming to change this. The health department has also launched micronutrient programs that include Vitamin A capsules and iron supplements.

Severe acute malnutrition is a stark reality in Bihar #India. More than 50% of children under 35 months r underweight pic.twitter.com/h1LPBjIVF6

Launched on October 11, 2014, by the Department of Social Welfare's former chief minister, Jitan Ram Manjhi, the government of Bihar initiated a campaign called “Bal Kuposhan Mukta Bihar,” which aims to reduce child malnutrition to below 30 percent among children under three by the end of 2017. The program uses social media and street plays to convey its messages about malnutrition. It even practices periodic household visits by service providers, such as Anganwadi workers and staff from the Accredited Social Health Activists, who talk to mothers about issues related to malnutrition.

Chhattisgarh, Rajasthan, and Bihar have been battling malnutrition for decades now. While new official data show improvement and testify that multiple programs seem to be working, there remains much to do.