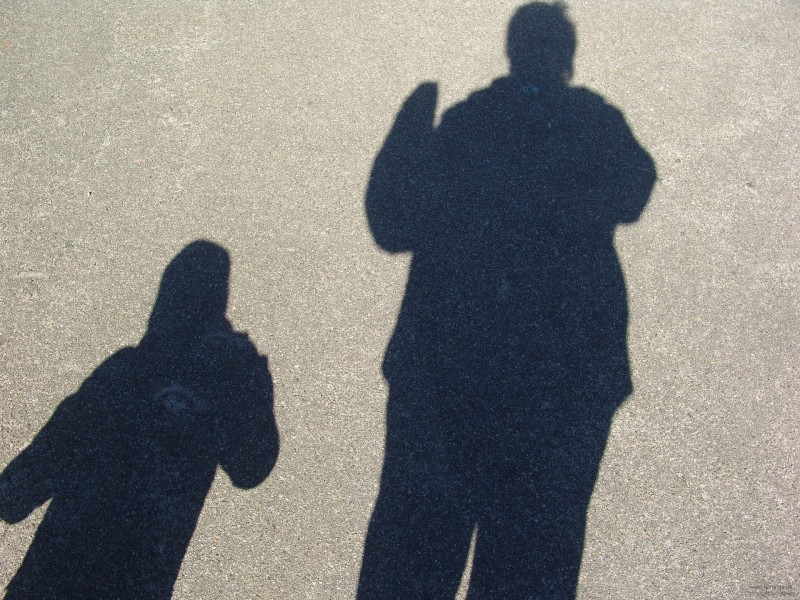 Shadow of a mother and child. Torange.us. Licensed to re-use.

For the second time in the space of a few months a horrible incident involving a mother of three attempting to drown herself and her children has shaken Tajik society to its core. In both cases the young mothers were rescued, while their children died.

On September 21, a few days before the major Muslim holiday Eid al-Adha, a 23-year-old woman called Salomat burned her house to the ground, and took her three children to the Vakhsh River nearby.

Salomat was later taken out of the water alive by residents of her village, but her son Alisher, 4, and daughters Sadbarg, 2, and Sumaya, six months, could not be revived.

This is the second such heartbreaking story in recent times.

Three months earlier, another women called Parvina took her three children from the village where they lived to the capital city of Dushanbe.

After a short walk in the local park Parvina took them to the banks of the main river running through Dushanbe and jumped into its waters with them. While Parvina was rescued, her son Ziyovuddin, 7, and five and six-year-old daughters Omina and Mahina drowned to death.

In both cases, forums, comment sections on news websites, and social media were filled with condemnation of the mothers’ actions:

Fool, why give birth?

This woman is guilty 100%, she killed three children. Are other Tajik women in villages free of problems? You should thank God and live your life. Women should bear responsibility for suicide, divorce, and everything else.

This kind of killer should be punished severely. How can a mother kill her own children? If you want to kill yourself, why throw the kids into the river as well? Just throw yourself in. It means that she herself was not innocent, and the children witnessed something.

The women were labelled as beasts, non-humans and other degrading things by the chattering classes in a country where internet costs about $25 per month or two-thirds of the minimum wage. Both women were from families living below the poverty line, a status they share with more than a third of the population.

In the case of the September tragedy, the circumstances surrounding the event are still unclear. The woman from the July incident, Parvina, said she had lost her mind after her husband of 11 years told her he wanted to leave her for his first cousin.

Bucking the trend towards blanket abuse of the killers, some internet users saw the two incidents as deeply rooted in the excessive burden borne by women in the poorest country to emerge from the rubble of the Soviet Union.

This is not the first incident, nor is it even the tenth. It is time for parents and government to think that rather than teaching girls just to cook, clean, and be dependent on their husbands, they should educate them, give them jobs and help them. It is time to set up psychological centres. I am deeply sorry for the children, but the problem can not be left ignored any longer.

All this happens because there is no social protection for the population. There is an agency to carry out this function, but it is completely useless. There is no program to support families in need. Perhaps [Salomat] had after-birth stress and depression? A horrible story […] Why are people so fast to attack her with “why have kids” [and other insults]?

These statistics only tell part of the story, however.

Massive social stigma and judgement surrounds suicide and depression in Tajikistan and many cases go unreported, while state media prefers not to highlight such stories.

Perhaps the problem of suicide will begin to be discussed more openly due to an increase in the number of men now taking their own lives. With the cost of living forever increasing and the economy suffering dreadful rebound from the ruble crisis in Russia — over a million citizens from Tajikistan work there making it the world's most remittance-dependent economy — suicide is losing its gender-specific character.

Parvina, the woman rescued from the river in July, is currently in detention and faces a jail term of between 15 and 25 years. Women's rights NGOs in Tajikistan have hired a lawyer for Parvina and are building awareness around her psychological condition at the time the event happened in the hope of reducing her jail term.

These campaigners say that women such as her and Salomat were given their real punishment some time ago: the type of life where the thought of killing themselves and their own children might cross their minds.