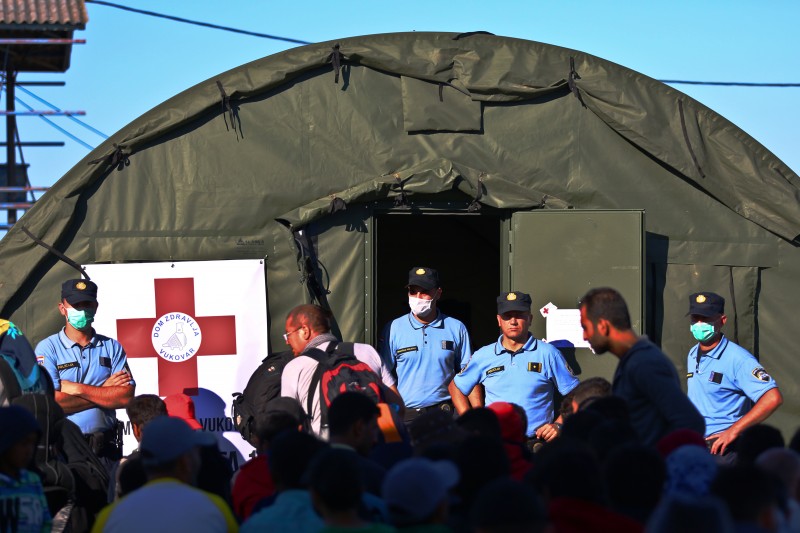 On Tuesday, September 22, minor clashes broke out between refugees and police at a transit camp in eastern Croatia. Officials have yet to explain the cause of the scuffle.

According to Sven Milekić, a reporter for Balkan Insight, 33 refugees fled the camp immediately after the violence and their current whereabouts are unknown. Milekić also cites the Croatian NGO Centre for Peace Studies, which says Croatian police used tear gas against the refugees, injuring at least two children, who were reportedly administered emergency care by Croatia's Red Cross.

In the meantime, the leaders of several Balkan states have opened discussions about the ongoing refugee crisis on several levels, while the relationship between Serbia and Croatia grows more strained. 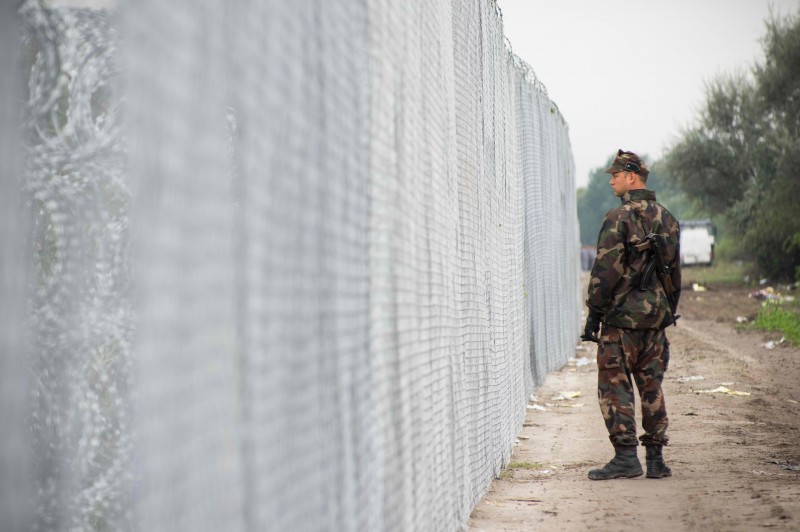 Hungarian military seen patrolling the border beside the newly built fences to control the flow of refugees crossing into Hungary. Photo by Geovien So, copyright Demotix.

Particularly unhelpful to easing these tensions is the Hungarian government's decision to erect a new wall and several fences along some of its borders, in an attempt to stem the flow of newcomers.

Croatian Prime Minister Zoran Milanović “warned” Serbian officials at a press conference on September 23 that “acting against Croatia would mean acting against the EU.” Milanović explained:

Croatia is an EU member. Serbia cannot, even if it wants, impose measures against Croatia as it has an agreement with the EU. Whatever Serbia does, or thinks to do, would be against the EU and I'm sure Serbia will not do that.

Milanović's statements seem to have irritated Serbian Foreign Minister Ivica Dačić, who responded by saying that Croatia “has not learned lessons from the problems, so far,” claiming that Milanović “continues to provoke Serbia with his statements.”

Serbian Prime Minister Aleksandar Vučić also called Croatia's decision to close its borders with Serbia temporarily a “brutal violation of the SAA that Serbia signed with the EU, that is absolutely unilateral.”

Some analysts and members of the international community are beginning to argue that the European Union is exaggerating the crisis presented by the influx of refugees from the Middle East. Critics say the EU is failing to involve non-EU countries that have a stake in the matter in the plans and resolutions made to handle the crisis, perhaps adding fuel to the already troubled Balkan region.

Analyst and professor of Southeast European Studies at the University of Graz Florian Bieber wrote a piece for Balkan Insight, where he describes the European Union's handling of the crisis from a Balkan perspective:

The damage caused by governments in their response to refugees has been tremendous. Within weeks, borders across the region have been come more tightly controlled and closed than they have been for over a decade. […]

The response of Balkan countries along the transit route has reflected the conflicting signals coming from Germany and other core EU states, which have oscillated between welcome and rejection.

The divergent responses by these governments has put pressure on bilateral relations, in particular between Hungary and its two southern neighbors, but also between Serbia and Croatia and Slovenia.

Fredrik Wesslau, another expert on European foreign policy and the director of the Wider Europe Program for the European Council on Foreign Relations, called attention to these issues in a piece published just two days before the conflicting comments from Serbian and Croatian officials. Wesslau wrote:

Between 2,500 and 3,000 refugees are estimated to be entering Macedonia and Serbia every day. As the total number of refugees in the Balkans increases, more countries are fortifying their borders. There is a domino effect at play of borders being closed and fences being erected. This is causing further tensions among the states in the region and leading to nasty quarrels among EU member states.

Freelance journalist Jorgen Samso, who spent some time in the Balkans just prior to the explosion of the current refugee crisis, coined a term that might best capture what refugees traveling the “Balkan route” are now experiencing: the “Balkan Border Shuffle.” This new dance craze, as it were, moves from border to border, with no way back. Samso describes for Politico the added confusion that already desperate refugees now confront:

The confusion has trickled down to the refugees making their way north to destinations like Germany. Even with smartphones with access to news, social media groups and online maps the refugees were unable to keep up.

Disagreements between the leaders of the European Union are growing more apparent by the day. As Fredrik Wesslau notes, things are bound to get much worse before they get better and both EU and non-EU countries affected by the huge influx of refugees in Europe are looking to the EU for solutions. At this point, recent decisions by EU leaders seem to be more successful at rekindling old animosities than resolving the current crisis.