‘We Are Here To Support You': A Dutch Welcome for Refugees 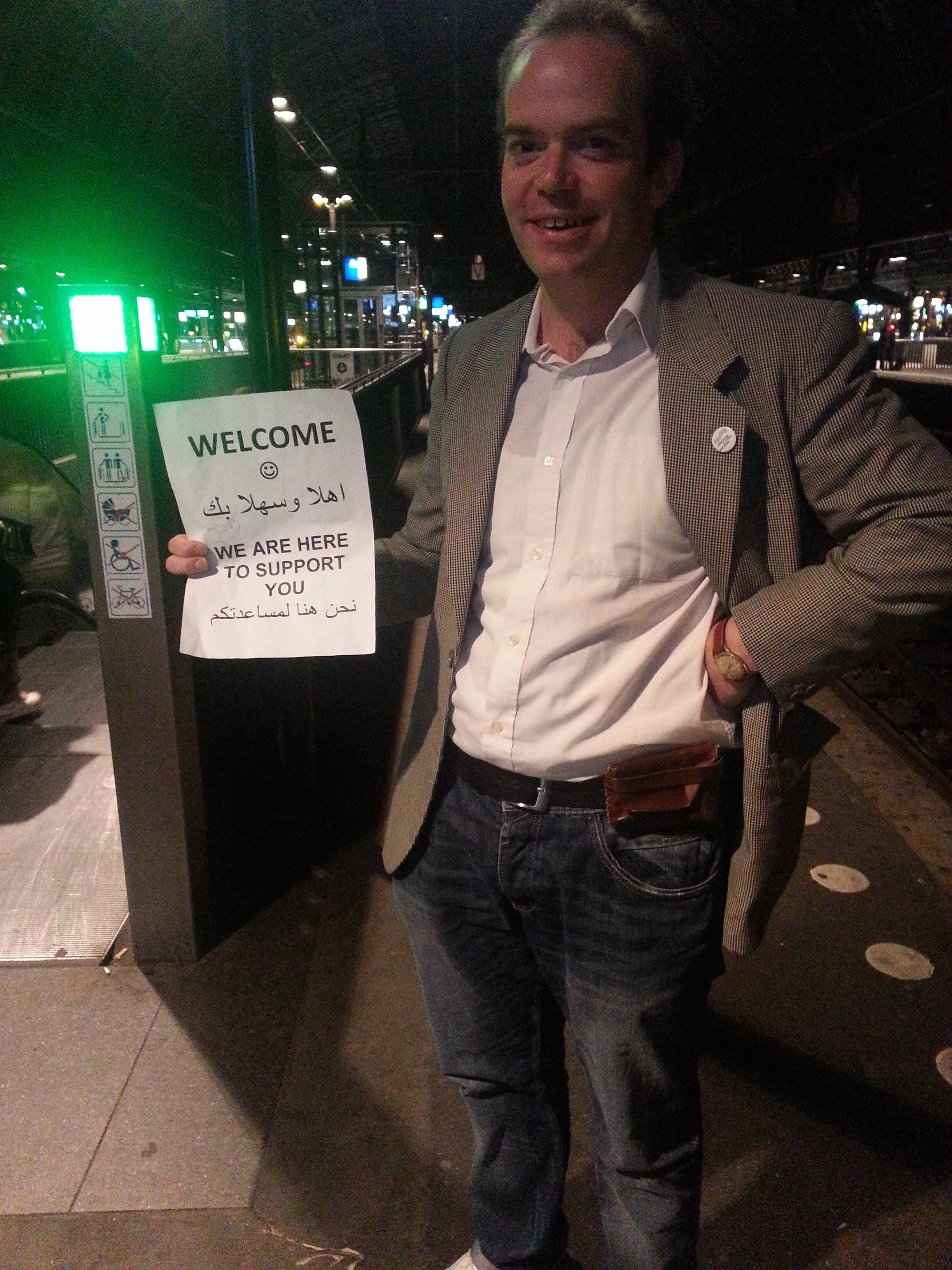 “Welcome. We Are Here to Support You.” A Dutch volunteer welcomes refugees on the platform at Amsterdam Central station. PHOTO: Faten Bushehri

On disembarking from my train from Paris at Amsterdam Central Station at around 10pm, I notice a man on the platform holding up a sign that reads: “Welcome. We are here to support you”.

I stop and tell him I’d heard they needed Arabic speakers to help with interpretation for refugees from the Middle East. The man’s face lights up. He walks me to a corner of the station where food, drinks, clothes, toys and other basic needs are neatly organized, awaiting the arrival of the refugee.

I‘ve been living in Amsterdam for the past two months, and lately talk about refugees possibly arriving in the city has been on the rise. Anticipating that the tide would eventually spill over to the Netherlands, a group of volunteers has banded together to help refugees with their transition and move to the camps.

The group at Central Station has a schedule of arrival times, focusing on trains coming from France, Germany and Belgium that have a strong likelihood of having refugees on board.

My task is simple: greet them, chat with them, ask if they need food, water or clothes, cheer up the kids, explain what will happen next. I focus on the things I need to say and the information I shouldn't forget. What I didn’t anticipate are the stories the refugees would tell me.

One after another they come, with big smiles on their faces of delight and relief that they’ve finally arrived, talking over each other to relate how they’d boarded the “death boat” in Turkey to get to Greece and then to the Netherlands.

Khalid, a man in his late 30s, tells me the inflatable boat he travelled on had 49 people on board, including women and children. As the vessel was overcrowded and not equipped to carry that much weight, they all had to throw their bags and belongings overboard to save their own lives. They disembarked at the Greek port of Mytilene soaking wet and shivering as Greek government officials looked on. Khalid has special praise for some Dutch tourists who quickly approached them and offered help. He remembers a woman wrapping him, cold and dripping wet, in a warm blanket. 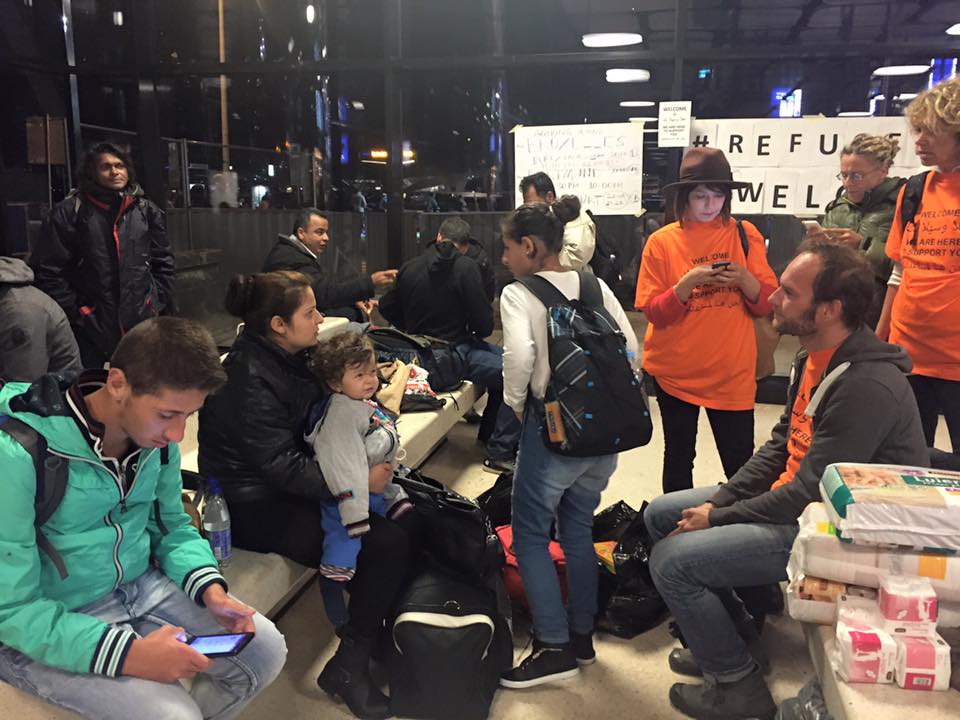 “We were becoming discouraged on the boat,” Khalid tells me. “But we drew motivation from each other. The men yelled, “Come on, we can do this! We have women and children on board!” And that's how we kept going.”

Upon arrival at Mytilene Khalid said they had to walk over 50 kilometers, from the north of the island to the south. He points to a friend he met on the boat whom he says was sick for days after being on the water for that long.

A Syrian woman interrupts to say that their boat had in fact exploded because of the weight. “When I remember the journey we had to take to get here, my eyes tear up,” she says. She and her fellow passengers had to swim the last few meters to the shore. She, her three little boys and her husband had fled from Al Raqqa, which is now under the complete control of ISIS.

Another woman tells what they paid for a trip on the boat: 1,400 euros per person. Another family paid 4,000, which they had to borrow from people they knew. “You paid 4,000 euros to possibly die?” I said to one of them. “We are dead either way in Syria,” he said.

A man in his late 50s who goes by the name of Abu Shadi is eager to connect to the wifi to call his children. His daughter lives in Breda, an hour and a half south of Amsterdam. His son lives in Sweden. Once settled, Abu Shadi looks at me with a broken smile. “My family is all over the place in different countries,” he says. As he looks at a photo of a young man in his early 20s on the screen of his phone, tears start pouring down his cheeks. “My son Feras has been missing for over a year now. Bashar Al Assad's forces kidnapped him. I don't even know whether he's dead or alive.”

As I try to empathize with Abu Shadi's unimaginable pain and grief, I'm called to report to the ambulance parked outside, in order to help mediate between a Dutch doctor, and a 23-year old man, also named Feras, who has been complaining of an increasingly severe headache accompanied by a cough and irritating rash. Having spent weeks sleeping in on the floor in various camps, the rash has spread all over his body. It's the first time I've seen the inside of an ambulance.

I meet two Iraqi men from the city of Mosul who were captured by ISIS but managed to escape and flee the country. One, a former general, was held by ISIS for 17 days. They broke his right shoulder because he had a tattoo (taboo in Islam) of the map of Iraq, blindfolded him and tied him to a fan. The second man, Ahmed, one of 23 people captured by ISIS, says they put a knife to his throat. “19 people were killed in front of us, and I was one of the survivors,” Ahmed tells me. “I don’t know how I got out of it.” 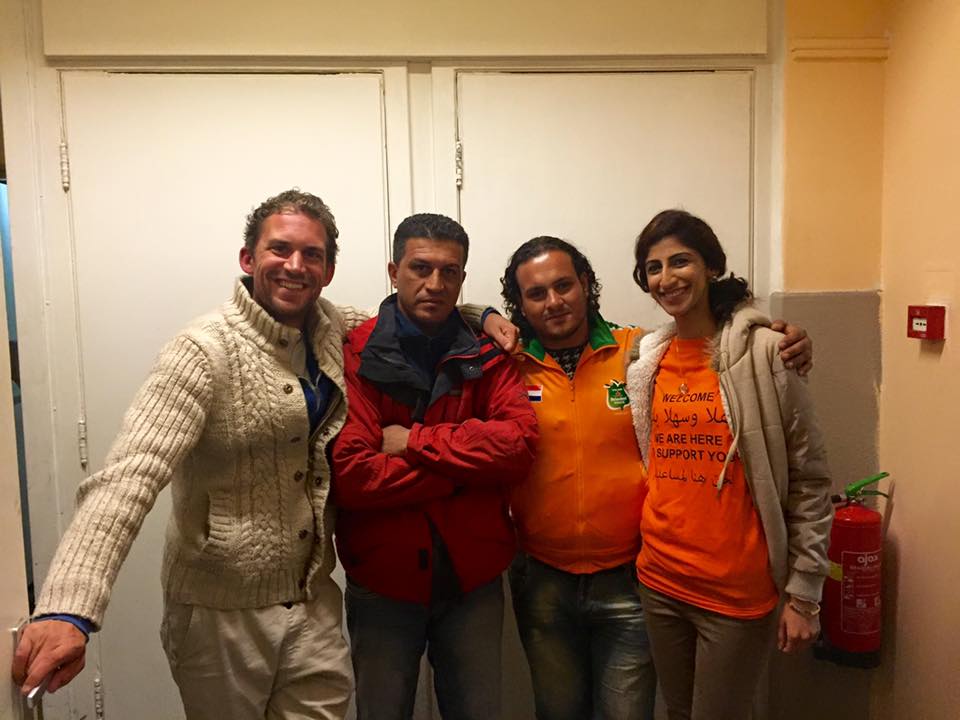 Two Iraqi refugees who managed to escape after being captured by ISIS are flanked by Joost, a Dutch volunteer (L) and the author (R). PHOTO: Faten Bushehri.

As I address these people in Arabic, they’re excited to hear a familiar language and ask where I am from. I’m slightly ashamed to admit I’m from Bahrain, a Gulf country that contributed to the war in Syria. The Gulf nations offered nothing, and added insult to injury by shirking their responsibility to host refugees in their oil-rich countries.

And here I am now, a privileged resident of the Netherlands, studying at a top university to earn my fully funded Masters. My biggest worries are about submitting my next exam, while they’re huddled together in a corner of Central station, wondering what the future has in store.

Mohammed tells me he left his wife and child back in Syria with nothing but a promise to make it to Europe and have them join him once he settles. “We don't want to be a burden on society,” he says. “I am a nurse. I want to learn Dutch and start working.” They’re humbled that we want to help and refuse to take more than the minimum that would get them through the night.

As the refugees in Central Station take in the fact that they’ve arrived in Amsterdam, the kids skip around among us volunteers, enjoying their new toys. Soon, they’ll all board a Red Cross bus that will take them to a temporary camp, and the start of some sort of new life.

For more information about RefugeesWelcome Amsterdam, visit their Facebook page.