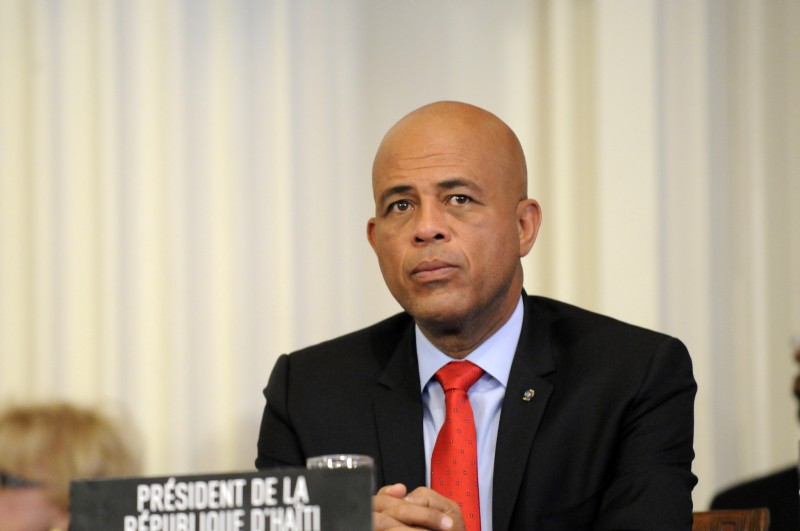 The struggle for equal rights when it comes to gender is an ongoing one, in some parts of the world perhaps more than others. The Caribbean-focused feminist blog Code Red, which regularly calls out gender-related injustices in the region, is appalled at the abuses West Indian women must bear, suggesting that much of the misogyny appears to be culturally accepted.

Much of the blog's focus was on an incident in late July, involving Haitian President Michel Martelly. On the campaign trail in Miragoane, a woman in the crowd openly criticised Martelly and his government, asking what they intended to do about the lack of electricity service in her area. The president responded, not by addressing the issue at hand, but rather, by telling the woman to “find a man and go into the bushes” — effectively dismissing her concerns and suggesting that her problems would be solved by having sex.

Code Red's assessment of Martelly's remark was far more severe than it being a sexist gaffe:

Michel Martelly threatened a woman with sexual violence because she sought to hold him accountable to the people.

The blog also quoted directly from a report about the incident that accuses Martelly of much worse behaviour — there is, however, no evidence to support these claims, although this Miami Herald report confirms that the president's remarks were recorded and played on Haitian radio.

‘Fool who does not respect women’

Meanwhile, public outcry over the incident in Miragoane was swift — people were protesting, both on the ground and in the blogosphere — and several female members of Martelly's government resigned.

There was even an online petition against Martelly's sexist comments, and on Twitter, netizens discussed Martelly's misogynistic response to the woman's criticism:

Since the incident in #Miragoâne I have a duty to not listen to #martelly, that fool who does not respect what women have to say

One Twitter user thought Martelly's display of sexism was simply an extension of the allegedly corrupt modus operandi of his government:

#Haiti #Martelly is not only corrupt, but he's a sexist pig as well. #ThankUHillary! http://t.co/4cXophjpEV

Others were not surprised at his reaction:

#martelly, pushed & pushed the limit to see how far he can get & he got far… He was never able to stand others who stood up to him!

To some, however, that was no excuse for the musician-turned-politician who once went by the name Sweet Micky:

fuck yeah Sweet Micky can talk shit abt whatever the fuck. but President Michel Martelly better get his shit settled as MY PRESIDENT.

Of course, there were some Martelly supporters…

While Marie Lucie of #Vision2000 appeared to have made excuses 4 #Martelly‘s anti-women comments, @RTVCHAITI having field day w/ intl focus.

…but most feminist activists and women's groups stood solidly behind their own:

Women's group says awaiting reaction from @UN and @EU_Commission on #Martelly‘s comments. “They have a right to say something.” #vision2000

Another Haitian government official has since resigned:

The long road ahead for Caribbean feminism

Meanwhile, the Code Red post went on to cite other regional instances of threats against women and homosexuals — Barbadian schoolboys “chanting an original pro-rape song: Tek dickey and roll”; the fallout over Caleb Orozco's fight to end anti-gay laws in Belize; and a public threat by a government official against a female activist in Guyana — making the point that “misogyny and anti-gay violence are rooted in hetero/sexism”:

Rape is a footnote. Schoolboys can delight in it and Presidents can threaten women citizens with it.

Feminist activists are told that we need to meet heterosexual men where they are, that we need to allow men their misogyny (as if we have a choice in the matter?) as gender equality is a process that cannot be preempted by our claims to full humanity. We need to be patient and quiet and good. Misogyny is the fabric that our society is made of. Best to lean in rather than undo. Better to workshop than unravel de damn ting!

The post ended on a despondent note, even as the blog — and outspoken women across the Caribbean — continue to battle gender inequity, day by day:

Some days Caribbean queer feminist brilliance beats so boldly it drowns out the constant and multi-directional message that women and girls don’t matter. And the rest of the time? That schoolboys’-chant-President’s-rant stays in your head.