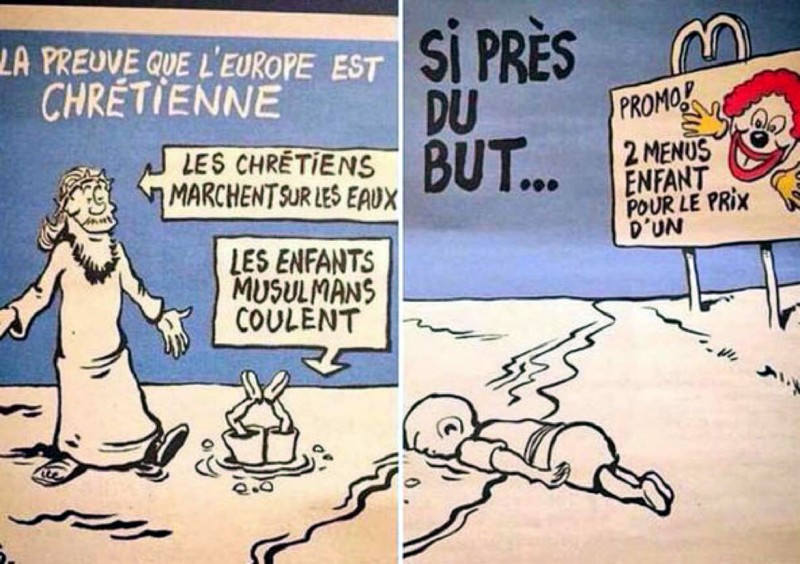 Once again, the French satire magazine Charlie Hebdo has triggered an international controversy. Its publication of cartoons depicting Alan Kurdi in its September 2 issue left readers wondering if it was mocking the child's death, the European responses to the migrant crisis, or neither. The magazine has managed to ignite a new debate about freedom of speech.

Alan Kurdi, the 3-year-old Syrian toddler whose body washed up recently on a Turkish beach, has become a symbol of the Mediterranean crisis. He had boarded a migrant boat with his brother and mother and 20 other refugees that was headed to the Greek island of Kos. But the boat sank, claiming Alan's life and another 11 others, including that of his own mother and brother.

#CharlieHebdo You went too far, disappointing. Do not confuse freedom of speech with hate speech. #Aylan pic.twitter.com/ilbE4bsYMy

The image on the left shows a toddler wearing the exact same clothes Alan had on when his body was found, and a McDonald's billboard that offers two children's meal for the price of one. This could be interpreted as referring to Alan and his brother.

The caption reads “So close to making it…”

On the right is a cartoon penned by a cartoonist who survived the gun attack on Charlie Hebdo in January 2015. He drew a Jesus-like figure standing next to the toddler, laying face down with a caption which reads: “Proof that Europe is Christian.”

An account that goes by “A Common Lawyer” tweeted another cartoon showing a toddler representing Alan in two drawings of swimming champions, reading, “Can you guess who's not the swimming champion?”

Here's another #CharlieHebdo #aylan cartoon. ‘Which of these three swimmers hasn't been a champion swimmer?” pic.twitter.com/k36UwCyaWg

Charlie Hebdo was the victim of an attack in early January of 2015 that left 12 people dead, including a top editor of the magazine. In 2006, the magazine republished the Danish artist's cartoons of the Prophet Mohammed, which was deemed by many in the Muslim world to be insulting to Islam, while many in the West viewed the act as a form of free expression.

The Alan Kurdi cartoons yet again leave the public opinion divided between criticizing the magazine's apparent tasteless sense of humor and acknowledging the right to free press and speech.

Disgusting…Is that their freedom of speech? Mocking the dead child? They want to hurt feelings of people…Brainless #charliehebdo #aylan

Charlie Hebdo managed to mock #Aylan Kurdi, the boy who drowned, in the name of satire. Shame on You #CharlieHebdo pic.twitter.com/AUaFjZkX7w

Some see the magazine's approach to satire on a global issue like the migrant crisis as irresponsible journalism:

So #CharlieHebdo has now plagued the western media by mocking #Aylan. Its time we realisd they represnt nothng but irresponsible journalism.

So #CharlieHebdo has now plagued the western media by mocking #Aylan. Its time we realisd they represnt nothng but irresponsible journalism.

These cartoons have been double-edged, as people take offense to the fact that a dead toddler is featured in them, while others see it from a different perspective, suggesting that the whole point of these cartoons is to mock the West's response to the crisis, and not Alan.

#CharlieHebdo isn't mocking #Aylan but the capitalistic countries that unfortunately don't care for the pain of the refugees. How I see it.

Isn't the #CharlieHebdo cartoon on #Aylan a take on European's, mocking them, rather..?

Several papers including The New York Times, The New Yorker, Bloomberg View, and many others have published articles explaining the other side of the coin. The New York Times, for instance, argues that the cartoons attack Europe's “hypocritical response to the [refugee] crisis” first and foremost.

A website called Understanding Charlie Hebdo breaks down the meanings behind the magazine's cartoons in general, presenting examples of different cartoons that have been published in the past. It says:

Charlie Hebdo employs its rather brutal satire against dogma, hypocrisy, and hysteria, regardless of its source. Satire works by toying with different levels of interpretation (irony)—a fundamentally subjective endeavor, which in the hands of Charlie Hebdo is sure to leave bitter aftertastes. Humor is not a requirement.

Despite the mainstream media's attempt to tone down the debate by clarifying Charlie Hebdo's agenda and hidden message, some are still unconvinced, like the French-Algerian journalist Nabila Ramdani:

My piece on the magazine's latest cartoons: Yes, I ‘get’ #CharlieHebdo ‘joke’ about #Aylan. And it’s repulsive. http://t.co/SuQqTmEAYg

Ramdani wrote a column for Al Arabiya, where she said:

What is certain is that there is nothing humorous about dead children, least of all ones caught up in a global refugee crisis. This view is not a minority one, not a radical one, and not an ignorant one offered by censorious killjoys. Like Mr Herbert, a highly educated barrister, I “get” exactly what Charlie Hebdo is trying to do, and what the magazine represents. And like millions around the world I find it all utterly repulsive.