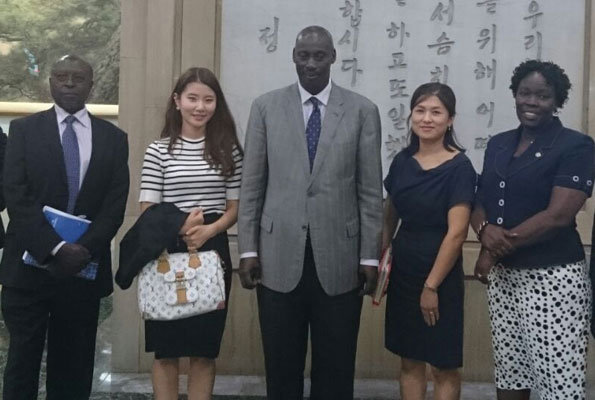 One of the last pictures of Gen. Aronda taken in S. Korea. (Internet Photo)

On Saturday, 12 September, 2015 the country woke up to shocking news of the sudden death of Ugandan Internal Affairs Minister and former Chief Of Defence Forces, General Aronda Nyakairima. General Aronda died in Dubai while in transit from a visit to South Korea.

After the news broke out, many people took to social media to send messages expressing their condolences. Some social media users, however, started floating conspiracy theories about his death. During Aronda's state funeral on September 19, 2015, Minister of State for Internal Affairs, James Baba, warned social media users against misusing social networks to spread potentially false and damaging information. The Minister also said that the government intends to come up with a legal framework to crack down on social media users spreading malicious information.

A postmortem report released on 17 September, 2015 stated that the General had died of heart failure. During the requeim service for the late official, however, his widow, Mrs. Lindah Aronda said:

This heart problem you are talking about, OK it may have been there but we [the family] have never seen it.

My [two] children are are my witnesses. He was full of strength…For 19 years he has never failed to get out of bed or fall sick.

However, President Museveni said he managed to obtain medical reports that indicated that Aronda had had “mild hypertension” for many years.

She has every reason to doubt because even before the postmortem report, gov't sources had it that he died of heart failure;where did they get that information before the said doctors were sent in to investigate his death? These silent killin ll be put to books oneday.

Another Facebook user, Namanya Robert wondered how Ugandans would ever know the truth of the matter:

Someone to die from heart failure should have had episodes in the previous history because heart failure may progress gradually, how should we know the truth

A colleague and best friend to the late General, Brig. Kasirye Gwanga, said that the general did not die of heart attack but rather that someone had killed him. In a video published online, he promised to come after those that had done it.

In 2013, when General Aronda Nyakairima was appointed the Minister of Internal Affairs, one of his main tasks was to curb corruption that was deeply rooted into the immigration department and passport office. During his acceptance speech, he promised to work day and night to make Uganda a better country.

Aronda on his 1st day in office as Minister said ‘Ours will be about service delivery’. Indeed it was… Fare thee well General. #RIPAronda

Commenting on the New Vision website, Wamala Isaac, also felt there was something fishy about Aronda's death:

sorry for the loss we have encountered bt there must something behind his death, all in all words alone are not enough to explain we wish you were still alive

Possibly the fittest man (physically) in the cabinet, to die of heart attack? It is puzzling. Big loss of the only OB of Kitgum High School in cabinet to pass on so young!

I really ask what is in the lineage of chiefs of defense forces? from kazini to aronda all dying mysteriously. RIP and may God use others to carry on your best plans for the country

Jims Marie asked the government to run a thorough investigation before the final conclusions about the cause of Aronda's death:

Something is terribly wrong …. ! There needs to be a thorough investigation and autopsy done by the UG gov't. What did he eat in the plane or before leaving S.Korea? Who did he meet the last 24 hrs before he left S.Korea..? Did he meet any foreign officials, and who where they, and from which country(ies)?….The whole thing looks suspicious..!! Serious investigations are needed to get to the bottom of what really happened? Heart attacks can be induced through all kinds of chemicals or medications. Was he travelling on official duty..? who was he travelling with from his ministry or gov't? Given his profile, background and national responsibilities with regards to national security and intelligence matters, the gov't needs to questions and thoroughly investigate the circumstances surrounding his death…! Something seems very wrong here..!

General Aronda Nyakairima was also representing the Ugandan army in Parliament, which often put him at loggerheads with some of the other politicians. Uganda's laws do not allow active army officers to occupy political posts, such as that of a minister. It is not clear why he was allowed to represent the Ugandan army in Parliament while he was already a cabinet minister.

Uganda's main opposition leader, Kiiza Besigye, has called for a full investigation into Aronda's death. Ugandan Members of Parliament, however, remain divided over the need to investigate his death.