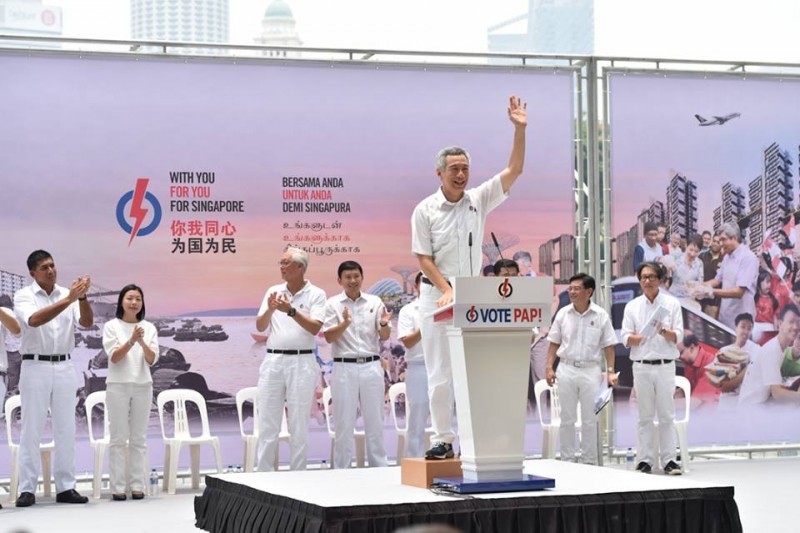 Singapore's Prime Minister Lee Hsien Loong addresses a crowd in a campaign rally. The slogan of the ruling party is “With you, for you, and for Singapore.” Photo from the Facebook page of People's Action Party.

Singapore's ruling People's Action Party (PAP) dominated the general election with almost 70 percent of the vote, about a 10-point improvement on the previous election in 2011 that was meant to have signaled a transition away from one-party rule in the city-state.

The 2015 general election was held a few months after the passing of the country's first prime minister, Lee Kuan Yew, and was announced right after the massive Golden Jubilee celebration. The campaign period lasted for only 10 days. Apart from the incumbent PAP, eight other political parties of various sizes and quality entered the fray. It was the first time since 1963 that every single seat in Parliament was contested.

But many Singaporeans were stunned when the ruling party ended up winning 69.86 percent of the vote as every constituency across the island saw swings away from the opposition. The Workers’ Party lost one of its seven seats in parliament, while clinging on to its five-seat Aljunied Group Representation Constituency (GRC) by a winning margin of under one percent.

Some Singaporean bloggers and analysts dissected the election results to gain a better understanding of why the PAP won more votes despite the expectation that it would lose a significant number of seats.

With the new results made public, blogger Alex Au re-evaluated the way in which the previous general election could be seen:

The 2011 results, including the by-election results following that general election, now have to be read as purely a protest vote. People were angry at a few things, and once the government took the sting out of these key issues with a number of policy tweaks, the electorate reverted to form.

Ghui, a commentator on The Online Citizen, speculated that the swing towards the PAP came from a fear of a “freak election”—one in which a sudden surge of support for the opposition would lead to the PAP losing the power to form a government, leaving the task to an unstable coalition of opposition parties:

The PAP… played up the threat of the opposition ruining Singapore, feeding fears that the entire governmental system would collapse, inexperienced politicians would charge into Parliament and the country would be run to the ground.

People I have spoken to unanimously agreed that they wanted more opposition MPs in Parliament. Most were also in agreement that seven elected MPs were insufficient to be an effective check in Parliament. Yet, many were also fearful that if everyone voted that way, the PAP may end up losing power.

The fact that the official media limits the publication and portrayal of political parties is widely known. But what is not so common knowledge is how they do so. Take, for instance, my experience with a local broadcaster to get our party’s script cleared for TV during this general election. As the person who submitted the script, I was required to stay behind for six hours until I received clearance from their legal department. On that occasion, their representative highlighted four short sentences in our script that contained a few “potentially defamatory” names and words. I sought clarification for why these words were defamatory, but the representative merely said they do not want to be liable for the statements made by the party and wanted us to relook the content.

…there are severe barriers to entry to effective political competition. Extensively redrawn political districts, minister-fortified GRCs, a govt dominated mainstream media, ridiculously short campaigning periods, non independent civil service organizations (to name a few) mean the playing field is extremely unequal to begin with and that better MPs are deterred from offering their services as opposition members while less able or altruistic ones my be incentivized to join the ruling party. Just look around. Meritocracy in politics is being eroded, which is not good for governance long term.