Taiwan Fishing Heritage: Fish and Fire Dance in the Sea 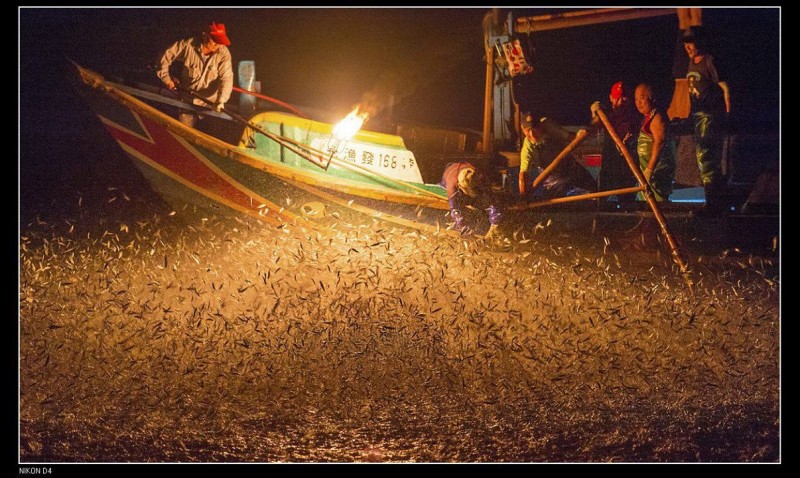 The whole fishing team works together to catch the fish. Photo by Ming-Chih Chang.

Pōng-hué-á (蹦火仔, pōng is for the sound of fire) or “jolting fire” (sometimes also translated as “sulfuric fire”) is a fishing technique once widely used by the aboriginal people in Taiwan. In the night, indigenous fishermen used to light a fire with bamboo or wood in their boats to attract the swimming fish nearer to the vessels.

Later this aboriginal fishing technique was reinvented, and fishermen began using kerosene to light the fire. During Japanese rule over Taiwan, fisherman switched to using acetylene gas for stoking the flames. The gas was generated from the chemical effect of putting the so-called “sulfuric stone” (calcium carbide) into water.

The acetylene gas technique has been preserved to this day in the Jinshan Harbor on the northern coast of Taiwan. The harbor was used to transport sulfur harvested in the nearby mountains since the period of Spanish Rule (between 1626-1642).

Jolting fire fishing has been very popular in the Jinshan Harbor since the Qing Dynasty and a must-see attraction during the summer time when massive shoals of anchovies and sardines swim off the northern coast of Taiwan. Yet the traditional fishing technique is waning, with only four fishing vessels still using this method.

Last month, on August 31, the fishing technique using acetylene gas was registered as a cultural heritage activity under the Department of Cultural Affairs of the New Taipei City Government.

Journalist Huei-Jen Lin from News Market, an independent news site, explained why this technique is eco-friendly:

Nowadays most fishing boats use extremely bright lighting, which makes the fish eyeballs explode. This kind of technique is criticized as not eco-friendly. On the other hand, the fishing technique such as jolting fire is only applied in a small area for a short time, so it is considered to be eco-friendly.

The Jinshan Culture and History Studio has studied the jolting fire technique for years, and helps organize tours allowing tourists to experience the fishing technique and understand its advantages:

The fishermen only need one boat to apply this technique. […] It is very flexible.

How exactly do fishermen apply the technique to catch the fish? Journalist Huei-Jen Lin from News Market took some photos of the action and described the procedure in details in her report.

The jolting fire boats usually leave the harbor at 6pm. After they localize the fish, they come back and wait until it turns dark. 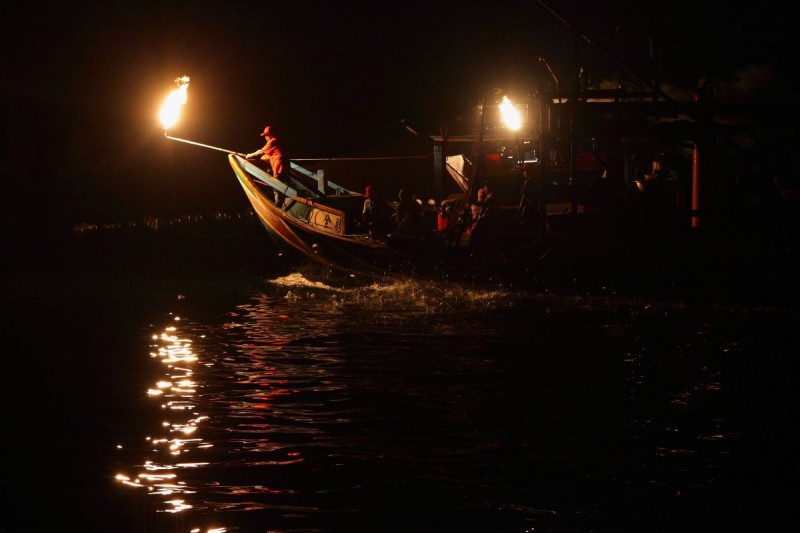 The fire chief holds the fire to attract the fish. Photo from Ray J. Lee.

The fire chief directs the fishing team, which usually includes the following members (see photo at the top of the post):

Fishermen called “ocean poles” need to assemble a five-member netting team to set the net and collect it. The job of these fishermen, standing from the head to the tail of the boat, is to drag the net, pull the poles, control the poles (i.e., the netting guy), step the poles, and drag the poles. […] There is a staff on the boat called carbide fitter, who is responsible to replace sulfur rock [calcium carbide] and control the volume of water to generating acetylene gas. […] Another important person is the boat driver. An experienced boat driver would observe the tide and oceanic flow to help the fire chief find the fish. When the fish moves close, the boat driver needs to stop or turn around swiftly so the netting guy can find the perfect angle to set the net.

When the fishing boat moves close to the fish, all the staff on the boat are prepared for the catch:

The fisherman who is responsible for pulling the poles raises the left pole to set the net on the edge of the boat. All the staff hold their breath and wait for the fire chief to turn the fire and direct the fish swarm to the net set at the left tail side of the boat.
Once the fire chief gives the order, saying “Put it down,” the netting team push the net into the sea. After the fish come into the net, the netting team presses the poles and uses the lever principle to bring the net up. The lively sardines are dragged past the fishermen’s feet and thrown directly into the trunk. Sometimes there are too many fish [in the net], and three or four fishermen need to work together to bring up the net.
The whole process is finished within 10 seconds or so. Everyone on the boat has their own responsibility and they need to work together. When there are a lot of fish, the fire chief may decide to set the jolting fire up four or five times in a row, and the netting team need to set the net, pull the net, and raise the net again and again, repeating the cycle many times. When there is a big harvest, the fishing teams might need to repeat this process hundreds of times in one night.
The technique of jolting fire emphasizes team work. The camaraderie between the boat driver and the fire chief and between the fire chief and the netting team is very important.

Watch the YouTube video made by News Market to see how the jolting fire teams work together to catch the fish.