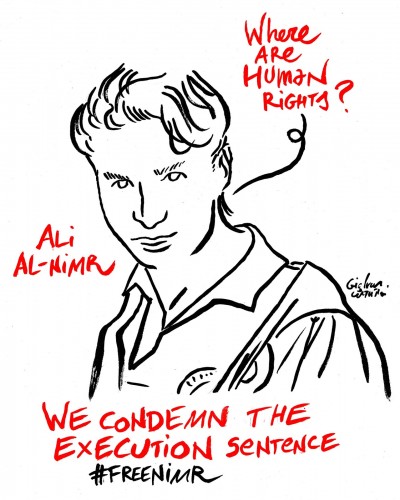 A Saudi court has endorsed the death sentence of 21-year-old Ali al-Nimr for “participating in demonstrations against the government, attacking the security forces, possessing a machine-gun and armed robbery,” the daily Okaz reported on September 14.

When al-Nimr was initially arrested on February 14, 2012, he was 17 years old. He was taken to the General Directorate of Investigations (GDI) prison in Dammam, in the Eastern Province. Al-Nimr's case was then transferred to the Ministry of Interior, according to his father, political activist Mohammed al-Nimr. The Specialized Criminal Court in Jeddah initially sentenced al-Nimr to death on May 27. According to news reports, al-Nimr will first be beheaded, and then have “his body strapped to a cross to rot.”

“The court seems to have based its decision on signed ‘confessions’ which Ali al-Nimr claims were extracted under torture and other ill-treatment, and has refused to look into this allegation,” Amnesty International said in a report released in 2014.

The accused's father criticized the media coverage of the trial.

The daily news outlet Okaz mentioned in its report that Ali is the nephew of Sheikh Nimr al-Nimr, a Saudi Shiite cleric who has been detained since July 2012, who is also sentenced to the death penalty and had led protests in Qatif at the height of the Arab spring in 2011.

Mohammed al-Nimr, Ali’s father, has been actively tweeting about the details of the case, drawing attention to human rights issues and due process violations.

During #Ali_AlNimr investigation, the investigator wrote a scandalous statement & took Ali's thumb threatening to stamp with his fingerprint

Young men like #Ali_AlNimr should be in school & not in prison or in courts which lack minimum standards of due process. #Qatif #Saudi

Eman al-Hakeem, a Saudi lawyer, chided the actions of children's rights advocates in the case:

Child rights defenders know about Ali al-Nimr's case, but they chose to be silent because they are, first, sectarians, second, cowards.

I call on the Human Rights Commission to consider the procedures carried out against Ali al-Nimr from the moment he was arrested to the sentence and report it to the Royal Court.

The approval of Ali al-Nimr's death sentence is a dangerous phase by all standards: to kill a person who was arrested as a child and has not made the “most serious crimes” which led to death.

Fatima Kareem shared a video on Twitter showing al-Nimr arguing with police who were threatening to shoot at him. He was filming them as they were looking into his house:

In the video Ali said: I don't have anything, just my camera. You're looking at my house which is the reason why I'm recording.

al-Nimr's execution will be carried out as soon as the Saudi King ratifies the sentence.

According to Amnesty International “Saudi Arabia is one of the most prolific executioners in the world, putting more than 2,200 people to death between 1985 and 2015. Between January and the end of August 2015, it executed at least 130 people, almost half of them for offences that do not meet the threshold of ‘most serious crimes’ for which the death penalty can be imposed under international law.”