South Africa's President Blames the West for Surge in Refugees, So ‘They Must Address It’ 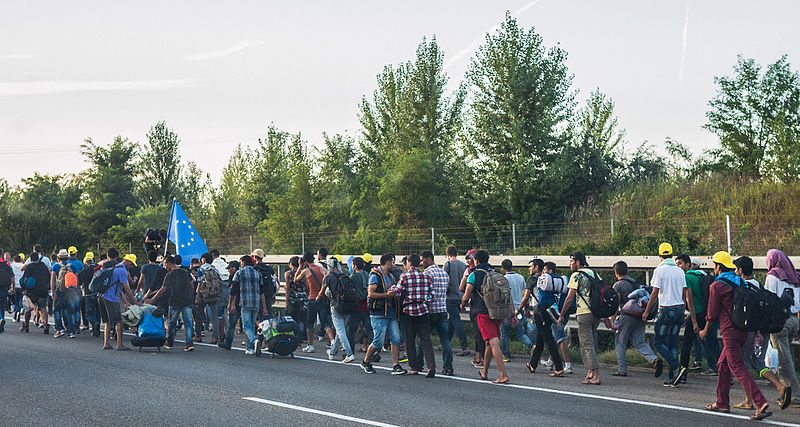 Refugees on Hungarian highway on their march towards the Austrian border. Photo released under Creative Commons by Joachim Seidler.

During his address to foreign diplomats in South Africa on Tuesday, September 15, 2015, he said that military action against Libya's late dictator Muammar Gadafi opened the floodgates of refugees.

“It is their responsibility. They caused it, they must address it,” Zuma said.

Watch Zuma addressing diplomats on the YouTube video below posted by ENCA News:

Zuma also called for the recognition of a Palestinian state based on the 1967 borders, warning that there can be no lasting peace in the region as long as Palestinians are denied right to a land of their own. On Syria, he said that there should be no military action to change the regime. He also called for a permanent member of the United Nations Security Council from the African continent, wondering how “a continent with more than one billion people” does not have a permanent member.

Noting that there was a “grain of truth” in Zuma’s speech, Peter Fabricius, a security consultant for the South Africa-based Institute for Security Studies, however, argued that his analysis was “narrow, deficient, accusatory and plain wrong”:

No doubt NATO’s intervention contributed to the toppling of Muammar Gaddafi and therefore to the power vacuum that has turned Libya into ungoverned space, allowing human traffickers, unfettered, to launch tens of thousands of migrants from its shores towards Europe.
And conversely, the rival Libyan militias have made a business of trafficking migrants in order to raise money to further their own interests. This is a key driving force in the sudden ‘surge’ of refugees coming through that route.

Yet it was not ‘all quiet’ and ‘normal’ before NATO intervened, as Zuma suggested. The people of Libya had already risen against their brutal leader. And if ‘things were normal’ why did South Africa, Gabon and Nigeria vote for UN Security Council Resolution 1973 of 2011, authorising the NATO military intervention?

Like the NATO countries, South Africa did so because it feared Gaddafi was about to carry out his threat to exterminate the rebellious residents of Benghazi. So South Africa may also be said to have made its small contribution to the European refugee crisis.

Also, the events in Libya hardly account for the whole mass of refugees now reaching Europe, as Zuma implied. Most of the refugees are not from Libya. Most, now, are from Syria and – as the speechwriters acknowledged – are fleeing the war there with its brutal foes on both sides. The EU has had little to do with that war. Nor with many of the other places from which migrants are flowing, such as Eritrea, although it is certainly true that some EU nations share responsibility for the chaos in Afghanistan and Iraq, two other major sources of migrants.

‘Standing up against Western tyranny’

Reacting to an article about the speech on This is Africa, Buh Mai supported the argument that the West must take responsibility:

Ngariwa Aba Stanley saw hope in African leaders such as Zuma, who are standing up to “Western tyranny”:

This however is a sight of hope that African Fathers to mother Africa like Jacob Zuma, [Zimbabwe President] Robert Mugabe, [Cameroon President] Paul Biya, [Equatorial Guinea President] Teodoro Obiang Nguema, [Kenya President] Uhuru Kenyatta and me, and the other few are now speaking and standing up against western tyranny. The west has been pulling off plugs in Africa for far too long directly and often times systematically. This has got to stop NOW!

While agreeing with Zuma’s analysis, Marcus A Mitchell, however, noted that South Africa signed the Resolution 1973, which authorised military action in Libya:

Speaking with a forked tongue. He contributed in killing Gadaffi by signing that resolution. Didn't he read before signing?

Commenting on Dispatch Live (there are not links for individual comments), Tron mocked Zuma:

I love the way Zuma stands up there and dictates to the rest of the world how to run their countries, while in the meantime, Zuma cannot run this country.
He is skating on thin ice by criticising some of these other countries.

“The western world, and the “imperialist” US in particular, came in for stinging criticism, while China’s leadership was lauded as the “guiding lodestar of our own struggle”.” Yet just yesterday the Minister of Health was turning to the U.S. to help South Africa with BCG vaccines for children to immunize them against TB. The [African National Congress, Zuma's party] is imploding, everyone has their own agenda due to lack of real leadership.

He points fingers at the imperial west but hops on a plane with his begging bowl in hand at the U.N summit. Not to mention the financial aid running into hundreds of billions given to S.A for development programs such as HIV/AIDS, our biggest killer.

It's time the west stops riding this wave of white guilt, handing out charity while getting mocked when they turn their backs. Africa needs to grow up.

Lawrence Dahl thought Zuma is making a terrible mistake for criticising the West:

His anti-“imperialist,” anti-US stance will probably ultimately cost us AGOA [a US legislation designed to assist the economies of sub-Saharan Africa and to improve economic relations between the United States and the region] money. He is making a terrible mistake, but then all clear-thinking people know that already.

Although Pierre Potgieter does not like Zuma, he thought his analysis was correct:

I don't like the man, but he is correct. France and Nato's attack on Gaddafi, removed the one stabilizing factor in that country. By Attacking Assad in Syria they are making the same mistake.

Finally, a piece of advice from Erik Grobbelaar:

As the “leader” of a pretty disfunctional outfit called SA, he should probably rather withhold comment and focus his energy locally ….