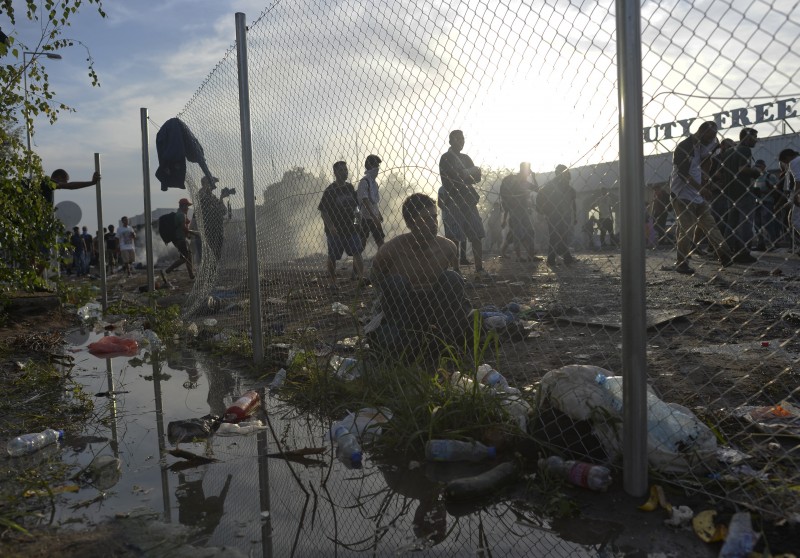 Horgoš, Serbia. 16 September 2015 — A scene from the “Horgos 2″ border crossing into Hungary, after the Hungarian police spread water on migrants. Hungarian riot police used tear gas and water cannons on migrants who tried to break through a razor wire fence and enter Hungary from the Serbian border in Horgos. Photo by Art Widak. Copyright Demotix

Hungary formally closed its border with Serbia just after midnight on September 15, sending special police forces, military units and humvees to guard its walled-off southern crossing against a steady stream of refugees trying to enter the European Union.

Authorities declared a state of emergency in two counties and announced the border would remain shut for at least the next 30 days. Drone footage of the Hungarian-Serbian border on the morning of September 15 shows a large group of refugees waiting at the border, with more arriving.

The following day, clashes between refugees and police left over 300 people injured, according to Serbian media, among them at least 30 children and minors. Police, who said the crowds threw stones and bottles at officers, used tear gas and water cannons against the refugees.

#Refugee #children hurt by tear gas used by Hungarian police are carried away from border crossing at Horgos, Serbia. pic.twitter.com/j7SZXRus1o

Mondo.rs portal reported that the clashes began when Hungarian police opened one of the several layers of protective fences, at which point the refugees, thinking that they would be let through into Hungary after all, began trying to pass the border in a large hoard.

Live-streamed video provided by Russian media outlet RT captured police throwing smoke bombs into the crowd by police and ambulances arriving to provide medical aid to the injured, as well as video footage of how the clashes between the refugees and police began.

Polish TV crew also hurt at #Roszke. Much of policing is about PR and self-fulfilling expectations. #Hungary losing. http://t.co/kB8rx0PsMA

The Independent Journalists’ Association of Serbia (IJAS) called on the Hungarian government for a formal apology, claiming that the team of field journalists of the national RTS network had been beaten by Hungarian police and that this was “a blatant violation of the elementary rights and freedoms of journalists that are guaranteed by international conventions.”

Slovak TA3 network has also reported that a Slovak journalist was beaten and then detained by Hungarian police at the Horgoš border.

On the Hungarian border [police] beat and detained a Slovak journalist http://t.co/AVWmxXBCDr

People across the globe expressed outrage regarding the police brutality displayed by Hungarian police. Several journalists at the Horgoš border crossing said that it is becoming increasingly difficult to report on the events, while those following the events from around the world remarked at the disturbing scenes unfolding.

Not great for a journalist but I simply can't watch scenes from Hungary. World, UN, EU…..talk, act. #refugeescrisis #migration

Where do the refugees want to go?

War in Syria and violence and instability elsewhere in the Middle East, South Asia and Africa have driven a record number of refugees to make the often dangerous journey to Europe in search of safety. Many first arrive in the European Union countries of Greece and Italy with the intention of travelling on to Germany, already home to many of their family or friends and considered to hold more economic promise. 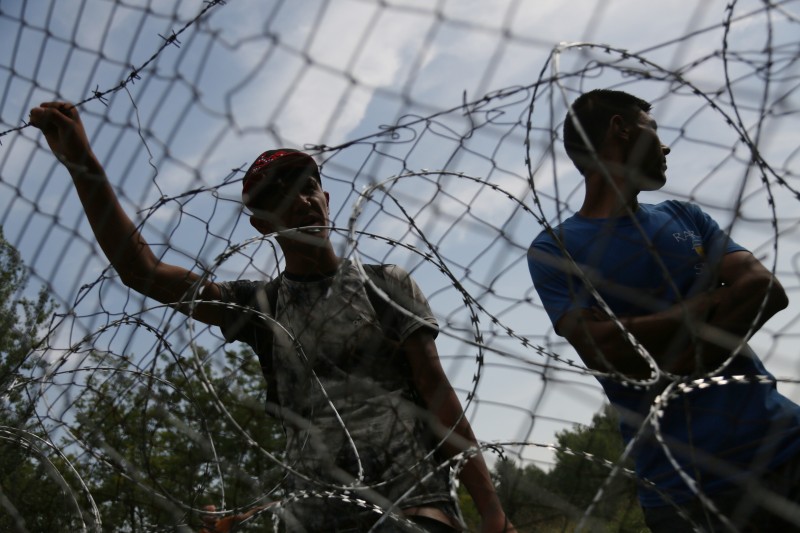 Röszke, Hungary. 15 September 2015 — Borders along Hungary and Serbia, including an official motorway crossing border in Roszke, Hungary, were closed, and the Hungarian government declared a state of emergency. Photo by Beata Zawrzel. Copyright Demotix

Until now, they have travelled via the Balkan route, passing through Macedonia and Serbia (which are not members of the EU) in order to enter Hungary, which belongs to the EU and the Schengen zone, an agreement allowing for passport-free movement among member countries.

According to EU rules, asylum-seekers must register in whatever European country they first arrive and risk being deported back to that country if they move around Europe. Even though Germany has stopped applying this protocol to Syrian refugees, many of the refugees are therefore trying to put Eastern Europe behind them as quick as possible without being identified en route.

On social media throughout Eastern Europe, many expressed anger at the seemingly unilateral decision on the part of either Hungary or the EU in handling the refugee crisis, without consulting their non-EU neighbors. Popular Serbian actress Bojana Maljević, who has been calling for aid for the refugees in Serbia for the past several weeks, implied that the decision could have future diplomatic repercussions among countries in southeastern Europe.

Of course this isn't the politics of Hungary alone. Which will be clearer soon.

In Belgrade coffee shops and Serbian social media, it's a commonly held belief that “someone is telling Hungary what to do” — that the EU simply does not want to take in most of those fleeing from Syria across the Balkan route.

Twitter user Goran Damnjanović summed it up well, implying that Serbia and other non-EU Balkan countries are expected to handle the refugee crisis in their own countries:

A day after the closing of the Hungarian-Serbian border, Hungary's Prime Minister Viktor Orban announced that the government was considering closing its border with Romania as well, as Serbia will “obviously no longer be a point of entry” for the refugees. An Economist article explains that the quarrel between Hungary and Romania “may be more about politics than about refugees,” diving into the historical and political connotations that might be harbored behind Orban's recent decisions.

Croatia is the youngest Eastern European EU country that has found itself embroiled in the crisis. On September 16, Serbian news agency Tanjug reported that Croatia's government had announced that it was considering “opening a corridor” for refugees to pass to other EU countries and that Brussels had responded negatively to this idea, saying that such a decision would be “against EU laws and the obligations of EU members.”

In the current crisis, Croatian President Kolinda Grabar-Kitarović announced that Croatia would be monitoring its borders with non-EU countries more strictly due to a “large number of refugees already having entered the country on the first day” of the Hungarian-Serbian border closure. Grabar-Kitarović said that the safety of Croatian citizens and the country's borders must come first, but the country's prime minister also added later in the day that Croatia would not be closing its borders and is not considering the option.

Other Central and Eastern European countries and their citizens have been weighing in on the story as it unfolds. A user on the satirical user-generated section of Slovak SME.sk portal, Gulas, posted an image of founder and former head of the Slovak National Party Ján Slota that reads, “Who do we keep our fingers crossed for now? Hungary or the immigrants?” 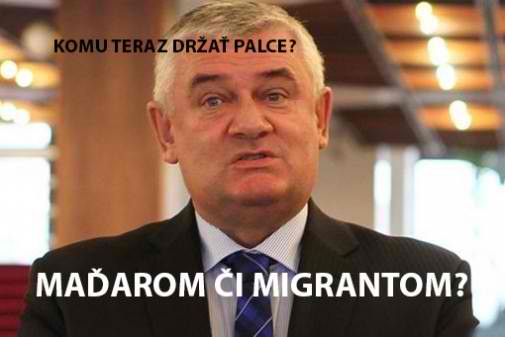 “Who do we keep our fingers crossed for now? Hungary or the immigrants?”