On the Scene: Explosion and Gunfire at Istanbul’s Dolmabahçe Palace 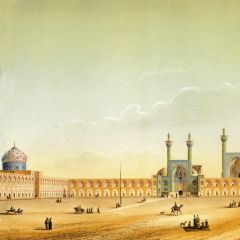 The peaceful exterior of the Dolmabahçe Palace. Photo by Jack Hennessy.

This is a partner post written by Jack Hennessy and originally published by Global Student Square. Republished with permission.

Two alleged gunmen have been captured after an explosion and gunfire rang out at Istanbul’s Dolmabahçe Palace today, a popular tourist attraction and seat of Turkish prime minister Ahmet Davutoglu.

Crowds panicked and people fled over gates and into the streets after two assailants unleashed a stun grenade and several rounds of automatic gunfire, allegedly targeting police officers standing guard at the Ottoman-era site. Police immediately blockaded the scene.

The Associated Press reported one police officer was slightly injured.

Though no group has claimed responsibility for the attack, according to the Associated Press the state-run Anadolu news agency reported that the assailants were members of the Revolutionary People’s Liberation Army-Front, or DHKP-C. The Guardian also reported that Turkish news agencies were quoting police sources as saying DHKP-C was behind the attack.

Dolmabahçe Palace stands as one the last great remnants of the Ottoman Empire in Istanbul. The founder of modern Turkey, Mustafa Kemal Atatürk, died there in 1938. The palace features exhibitions for tourists, though other areas house government agencies, including the seat of the Turkish prime minister.

The incident comes in the midst of heightened tensions in Turkey, as sitting President Reccip Tayyip Erdogan and the Justice Development Party (AKP) issue new offensives against Kurdish militants in northern Iraq and the Islamic State in Syria. Also on Wednesday, eight soldiers were killed in a roadside bombing in Siirt, a southeastern Turkish region bordering Syria and Iraq.  According to the BBC, that attack was blamed on PKK militants.

“Turkey is on high alert,” said Eyup Kabogan, 27, a bartender at the Pierre Loti Hotel in Sultanahmet, in central Istanbul about five kilometers south of the palace. “Even I have to watch where I am going when I walk down the street now.”

“I am Kurdish, by the way,” Kabogan said, adding, “but I know that there are other means to change things (politically).”

Tourists should stay away from crowded areas and police stations, Kabogan warned, though he said that terror groups are “not targeting tourists, but security officers.”

Turkey’s political landscape is in flux after Davutoglu’s attempts to create a power-sharing coalition failed last week. On Tuesday, he gave Erdogan a mandate to form a new government ahead of elections expected in November.

“I don’t really know what to say (about today’s attack),” said Berk Çoker, 21, who is Turkish and a rising junior at Stanford University.

A computer science major, Coker had plans to return to his home country after a software engineering internship in the San Francisco Bay Area this summer.

“As evidenced by the attacks and the unformed coalition, the political climate is pretty tense, making it an unsafe country for travel,” Coker said.

In response to growing violence, according to The Telegraph, the Erdogan government has detained more than 2,500 suspected members of IS, PKK and DHKP-C.