Vladimir Putin’s mustachioed spokesman, Dmitry Peskov, has tied the knot with his partner of five years, Tatiana Navka. Like Putin’s rumored love interest, Alina Kabaeva, Peskov’s new spouse is a former Olympic champion. This is Peskov’s third marriage, and the couple already has a child, born one year ago.

The wedding, which took place yesterday, on Saturday, August 1, was an extravagant affair hosted at the most expensive hotel in Sochi. According to the news website Gazeta.ru (a Kremlin-friendly publication, incidentally), the rooms at the Rodina Grand Hotel and Spa cost anywhere from 36,000-200,000 rubles ($580-$3,250) a night.

Yesterday, Gazeta.ru also published a rather controversial interview with Peskov’s 17-year-old daughter, Elizaveta, where she expressed ambivalence about her father’s new marriage, and explained her decision not to attend the wedding. At one point in the interview, Peskov’s daughter even said she feels more at home in Paris, where her mother lives, than in Moscow, though her father apparently insists that she remain in Russia to complete her education. “Europe is better adapted to the lives of ordinary people,” she explained, adding, “And I really like the mentality of Europeans my age—their lifestyle. I feel more at home in Europe.”

These revelations are particularly embarrassing for a high-ranking Kremlin official in today’s political climate, when much of the public rhetoric focuses on the West’s moral decadence and the injustice of sanctions over Moscow’s annexation of Crimea.

A day after the nuptials, Russia’s most famous anti-corruption activist, Alexey Navalny, has also joined the bandwagon of Peskov-bashing, publishing on his website evidence that Peskov wears a wristwatch worth at least $620,000. The Richard Mille RM 52-01, apparently photographed on Peskov’s arm, while clutching Navka for that fateful “you-may-kiss-the-bride” embrace, is worth four of his annual salaries. According to Peskov’s income and property declarations, he’s received no gifts worth this much money, and his earnings are simply too low to afford such an item. 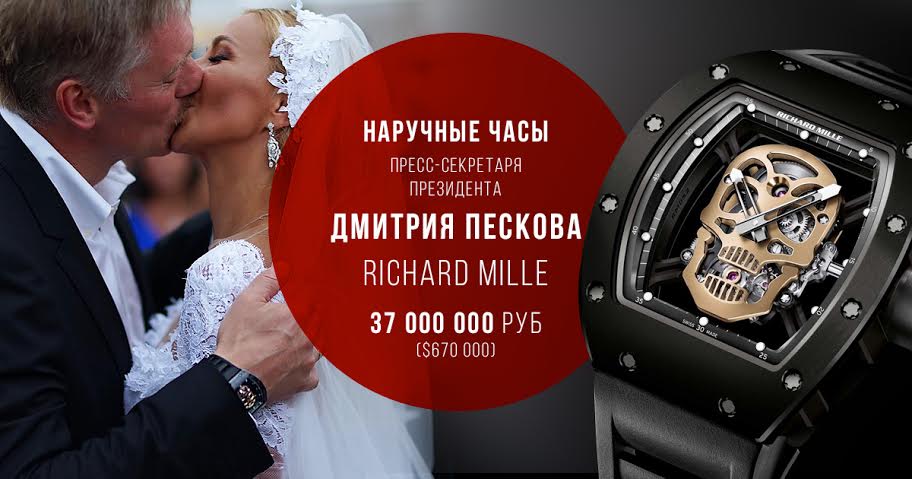 Navalny points out that his discovery would mean the end of Peskov’s political career, if Russia were a more transparent country. In November 2013, in Poland, for instance, Transport Minister Slovomir Novak was forced to resign after it was revealed that he owned an undeclared wristwatch worth just $3,500—as much as 112 times less than Peskov’s alleged timepiece.

In May 2012, following a protest in Moscow that turned mildly violent, Peskov said “protesters who hurt riot police should have their livers smeared on the asphalt.” Navalny says Russians who oppose corruption should remember Peskov’s threat, and know that it’s directed at them.