A recent Twitter spat between Ankara Mayor Melih Gökçek, and US State Department spokesperson Marie Harf has taken on a surreal twist.  On April 29, Gökçek, who is still remembered for trumpeting the disproportionate use of police force against citizens during the Gezi protests in June 2013 —  reminded Harf of her statements in support the protests with an irony tweet pointing to US police violence during unrest in Baltimore.

The plot thickened when US Ambassador to Turkey, John Bass decided that airbrushing his hair to a reddish yellow hue would constitute an adequate response to the Mayor's allegations of racism and police violence.

The opening salvo of the dispute came from Ankara’s eccentric Mayor, well-known for his late night Twitter outbursts, who shared a picture from his Twitter account showing Baltimore police brutally beating a subdued civilian during the protests that followed Freddie Gray’s murder.

The stupid blonde who said that the Turkish police use disproportionate force, where are you now?

@PressTV @marieharf Hypocritical Statist Sock Puppet would of been a better choice of words.

Turkish tweeps were in dispute over the comments. Some, like celebrity author Elif Şafak whose latest book faces accusations of plagiarism, rushed to Harf’s defence by denouncing patriarchy in Turkey:

Patriarchy in Turkey!! Ankara mayor calls US spokesperson "StupidBlonde"just because she happens to be a woman&blonde http://t.co/OIYj26AP0c

Other commentators observed the hypocrisy of selective sympathy for victims of police violence in both Turkey and the United States and criticised Gökçek and Harf equally:

Maybe she is doing what your dog media was doing during the Gezi protests and licking the government’s ass!

Later in the dispute, the US Ambassador seized on the opportunity to display his disputable sense of humour by posting a picture of himself with his hair photoshopped blonde on his instagram account to show support for his colleague.

The response in both countries was once again mixed.

In Turkey, regular detractors of Gökçek, who showed no sign of having actually followed the news coming out of Baltimore, applauded the Ambassador. But others have pointed out that institutional racism in the United States cannot be whitewashed — or even blonde-washed — in the same way the hair of Washington's Chief of Mission in Ankara can.

You haven’t killed any unarmed black people today. Must be difficult.

Similarly, US responses ranged from predictable exclamations of shock at the brutishness of a previously unknown Turkish politician, to condemnations of poor judgement on the part of the State Department:

Bearing in mind the low proportion of African Americans able to access top government jobs, one commentator pointed out that the Ambassador's joke might have been funny if it wasn’t in fact pointing to a well known reality:

We're all blonde, US envoy John Bass in Turkey said in response to Ankara Mayor's comment. I say "we know, all of you are blonde & stupid".

In conclusion, a dispute that started with an exchange of disingenuous sympathy for victims of police violence has ended the only way it could: a mixed media art piece featuring a priveliged representative of the so-called ‘Lilly White’ State Department pouring digital peroxide on America's race problems. 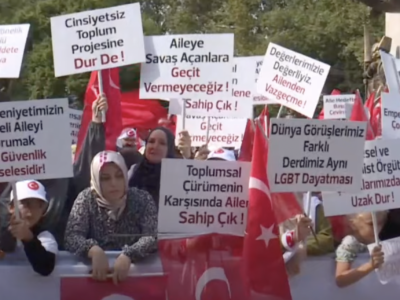