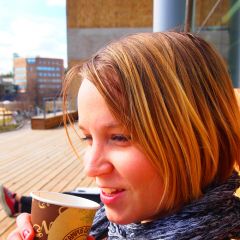 The Italian coastguard rescues two of the 156 survivors of the October 3 tragedy off Lampedusa Island. Photo by UNHCR under CC BY-NC 2.0

Over 800 refugees died in the disaster off the coast of Libya last month. According to a report by Amnesty International, the boat carrying the refugees capsized after too many people surged to one side in order to reach a merchant ship that was offering assistance.

Sadly, the April 18 disaster was not the only one to have occurred in recent months. The European border organisation, Frontex, which provided a mandate to Operation Triton to to monitor the coasts of the EU’s external borders in November 2014, says it can no longer afford large-scale rescue work and is committed to monitoring and surveillance only, while the national coastguards of the EU member states and commercial vessels do what they can to effect rescues.

That is unfortunate, because Operation Triton's predecessor, Mare Nostrum, was credited with saving thousands of lives during its one-year existence. Although the EU has faced criticism for its new non-humanitarian approach to sea-bound migration, Mare Nostrum cost more money than Operation Triton and migration as a whole is politically unpopular: some are concerned a coordinated rescue operation lowers the risks involved in boat crossings and thus increases the number of refugees and migrants planning to make them.

Nevertheless, Operation Triton has been unable to halt the influx of refugees to Europe. Amnesty International claims a drastic increase in the numbers of people trying to cross the Mediterranean in 2015 compared to the same period in 2014. According to the group's report, 2015 saw a 42 % increase in irregular border crossings in the first two months of 2015.

Several organisations and civilians continue to press for a response from EU institutions and for a large-scale, coordinated rescue programme:

List of 17 306 #migrants who drowned on their way to #Europe #Mediterranean In EU Parliament MEPs have to walk on it. pic.twitter.com/K6Y39uhMDT

Harald Höppner founded the Sea Watch initiative together with other volunteers in the wake of last year's Lampedusa shipwreck that killed 366 migrants to combat the worsening situation on the Mediterranean.

Sea Watch was brought to life by a number of families in Brandenburg, Germany and is currently run by a dozen volunteers from all over the country. The project, financed by private donations, aimed to use its own boat to oversee the maritime area between Malta and the Libyan coast, to provide first aid to boats in distress, and to report on their experiences at sea to the public. The initial timeline for the project has been set at three months.

We feel responsible, and no longer wish to sit idly by while people continue to suffer and die.

Sea Watch also promotes a culture of ‘hospitality’, of the kind preached by EU politicians but subjugated to a policy of exclusion in practice:

We've decided to fight for the humanisation of politics. Hospitality should be a part of our everyday lives once more. A civil maritime rescue service must be set up urgently, and the EU is unwilling. That's why we're seizing the initiative.

The implementation of the project will begin mid-May. A crew of 4-8 people will sail to the maritime area north-west of the coast of Libya and carry out a 12-day observation.

If they see a refugee boat in distress, the organisation will inform the relevant authorities and provide first aid, drinking water and food, as well as medical help including life rafts and life jackets if required. In compliance with the recommendations of the ProAsyl organisation, a pro-asylum NGO in Germany, the group does not take victims onto their boats.

Sea Watch works closely with Watch The Med, another private initiative founded in 2012. The group has evolved into a large network made up of activists, researchers, refugee organisations and seafarers, who document accidents together with the number of dead and injured refugees in the Mediterranean area using mapping technology. By using mobile phone data, wind and current analysis, and eyewitness reports, the exact position of the boats and accidents can be documented in order to subsequently determine who is responsible for violating international law and the rights of migrants on the high seas.

At the centre of the project is mapping technology, which creates an overview of when and where an incident took place and how many refugees were involved. However, the maps also depict how many refugees can be saved, meaning that a user could, for example, see that Watch the Med received a call by satellite phone on April 11 from a refugee boat with almost 1000 passengers off the Libyan coast. These refugees could then be saved after a request for assistance is passed on to the relevant authorities.

In an interview with Swiss online portal 20Minuten, Simon Sontowski, trained on the emergency telephone by Watch the Med in Zurich, spoke about his motivations for participating in the initiative:

Because I can do something practical. Watch the Med is a real lifeline within a political and human tragedy. Everyone agrees that it's terrible that so many people die each year, but the phrases “Our hands are tied” or “What can we do about it” often come up in this context. And it's just not right. Of course, we can't save them all – nor do we aim to. But we can help to ease the pressure slightly, and with this project, we want to draw attention to the fact that it shouldn't be our aim – but that of the EU.