On March 30, Peru's Congress voted to censure Prime Minster Ana Jara Velásquez, in the wake of recent disclosures of inappropriate information-gathering by the country's intelligence agency, known as the Dirección Nacional de Inteligencia (DINI). According to newspaper sources, DINI spied on domestic targets including members of Congress, business executives, politicians and journalists.

The motion to censure was brought in response to the Prime Minsister's “failure to duly investigate, denounce and sanction those accused of committing illegal acts within the DINI.”

Ms. Jara, an ally of President Ollanta Humala, insisted that the agency's reporting was in keeping with publicly available information.

I am grateful to our Lord JESUS for having given me the opportunity to serve my country in the Executive branch! It is an honor that this Congress has CENSURED me.

By a vote of 72 votes in favor, 42 votes against, and two abstentions, Jara was removed from office. The Fuerza Popular, Concertación Parlamentaria, PPC-APP, Dignidad y Democracia and Solidaridad Nacional parties all voted against Jara.

Renowned Peruvian author and Nobel prize laureate Mario Vargas Llosa, a vocal supporter of President Humala during the 2011 general election campaign, sent a letter to Ms Jara “congratulating her” for having been censured by the congress. Ms. Jara later published the note on Twitter:

Dear Ana: I respectfully submit these lines to you not as an expression of my condolences but rather to congratulate you for having received by way of censure an involuntary homage on the part of Congress.

The two most corrupt parties in history (on top of the disgruntled PPC [Christian People's Pary] and Solidaridad [National Solidarity Party]) censured Ana Jara. It certainly is an honor.

President #OllantaHumala: I want to underscore my gratitude to Prime Minster #AnaJara.

But not everyone agreed with these gestures of support. Raygada Cáceres @Carayca, who describes himself as a politics and news analyst, said:

Congratulatory note from MVLL to ANA JARA, is arrogant because he writes as though he is doing so on behalf of Peru and as though she had worked for him.

Ms. Jara's tenure lasted just eight months. Peru's intelligence services are accused of carrying out more than 100,000 data searches on opposition politicians between 2011 and 2015 as well as on Vice President Marisol Espinoza, which has fuelled speculation about Espinoza's relationship with the The American Popular Revolutionary Alliance (APRA) ruling party she belongs to. DINI is also accused of spying on business leaders, military personnel, politicians and journalists. Faced with mounting evidence, Vice President Espinoza publicly requested the resignation of the Prime Minister and accused her of being the politician responsible for surveillance of members of the opposition.

Government supporters characterised the decision to censure Jara as “despicable,” arguing that she was not responsible for DINI's surveillance or data collection.

The Storify network has collected quotes by lawmakers made during the censure debate.

Meanwhile, the newspaper El Comercio captured the impact of the historical motion on social media: 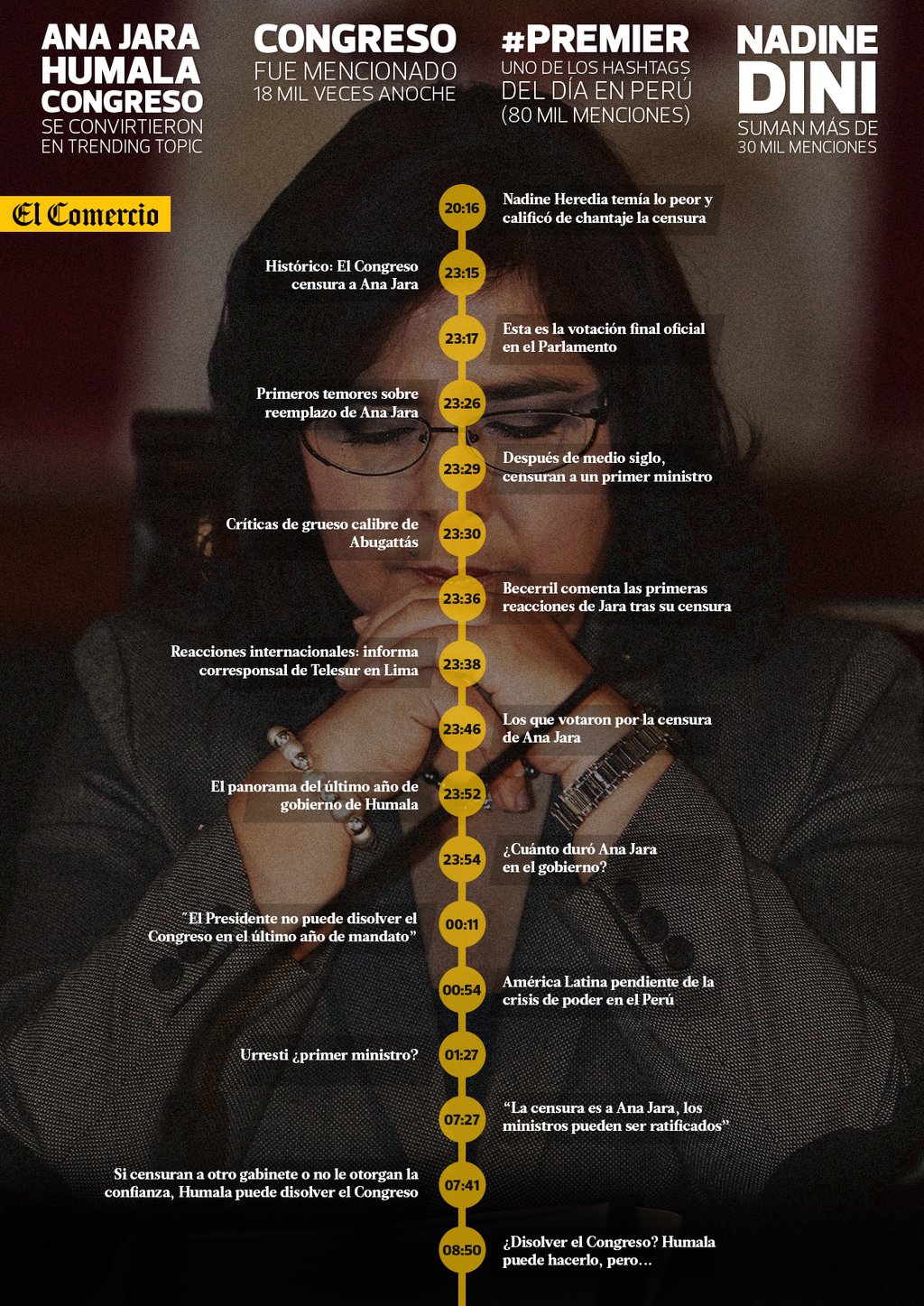 [A Twitter timeline suggests censure was just a form of blackmail on the part of Congress in response to rumours that the president will soon dissolve the legislature.]

In accordance with Peru's constitution, President Humala was constitutionally bound to accept Jara's resignation, which must come within 72 hours of the vote. Humala submitted the candidacy of a new Prime Minister, Pedro Cateriano on April 2. It was accepted by Congress.

The censure motion unleashed its own brand of humor in social networks, as evidenced by a collection of memes: [I am leaving the Palace…and going back to my regular congressional seat. “I've been kicked out of better places.”]

Global Voices recently covered another spy scandal that involved claims of Chile spying on its Peruvian neighbour; the case has led to two non-commissioned officers of the Peruvian Navy being court-martialed.