Is Blackface in Japan a Form of Racism or Respect? In order to project an aura of “blackness,” aging Doo Wop ensemble RATS & STAR have used blackface as trademark since they got their start in 1977.

Prior to their appearance with RATS & STAR, Momoiro Clover Z (aka “Momokuro”) recently developed a reputation for collaborating with glam metal acts. Like the American band KISS and other similar performers, glam metal bands sport heavy and outrageous makeup. In a new twist on the makeup theme, Momokuro decided to appear on TV in blackface with RATS & STAR.

Indeed, a not inconsiderable number of entertainers and comedians perform in blackface in Japan, where it has largely been unremarkable. In the age of social media, however, voices outside Japan are becoming more critical of what has been considered a playful and innocuous practice.

New York Times reporter Hiroko Tabuchi, who, with Martin Fackler was once the Times’ chief correspondent for Japan, was quick to point out the inappropriate and discriminatory nature of casually sporting blackface for entertainment.

Why Japan needs to have a conversation on racism (1) https://t.co/o07lYKoYri Preview of a TV show airing next month. pic.twitter.com/KDoDPVz6xJ

Tabuchi's remark was retweeted more than 700 times, igniting a discussion about whether or not blackface should be seen as racist in Japan.

Some Twitter commenters pointed out that, removed and transplanted from its American context, Japan's use of blackface is not intended to be racist, since most Japanese people have no idea of the cruel and racist origins of the practice.

Other Twitter users such as seth0et0holth agreed with Tabuchi that, intentional or not, the use of blackface in Japan is indeed discriminatory.

@HirokoTabuchi I agree. Also, “unintentional” racism is a huge problem: people not even necessarily trying to be racist but also not…

Others disagreed with this argument:

@HirokoTabuchi I'm just trying to understand how it's racist if there isn't malice in it. Arrogant, yes. Racist? Hmm…

Others argued that the use of blackface by entertainers in Japan was, in fact, a sign of respect for black people.

Twitter commentator @E=mcZ said that according to the Japanese way of thinking, making one's skin “black” was not racist, but is instead could be considered the purest form of flattery.

In a Japanese context, you can't say “sporting blackface equals racism.” We're not Caucasians. When Asians get a suntan we get pretty dark (think of Shigeru Matsuzaki or Yamanba Girls). So if Japanese performers want to play “authentically black” music, all they have to do is go out and lie in the sun. So, what RATS & STAR and Momokuro did is a kind of homage [to black performers]. [In the same way] the Ganguro trend from the 1990s wasn't racist either. 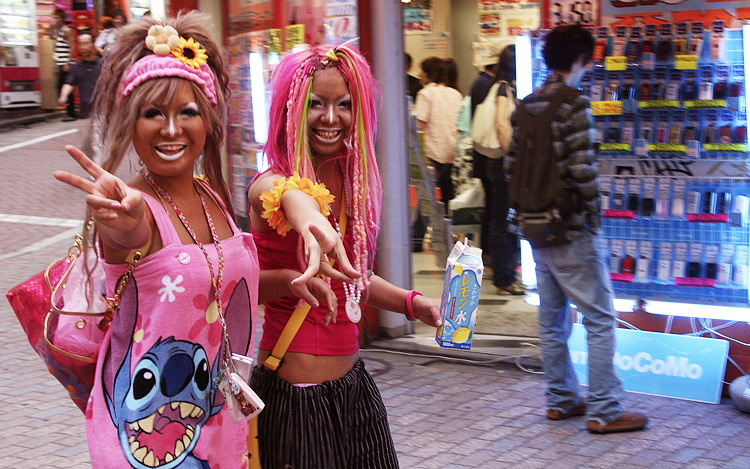 Another Twitter user attempted to take the concept of “blackface as homage” to its most logical extreme:

By putting on blackface, Momokuro were being racist! It doesn't make any difference if they didn't intend to be racist. It's not respectful at all! For example, if white folks or black folks donned yellow makeup and started singing enka [Japanese country and western songs] you could never argue it was “art.”

In reply, Twitter user Michael. A said that it can't be helped if blackface is interpreted as racism outside of Japan.

If you think about their entire musical style, I don't think it's being disingenuous at all to suggest that RATS & STAR did start out (back in the 1970s when they called themselves the Chanels) sporting blackface as a form of homage to black entertainers.

And Momokuro has been experimenting with face paint recently. When Momokuro adopted blackface while appearing with RATS & STAR they were just engaging in cosplay.

They had no idea what they were doing might be considered racist. However, you need to take into consideration the context that they did it in Japan when contemplating whether what they did was racist.

A commenter on this Japanese-language news article, which asks black residents in Japan about the controversy, says:

While I haven't researched all the details about racist aspects of blackface, blackface was used very intentionally in minstrel shows for bad effect. We need to create a world where putting on blackface has no racist connotations.

However, according to Diana Powell, an African-American student interviewed for the article, Japan needs to understand what black people have experienced in the first place:

If Japanese people want to show respect for or pay homage to black culture, they need to understand black history first.