What is your first language? Do you use it on social media or in other communications?

Even though more than 7,000 languages are spoken in the world, the Internet is dominated by a handful of them. For International Mother Language on 21 February 2015, Global Voices was part of an international community which promoted the campaign to Tweet in Your #MotherLanguage.

In Australia, it is estimated had between 300 and 400 Indigenous languages at the time of British colonisation in 1788. Of those remaining today, perhaps only a few dozen remain strong while many of the others are threatened. Approximately 75% of people in Australia speak only English at home. In addition to Indigenous languages, there is a very large number of Languages Other Than English (LOTE) spoken at home by mostly migrant families.

Before Sunday, it was not easy to find tweets or other social media in Indigenous languages. First Languages Australia has been working to change that and posted on Facebook the day before the tweetathon:

Those are Twitter hashtags as well as Facebook ones. There were already some tweets in ‘language’, as it is sometimes referred to.

One was by Kylie Farmer, an actor whose background is Nyungar/Bibbulmun (or Noongar) from Western Australia. Her tweet concerned an online video:

My beautiful aunties, please watch them, they speak of the whale's true story from long ago.. listen.. enjoy

The next two tweets were about use of Kriol. Several varieties of this creole language exist.

Creole is ‘a stable, full-fledged language that originated from a mixture of two or more languages’, according to Wikipedia. Ngukurr is a remote aboriginal community in Arnhem Land where Kriol is the main spoken language.

Kriol was also used to tweet about the impending arrival of category 4 Cyclone Lam on the coast of central Arnhem land of Northern Australia:

The man in question is Steven Schubert @senorschubert, a digital producer for @ABCNewsNT, who was covering the cyclone for @ABCNewsNT.

Maningrida has an amazingly complex language web, according to the Northern Territory government:

The traditional landowners of the country in Central Arnhem Land are the Kunbidji people whose language is Ndjebbana. Additionally, 13 different languages are spoken in Maningrida. Language is a key marker of social identity in the region, as clanship and social groupings are mainly based on what languages people speak.

Most people in the community can speak three, four or more of these languages—in fact Maningrida may be the most multilingual community in the world.

…the main languages spoken in the community [are] Burarra (46%) and Ndjébbana (12%). Eastern Kunwinjku, Na-Kara and Wurlaki are also quite widely spoken.

Anthropologist Evelyn Enduatta tweeted in Yolgnu, the language of East Arnhem, during the cyclone.

I'm not sure if anyone tweets in any of the Indigenous languages used in Maningrida. We’ll certainly be encouraging them to give it a try.

First Languages Australia has another initiative called Marrin Gamu where school students translate a song into their own language and create a video. The program is explained here:

For a selection of tweets from the day, please visit First Languages Australia's Storify: 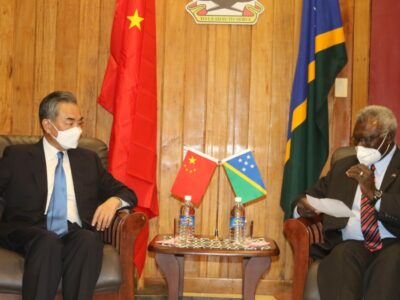