After Grozny’s December 4 gun attack, unidentified men retaliated by burning down the homes of the militants’ families, apparently fulfilling a threat by Ramzan Kadyrov, head of the Chechen government.

Sergei Babinets is a lawyer and staff member of Joint Mobile Group, the Grozny branch of the Committee Against Torture, a Nizhnii Novgorod-based NGO. After the arsons, Babinets posted online some of the first pictures of the destroyed homes, providing evidence that Kadyrov is actively pursuing his stated policy of punishing the relatives of suspected militants.

Less than 10 days later, Joint Mobile Group’s office, which doubled as living quarters for Babinets and his colleagues, was itself set on fire.

Back on December 4, when Chechen security services in Grozny were still fighting the last of the militants, Novaya Gazeta journalist Elena Milashina surmised on Facebook that the second stage of the counter-terrorist operation—the authorities’ retaliation—would be worse for civilians. Milashina noted that the militants, on the other hand, were careful to avoid civilian casualties:

It wasn't just a coincidence. [The militants] are not nice people. They are, however, excellent strategists. They know well what reaction will come from Kadyrov… Kadyrov will take revenge on the militants’ relatives, distant and close, with disproportionate cruelty. [But] in doing so, he can't even invoke fear, because it's not possible to be more afraid. The limit has been reached. This is why the militants killed in Grozny will be regarded as heroes… because common people are ALREADY under fire in Chechnya.

The counter-terrorist operation's second phase has proceeded according to Milashina's grim expectations. Groups of unidentified men, presumably Chechen special forces, soon descended on the homes of suspected militants’ families in Gudermes, Yandy, and other towns. An informant in Kotar-Yurt in the Achkhoi-Martan District described the campaign to the website Kavkaz Uzel:

They surrounded the Byutukaevs’ home, broke the windows and doors, and then set it ablaze. Despite the fact that the fire threatened to spread to other homes, they did not allow us to put it out. They drove people away with shouting and threats.

In rare effort to hold the Chechen authorities accountable for breaking the law, Igor Kalyapin, head of the Committee Against Torture, appealed to Attorney General Yury Chaika and Russia's top federal investigator, Alexander Bastrykin, to explore the legality of Kadyrov's promise to destroy the homes of militants’ relatives. This was the first time a civic activist publicly criticized Kadyrov in five years, since the assassination of human rights worker Natalia Estemirova in 2009. 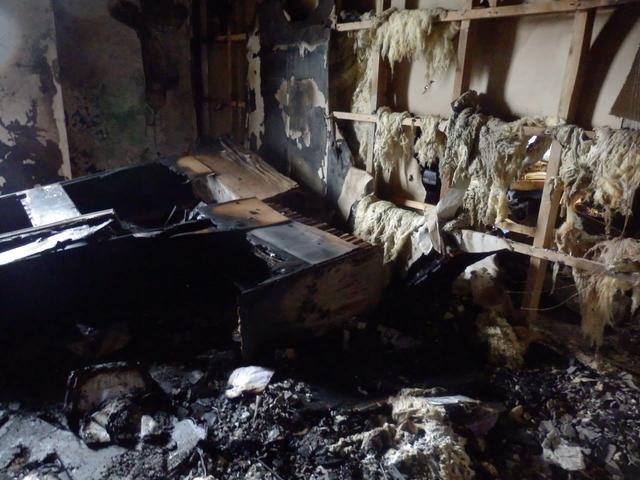 The aftermath of the fire that consumed Joint Mobile Group's office in Grozny. December 14, 2014. Photograph by Sergei Babinets.

Kadyrov's response to Kalyapin was almost instant. Writing on Instagram on December 10, Kadyrov wondered publicly if Kalyapin was working with the gunmen who attacked Grozny, funneling them money from Western intelligence agencies, whom Kaydrov accuses of supporting North Caucasian terrorists. The next day, while speaking at a press-conference in Moscow, unidentified men pelted Kalyapin with eggs.

Next, on December 13, a large rally, ostensibly “against terrorism,” took place in Grozny. Demonstrators registered their support for Kadyrov, and many in the crowd also carried banners antagonizing local human rights activists. One placard, for instance, read, “Kalyapin Go Home $.” On social media, some people suggested the protesters were there against their will or without really understanding the rally's purpose.

That evening, Joint Mobile Group’s office was burned down. Babinets and his colleague say they saw masked, armed men following them after the fire, as well. When they phoned the police to file an official report, two men in camouflage detained them instead, holding them for several hours and seizing the organization's computers and technical equipment.

So far, no one on Babinets’ team has been charged with any crime, leaving it unknown how far the authorities will go to antagonize the group.

Joint Mobile Group is one of the last remaining independent human rights organizations in the Chechen Republic. The group's lawyers offer Chechens a rare means to address social problems that no one else discusses. If recent incidents ultimately force the organization from Chechnya, the loss to the local population—with its many victims of kidnappings, torture, and murder—would be difficult to exaggerate.

In an interview with BBC, Babinets said:

Of course we are concerned about our safety, but we do not plan to leave the republic. Because we have a lot of work to do, and tomorrow there is a court hearing for one of our cases. That is why we must continue to work.