Astrophysicist Shares the History of the Rosetta-Philae Mission 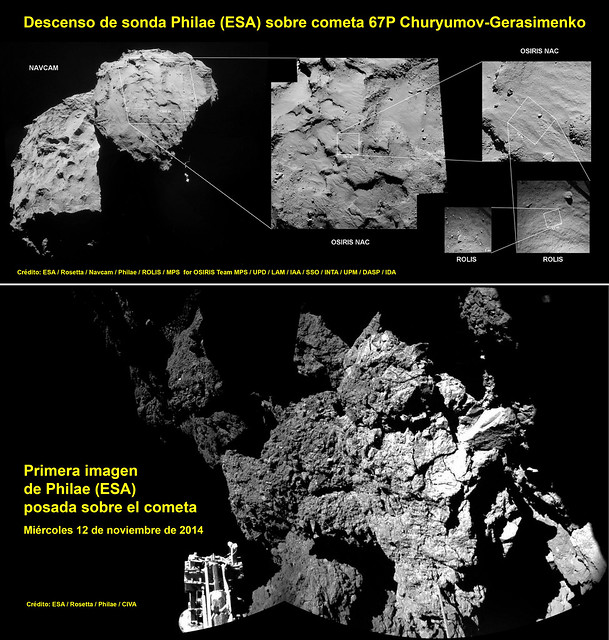 First image of Philae taken over the comet. Picture taken from Ángel R.Lopez's blog and used with permission.

The comet Churymov-Gerasimenko was discovered on 1969, the same year a mission landed on the Moon. Back then, no one would have imagined that 45 years later a small spacecraft called Rosetta transporting a landing module and the hopes of thousands would touch down on surface of a comet known as Chury.

Astrophysicist Ángel R. López shares on his blog that this interplanetary journey spanned 10 years and 64 billion kilometers. Furthermore, this marks the first time that human inventiveness has made it all the way to a comet.

But this long trip isn't important just for those reasons; it also intends to clear up such transcendental doubts as life on Earth, which could have arrived on board a comet, as several experts claim.

This blogger and astrophysicist also details the cost of the mission:

Mission Rosetta-Philae has cost European people 1,400 million euros, distributed over 20 years. This means 3.5 € per European citizen to be distributed in those 20 years. Little more than 20 cents per year, that is.

There are also some people that are opposed to this expense, but, as Ángel R.Lopez notes, it's worth it, as a deep and important issue for human beings, if we want to stop living in the past.

This post was part of the twenty ninth #LunesDeBlogsGV (Monday of blogs on GV) on November 17, 2014