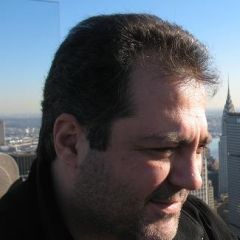 Citizens protesting in Tetovo on Friday, November 7, 2014. Photo from Facebook by Amir Selimi, used with permission.

Hundreds of residents in northwestern Macedonia protested against their government's decision to extend yet another deadline for the Jugohrom steel factory to install anti-pollution filters at their seven furnaces in Tetovo, the country's most polluted city.

There have been several extensions of this deadline through the years. The last one was in April 2014 when the plant was granted a 6-month period to undertake necessary measures to reduce pollution. But the deadline passed and the factory took no steps to comply with environmental standards. Tetovo residents, who protested earlier when similar promises were broken, took to the streets again on Friday, November 7, 2014.

Jugohrom is identified by experts as a major air polluter in the Pollog region in northwest Macedonia. The region includes two major cities Tetovo and Gostivar, which have more than 300,000 residents. Pollution in this region is extremely high and it becomes worse in the winter when heating season begins.

The situation is alarming because the density of air pollution in the region, specifically particulate matter PM10, which the World Health Organization (WHO) says is a harmful air pollutant linked to excessive premature mortality, is currently 8 times higher than permitted limits. In  winter, the density of PM10 in the air can surpass the permitted limit by more than ten times. The WHO says exposure to high levels of this type of air pollution drastically increases the risk of respiratory infections, heart disease, stroke, and cancer.

Arianit Xhaferi from Eco Guerilla, the organization that organized the protest under the slogans “Don’t Be Silent, Raise Your Voice” and “We want fresh air!” in Tetovo stated:

This is just the beginning; we will protest again and will earnestly seek for fresh air. We cannot stop our breath, but they can stop the factory with a push of a button. We will not give up because our demands are legitimate.

Let's make this clear, the goal is to install filters not to end jobs!

Many Macedonians are revolted by the government’s attitude and carelessness, narrowing down the health of thousands of citizens to a bureaucracy and deadlines extensions. Global Voices author Filip Stojanovski responded to questions from regional and international bloggers and media on Twitter, explaining the protests:

The portal Portalb.mk is covering pollution issues in Macedonia closely and is continuously providing coverage of the protests against air pollution in Tetovo. In an article entitled “Will the Macedonian Government shorten the life of its citizens” [al, mk] provided a history of the pollution problem along with a list of unfulfilled promises made by the government and the repeated deadline extensions that have been granted for installing filters in polluting factories.

The protests also received notable international attention, the Los Angeles Times published a photo from the protests in Tetovo.

A video was also created by protesters and shared on social networks calling for concrete action by depicting the future of Tetovo, if the current rate of air pollution continues.