How Young, Independent Women are Making a Space for Themselves in Pakistan's Music Industry 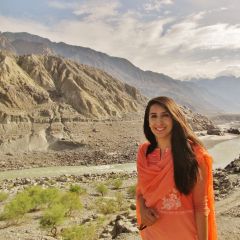 At eighteen, Sara Haider started playing music by herself, singing Islamic songs and then transitioning into Pakistan's underground rock scene. Without any artists in her family, she trained in classical music at Karachi’s premier music institution (NAPA), but found difficulties navigating the country's male-dominated industry.

“Male musicians and boy bands were a huge barrier for me when I first started making music,” says Haider in an email interview. She was initially discouraged from performing songs deemed ’manly,’ but found a musical role model in 75-year-old Saffiya Beyg, a self-taught female eastern classic musician. “Learning under Saffiya was fantastic for me, particularly being a teenage girl who didn’t know how difficult it was to do this,” Haider says.

Three to four decades ago, women like  Noor Jehan, Iqbal Bano, Farida Khanum, Abida Parveen, Nayyera Noor, Tina Sani and Nazia Hassan dominated the stage in Pakistan’s music industry, but things have changed as pop, rock and East-meets-West fusion bands have taken over. In this new musical order, young and independent female artists like Haider must chart their own paths. This is particularly true in a country where there are few formal music schools, and music is a hunar (skill) traditionally passed from generation to generation within families, if not through private classically-trained ustaads (teachers).

“Females in Pakistan do not have the same opportunities to do anything, least of all music,” according to Haider. She was born in the progressive mega-city of Karachi, a far cry from Pakistan's Khyber Pakhtunkhwa province, the site of a short-lived Taliban insurgency that proscribed music and dance. Yet, even in Pakistan's most liberal city, she notes that women in Pakistan cannot access the same musical opportunities as men.

“If a girl from a random Pakistani household told her parents she wants to be on stage with five male musicians and a mic in her hand every night, things wouldn’t go too well,” Haider says.

As Pakistan’s music industry has grown and formalized, it has moved away from classical music to pop and rock. The under-participation of women in Pakistan’s new music industry is emblematic of a broader gender gap. Pakistan holds the globe’s tenth-largest labor force, but suffers from chronic female shortages in the labor market. After Yemen, Pakistan ranks last in the world for equal job participation.

Where are the music schools?

In music, this inequality is partly rooted in lack of access to music education. South Asia's hereditary politics means musicians normally emerge from gharanas or musical families. For those born without a musical pedigree, music education requires tutelage from an ustaad, or teacher. The mentorship of ustaads, whose one-on-one support supplants formal education, is deeply entrenched in South Asia’s traditional music culture.  With a few exceptions (like Safiya Beyg), Pakistan’s most illustrious ustaads are male.

“Women, who are not allowed to travel a long distance or to another city to work on her song at a decent studio, are usually dependent on the nearest or most approachable ustaad,” Fazli says.

According to Pakistani pop artist Zoe Viccaji, Western musical training is virtually nonexistent in Pakistan and hopeful musicians must rely on self-training.

“There's not really a music education system. I just started vocal training 2-3 years ago. Every year, I look at courses online,” Viccaji says.

In Pakistan, music is rarely incorporated into the national curriculum, leaving most students to learn on their own—though most never do.  In a 2011 study in the Pakistan Journal of Social and Clinical Psychology, 90% of surveyed youth responded they did not play an instrument. Formal music institutions like Karachi’s National Academy for Performing Arts (NAPA) are rare, only emerging in 2005.

This makes anyone with musical talent in high demand, including women.

Ejaz studied eastern classical music in Pakistan under the mentorship of Ustad Sultan Fateh Ali Khan and audio production in Malaysia’s International College of Music. “Not a lot of people expect me to know what to do in a studio and how to do it, but they see me do it and they take a back seat,” Ejaz says.

Although Ejaz is a successful music producer, it remains hard to find other female producers in Pakistan. Worse, with Pakistan’s national school system ignoring music education, ambitious artists have no choice but to self-teach, take expensive private classes, or go overseas for training.

“The music industry should be flooded with female producers, sound engineers, drummers, and guitarists–clearly, there are terrible barriers,” Haider says.

“Every time you plan a concert, it inevitably deals with strikes or shutdowns,” Viccaji says. “For example, people discourage you on Chand Raat (eve of Eid) and tell you not to perform by saying ‘It’s a religious festival, playing music trivializes it.”

Although security challenges affect everyone, the absence of safe venues in Pakistan can be worse for female performers, who largely perform to crowds of men.

“It can get scary being surrounded by a sea of men and a handful of women — you just have to ask yourself how badly you want to do this,” Haider says.

Since most gigs are at night, Haider says women face additional security challenges. Performing during late hours can be regarded as unseemly by militant groups like the Pakistani Taliban.

“Musicians don’t work 8 am jobs. Our work starts later and ends later,” Viccaji says. Tinting her car windows, Viccaji often drives alone post-midnight in Karachi, one of the world’s most populated cities. Karachi is synonymous with street crimes and kidnappings in the eyes of most Pakistanis.

“Everyone asks, ‘how can you drive at 3-4 am in the morning in Karachi? You’re asking for something to happen.’ They’re fearful of the fact that you’re a girl. You’re not even safe from cops,” Viccaji says.

After studying in the USA, Viccaji became accustomed to walking alone on the streets, and said returning to Karachi required her to re-assess her safety metrics. Most of her peers requested that she take a male accomplice everywhere while performing, which she found disconcerting.

Viccaji is cognizant of the myriad ways gender shapes the way other industry professionals treat her. At the age of seventeen, Viccaji joined the band ‘Ganda Bandas‘ (Dirty Humans), but now performs as a solo artist, requiring her to make independent choices—without the help of men.

“Even when I was hiring a manager, I felt I was only taken more seriously when my father, a male figurehead, was there,” Viccaji says.

Viccaji recalls one embarrassing incident where she invited a male producer to her home for a meeting.“He later told me that ‘I’ve never invited to a woman's home alone—he had never experienced this before in Pakistan.”

“I'm constantly being mindful that as a musician you are working alone. As a female you have to be wary of the way you talk to guys, so there is no misreading. If I was guy, I can be sure that this is just space of work.”

Haider says that among her own friends, the same trope of familial discouragement materializes to deter even the most talented women.  “A good friend of mine sings beautifully. She picked up the guitar at 15 and wrote her own stuff at 17, but she belongs to an extremely conservative background,” Haider says. “She is educated and well-off—her parents let her go to school with boys and learn how to drive and wear jeans. But singing in front of a crowd or being on TV is out of the question. Stories like this are everywhere,” Haider says.

“People channel their frustration and their hope into their music,” Haider says. “No matter what anyone says about the music industry in Pakistan, it’s a great force of emotion and catharsis.”

Despite the odds, Pakistani women who join its emerging music industry are embraced, Fazil says: “The industry is looking for women artists.”

And there are upsides to being one of the few women. Given the fewer women, Viccaji notes less competition. Once a woman attains a high status, such as Abida Parveen or Nazia Hassan, there is generally more appreciation for those who achieve high recognition and mass appeal.

“There aren’t many female musicians–there aren’t that many musicians in general in Pakistan, so there's a bigger possibility of more people hearing the music,” Viccaji says.

Also, see our in-depth coverage Fighting for Their Art Against Censorship.

This story was commissioned by Freemuse, the leading defender of musicians worldwide, and Global Voices for Artsfreedom.org. The article may be republished by non-commercial media, crediting the author Sabrina Toppa, Freemuse and Global Voices and linking to the origin.