The Prime Minister of Trinidad and Tobago, Kamla Persad-Bissessar, at the opening of the Commonwealth Business Forum in Perth, Australia. Photo by ©Commonwealth Secretariat/Annaliese Frank. Used under a CC BY-NC-ND 2.0 license.

Both houses of Trinidad and Tobago's Parliament have approved controversial constitutional reform, which now awaits assent from the country's president, Anthony Carmona, before it becomes law.

Many citizens were up in arms about the proposed amendments, some of which included a ten-year term limit for the office of prime minister, the right to recall members of Parliament, and automatic run-offs when no candidate has more than 50 percent of the vote. The run-off election clause struck a particularly discordant note, as some saw the potential for it to make tribal voting more entrenched and allow the two-party system to thrive. It didn't help the government's cause that the run-off idea had not been included in the public consultations on constitutional reform and that the country's Elections and Boundaries Commission, under whose purview national elections fall, confirmed that it had not been consulted about that particular amendment.

The Senate debates the Constitution Amendment Bill tomorrow and from tonight we’re going to be outside the Parliament keeping watch over what is left of our democracy.

Springer cited a letter from Winston Riley to the Senate of Trinidad and Tobago, underscoring the point that some of amendments to the constitution had not been recommended by the Constitutional Reform Committee:

We write to inform you that an Assembly of Citizens drawn from a number of civil society organisations has joined the call for a halt to the parliamentary debate on the Constitution Amendment Bill, 2014.

The Assembly […] wishes to alert you to the fact that the proposed amendment to the Constitution has been brought before you without input from the public. This is in direct contradiction to the Prime Minister’s pledge of engaging ‘a system of participatory democracy’ as the basis of the Commission’s work.

Some commenters thought the reforms were positive. “Mamoo”, for instance, believed the run-off provision would actually kill ethnic voting:

I am confident after all the emotional halabaloo is gone Trinis will realise that power really is in their hands. Trinidad has several active political parties […] Under the first past the post system the standard was low, a party gaining 35% of the vote could win the seat. Today they are required to woo at least 50% of the voters (except in the 25% scenario) to their side. That means ethnic voting will lose its appeal in the second ballot and people will be looking for someone who could represent them effectively, to send to Parliament.

The PNM [the People's National Movement, currently in opposition] embrace the ‘run off’ in their Constitution but does not want it for the nation. To be clear the run off does not favour any political party. It truly places power in the hand of the voter.

Many pointed out that according to Section 61 of the Trinidad and Tobago Constitution, President Carmona has the authority to veto the bill. The watchdog group Speaking Out T&T has been pushing this point, to counter the argument of those who believed the President was obligated to sign the law:

The constitution gives him that power as a check and balance to preserve the principles of democracy. Don't buy into the propaganda propagated by those who are clearly paid off bloggers following a political mandate.#DontBuyTheTrash

Ricardo Roberts believed that the criticism of Carmona might be overdone:

I have no issue with this group's position because I too wish that the President does not sign the bill into law…my only issue is that we don't have to be disrespectful to the sitting Head of State.

Several groups, including the Movement For Social Justice, a former member party of the coalition government, have planned to petition Carmona to veto the bill. The president can assent to the bill anytime during the life of the current Parliament. 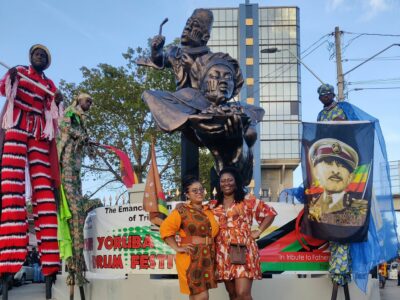