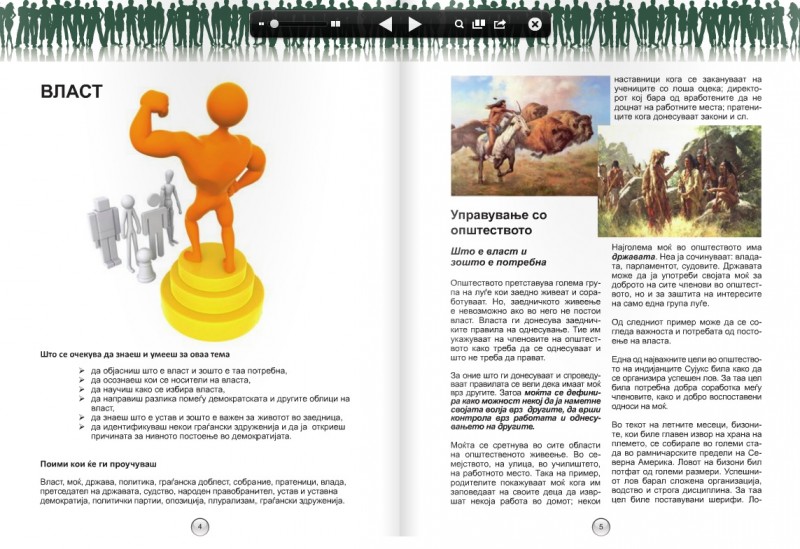 Depiction of “government” from the state-published textbook “Civic Education for 8th Grade” for primary school in Macedonia. Screen shot of two pages of e-version. Click to enlarge.

A brightly colored strongman lords over a group of dull grey people. The illustration is meant to depict the role of government and appears in an official primary school textbook in the democratic Republic of Macedonia.

But political analysts, bloggers and social media users are beginning to question that “democratic” label into question, debating whether the country has backslid on democracy in recent years.

The illustration is from an elementary school textbook, “Civic Education for 8th Grade” by Gordana Trajkova Kostovska, Ksenofon Ugrinovski, and Krste Vasileski. It was published in 2010 by the Ministry of Education and Science of Republic of Macedonia and is available online in Macedonian and Albanian.

Macedonian media, with the exception of a few independent news portals, such as Plusinfo, PortAlb, Radio MOF, and Taratur, failed to cover the scandal. In early 2014, social media users warned about the book's contents.

Social media users and foreign officials alike pointed out that it isn't just about schoolbooks. Erwan Fouéré, a former European Union special representative and head of the EU Delegation in Macedonia, wrote that “democracy has lost its meaning in Macedonia” in a much debated opinion piece published right after the 2014 elections in Macedonia:

The Oxford Dictionary defines a democracy as “a state having government by all the people, direct or representative; a form of society ignoring hereditary class distinctions and tolerating minority views”.

Judging by its record in recent years, the VMRO-DPMNE governing party definition is radically different; it goes like this: a state where government controls all the levers of power, including the judiciary and the electoral process, does not tolerate any minority or dissenting views, and uses fear and intimidation to exercise its authority over society.

VMRO-DPMNE, the ruling conservative party, won both the parliamentary and presidential vote in those elections, ensuring a third term for themselves. They first came to power in 2006 with a promise to improve the economy and finish the well-advanced process of integration into EU and NATO.

Eight years later, Macedonia remains a poor country, with the highest level of income inequality in Europe. Few foreign investors have accepted the offer of cheap, exploitable labor and tax breaks. The impact of massive emigration remains “unknown” as the government refuses to conduct a long overdue census.

A veto from Greece led to a failure to join NATO in 2008, while pro-EU reforms have shown “little progress”, as the ruling parties focused on cronyism, nationalist propaganda, and populism, with policies comparable to Hungarian Prime Minister Orbán, who called for the end of the “liberal state” in his country in July 2014, and Turkish President Erdoğan, who has often been accused of running an authoritarian regime in his previous 11-year stint as the country's prime minister.

Captured state institutions, in particular within the judiciary system, and state resources within the realms of media advertising, government jobs, farmer subsidies, pensioners’ benefits and the likes, serve as tools for distributing political ideologies ahead of elections and in general.

Starting with freedom of expression, Macedonia's rank has plummeted on all relevant human rights indexes.

Prior to the elections, the author of Sandokan blog explained why the ruling party would win the election, again:

Since 2006, The Party has been using what they refer to as “smart politics”. It has created many groups of citizens that are dependent on the state. The party is gaining the votes of the people in three ways:

The most popular way of gaining votes is by means of nationalism. Since 2006, the members of The Party have been declaring themselves “patriots” and people who are “always ready to protect Macedonia and all things Macedonian”. They have made countless claims that Macedonia will not change its name, even if it’s just to irritate all Greeks, Bulgarians, and every other “enemy” of the country. You may find me strange, but I believe that The Party wins a tiny percentage of votes by expressing nationalistic views.

Another way of winning votes is by employing people in state companies. According to the EU, the administration should not consist of over 90.000 employees. And yet, Macedonia has approximately 200.000 employees in this sector. Simply put, The Party has employed too many people in the administration, as well as the state companies, winning many votes in the process. Additionally, The Party doesn’t have to threaten any of these employees with expulsion in case they don’t vote for it; Each and every single one of them knows that if another party wins the election, they will lose their job. Hence, the employees in the administration will vote for The Party. It’s like they feel indebted to The Party, and they feel that if they pay their debts, they will keep their friends… and their job.

The same can be said about public enterprises. It’s an open secret that they are dealing with the issue of over-employment and it’s the main reason for their debts. The Party is aware of the issue, but it doesn’t consider it a problem. A clear example of this is the employment of over 1600 people in “Makedonski Shumi”, (not) by random choice. After the whole charade was over, The Party decided to grant “Makedonski Shumi” debt relief of 40 million Euros.

The third way, and probably the most efficient of the three, is by making people feel as if they owe everything they have to The Party. The Party has successfully achieved this effect by increasing welfare, providing subsidies and increasing the benefits and pensions for senior citizens. As a result, farmers think that the subsidies are actually paid with money from The Party and they get the impression that The Party is acting in a humane manner. The same opinion is shared among seniors and those eligible for welfare. What these people fail to realize is that the money comes directly from the pockets of every citizen of the Republic of Macedonia.

How did The Party get so much money, in order to create the aforementioned groups of citizens?

The answer can be summed up in one word: Loans.

During its 8-year rule, The Party has succeeded in making Macedonia owe millions and millions of Euros. Just this morning, I read that Macedonia had a gross external debt of 2.2 billion dollars back in 2006. Last year, that same debt was 5.1 billion dollars (source: emagazin.mk).

Another aspect of this rule is using nationalism to distract the populace, making the security prospects precarious, which is noted by various analysts. As human rights activist; writer and producer Xhabir Deralla repeatedly pointed out, “Macedonia is Paying For Its Rulers’ Cynical Games:”

Ethnic tension is an endemic problem in Macedonia as it is. Whether it takes the form of fights on buses, in schools, in sports arenas, or on the streets, matters little. What matters is that tensions are high, constant, and can erupt on any occasion.

For years, these deep divisions along ethnic, religious and political lines have been used as means of creating a heightened climate of ethnic animosity in the run-up to elections.

Such was the case in the local elections held last year. The same atmosphere was created and maintained during the presidential election this May.

In fact, ethnic-based policy disagreements between the two ruling parties, VMRO-DPMNE and the Democratic Union for Integration, DUI, were the reason for the calling the parallel early general elections alongside the presidential polls.

VMRO rode into the polls on a wave of nationalism, demanding that people give them an absolute majority in parliament, so that they would not be held hostage by their ethnic Albanian partners.

Over all these years, the DUI has played along with this game. This smaller, Albanian version of Gruevski’s party, feeds off the same tensions, which boost a climate of nationalism among Albanians. At the same time, the party obediently follows all the key decisions of its government partner.