An Entrepreneur Rewarded for his Innovative Healthcare Work in Cameroon 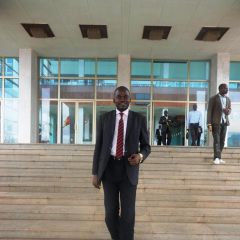 Mr Petsoko being awarded his prize – with his permission

The curtain has just come down on the tenth “Positive and Winning Africa Oscars”, held at the Hilton Hotel in Yaoundé, the political capital of Cameroon. This year, the event organised by the NGO “Positive and Winning Africa” rewarded Cameroonian Clément  Petsoko for his innovating healthcare projects. For a decade now, sponsor Hervé Mba and a jury made up of a dozen public figures to award prizes to African personalities whose innovative projects could help the progress of the African continent.

The Golden Oscar for Man of the Decade was presented to Clément  Petsoko, PDG of the Morgan and Wilfried laboratories. The jury rewarded Petsoko for “his capacity to overcome the numerous difficulties he has faced in recent years”. As he was awarded his prize, the happy winner stated:

I want my prize to serve as a lesson to young people around the world, who should remember the saying “it's a rocky road to success,” and that achieving your aims requires courage, self-sacrifice and determination.

Dr Clément Nossupuwo  Petsoko is a homeopath by training. Already awarded the prize for Man of the Year 2013 in Cameroon by Mosaïques International, Petsoko is also active in the community via his weekly newsletter promoting foreign communities, decentralised local authorities, tourism and general information.
In his thank you speech, Petsoko spoke of the fragility of success. And in fact, his journey has encountered many hurdles and controversies. Earlier in his career, Petsoko was accused by Cameroonian health authorities of “leading a huge publicity campaign on local TV channels, in violation of the legal restrictions on advertising medication.” Following these accusations, the distribution of his flagship slimming programme was banned in Cameroon. On 14 November 2013, the Cameroonian government lifted the ban on selling the programme. Petsoko has also suffered setbacks in his personal life. Divorced from his wife Christelle Yameni several years ago, she took Petsoko to court in 2008 for committing indecent acts on minors below the age of 16. The couple was married since 18 December 1998. On 24 March 2010, the Mfoundi High Court in Yaoundé decided to dismiss the case.