Not a Peep From Turkey's ‘Penguin’ Media About the Opposition

After the Gezi protests, the Turkish mainstream media earned themselves the moniker “penguin media” because of their pro-government messaging and skewed portrayal of the protesters. When Turkey's prime minister Recep Tayyip Erdoğan declared his candidacy for the 2014 presidential election, to be held August 10, many expected a second wave of media manipulation. Once the electoral race began in earnest, the media failed to prove them wrong.

Most of the corporate mainstream media in Turkey appear reluctant to publish stories about other candidates. Rallies for the two opposition candidates Ekmeleddin İhsanoğlu and Selahattin Demirtaş, who few think pose a major challenge to Erdoğan, typically attract a handful of reporters,compared to the droves that attend public gatherings for Erdoğan or his working visits across the country.

It is Erdoğan's meetings that claim the headlines, which themselves rarely differ significantly across outlets:

The bias on Turkish state television (TRT) is even clearer.

Statistics below show that TRT and its sister channels give almost six times more coverage to Erdoğan than one of his his two opponents, Selahattin Demirtaş. Demirtaş singled out TRT chief İbrahim Şahin for blame, warning him: “When I become president, I will fire you.” Şahin retorted: “If you continue to talk like that, I'll cut your broadcasts.”

Şahin's response stirred a political debate about subjectivity in the media, but deputy prime minister Bülent Arınç leaped to his defence: “Of course TRT will focus on Erdoğan [instead of other candidates]. He is the prime minister. Who are they?” This is a screenshot from a one week report on TRT Haber (TRT News) channels concerning broadcasts about the three presidental candidates.

In the last few years, a growing number of journalists have accused Erdoğan and his AKP (Justice) party supporters of demonizing independent media:

PM Erdogan says @TheEconomist‘s Turkey correspondent @amberinzaman is “a militant pretending to be a journalist”. Crowd boos her. #Turkey

Erdoğan's critics say the Turkish premier himself increasingly ignores invitations to speak to independent television, preferring to bask in the glow of the friendly coverage and staged Q & A sessions provided by channels aligned to him.

Oğuz Haksever found the page bookmarked in Erdoğan's book with his question on it.

In this grim media atmosphere, satirical outlets with large online followings such as Zaytung, have gained popularity. Here Zaytung tweets:

TRT viewers were shocked to find out there are three candidates in the election.

There is also no hiding place for Erdoğan in the International media. For example, the latest installment of The Economist's Week Ahead podcast features the magazine's Turkey correspondent Amberin Zaman and her concerns over creeping authoritarianism in the country. Russian journalist Leonid Bershidsky, meanwhile, writes that Erdoğan is becoming more and more “Putinesque” as time goes on:

Like Putin, Erdogan distrusts social networks, believes his opponents are traitors and invokes external threats to reinforce his popularity at home. 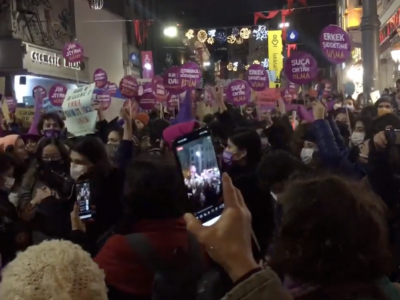 The protestors' main demand was for Turkey to rejoin the Istanbul Convention, an international treaty pledging to eliminate domestic violence and promote gender equality, which Turkey withdrew from this year.