Russian Internet users love making fun of American political figures. For the past several years, President Barack Obama has undoubtedly been the RuNet’s favorite target, but the tide of mockery has recently shifted to another person in the US government. Russians’ newest victim isn’t the Secretary of State, John Kerry, who has sparred with his Russian counterpart, Sergei Lavrov, for months now over tensions in Ukraine. And it isn’t Senator John McCain—the hawk who rallied protestors at Kiev’s Independence Square. Neither is it Vice President Joe Biden, whose son accepted a position on the board at Ukraine's largest private gas firm.

As the Ukrainian crisis has developed, Psaki has taken the brunt of anti-Americanism on the RuNet, becoming the subject of numerous photoedited images and videos. Psaki has gained notoriety for her daily press briefings, where she has revealed certain gaps of knowledge, given tangled explanations, and showed her irritation with Russia Today (RT) correspondents. A slideshow on RT’s website shows Psaki’s so-called “most embarrassing fails,” highlighting moments from her press briefings that Internet users have mocked and criticized.

Two of the instances in RT’s montage have received particular attention online. On May 12, Psaki denounced the practice of “carousel voting” during the separatist referendums in Donetsk and Luhansk. When a reporter asked her to define the term, however, Psaki was unable to do so. (Russians are understandably more familiar with this form of voter fraud, as it was widely reported in the 2011 parliamentary elections.)

The Western media largely ignored Psaki’s slip-up, but Russian news agencies offered the story as proof of the US government’s incompetence.

On April 10, Psaki misspoke and immediately corrected herself, when describing energy flows in Europe.

Again, Russian news outlets jumped on the gaffe as evidence of the State Department’s ignorance about Russia’s relationship with Europe.

On the Russian Internet, Psaki’s public persona has taken on a life of its own. Not content with the things Psaki has actually said, some bloggers have scripted fictional statements, imaging how the State Department’s spokesperson might respond to certain news. One such parody depicts Psaki’s reaction to Russia’s victory over the United States in the International Ice Hockey Federation’s World Championship.

This game had nothing in common with real hockey. In the 21st century, you can’t play hockey as though it were still the 20th century. The Russian team blatantly demonstrated its imperial ambitions in the very way it played, just as it was during the worst years of the USSR.

Several Russia media outlets reprinted this statement, sometimes omitting the fact that it is a work of fiction.

Others have pretended that Psaki doesn’t understand the basics of European geography. 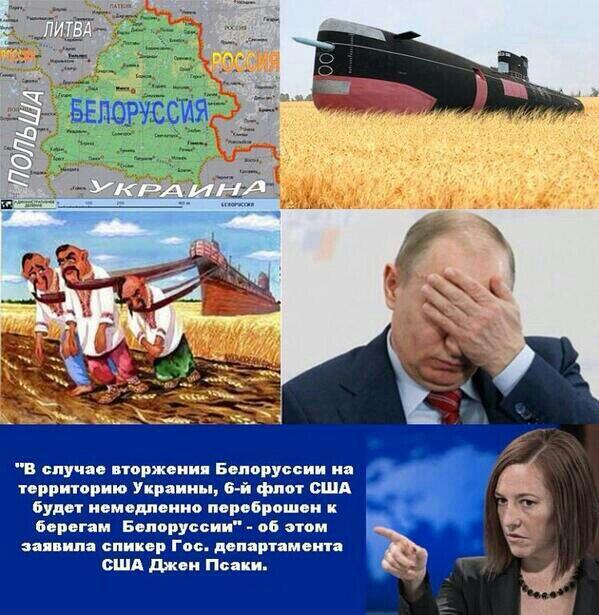 In the event of a Belarusian invasion of Ukraine, the 6th US Fleet will immediately be deployed to the shores of Belarus.

“Psaki” has become a stigmatizing catch-all term for everything Russians dislike about US foreign policy (especially America’s involvement in Ukraine). And Russians’ Psaki-mania is still growing. On June 2, the pro-Kremlin website Odnako published a blog post titled, “Brave New World, or the Psaki Problem,” where the author quoted Futurist poet Mayakovsky to assert that Jen Psaki, the “archetypical fool,” is the culmination of a problematic Western view of the world. Elsewhere on the Internet, there is a new Russian verb: “psaknut’” (“to Psaki” or “Psakiing”), which means roughly “to say something stupid with an air of cleverness.”

Today, June 5, reports spread through the RuNet claiming that the State Department has fired Jen Psaki, replacing her with Deputy Spokesperson Marie Harf. There appears to be no truth to the rumor, which seems to have begun after Harf started delivering the Department’s daily press briefings on June 3, but this hasn't stopped Russian users from flooding Twitter with condolences about the loss of so entertaining a public figure. Thousands have posted messages with the hashtag “#SavePsaki,” feigning support for the RuNet’s Public Enemy No. 1.

Even Russia’s Permanent UN Representative, Vitaly Churkin, got in on the fun today, telling reporters that he “doesn’t know where Psaki has gone off to,” but hopes she will “appear again,” as he’s always “found it very interesting to listen to her.”