“Hashtag activism” has grown to be a major feature of political discussions on Twitter. While many pundits question the effectiveness of these online movements, even belittling them as “armchair activism,” it is hard to deny that campaigns like #BringBackOurGirls do raise public awareness about specific issues. Now, Russian activists are capitalizing on this discourse by framing the capture of two Russian journalists in Western terms of online activism, hoping for a similar groundswell of awareness and public outrage.

The pro-Kremlin media outlet LifeNews launched the #SaveOurGuys campaign after the Ukrainian National Guard captured two of its reporters, Marat Saichenko and Oleg Sidyakin, on May 18, 2014. The Ukrainian National Security and Defense Council has accused these two men of aiding and abetting “terrorist groups” (known to others as “separatists”) in Eastern Ukraine. In a video on YouTube showing the capture of Saichenko and Sidyakin, the two reporters are detained beside an anti-aircraft rocket launcher, which soldiers reportedly discovered in their vehicle.

Twitter users have responded by tweeting this hashtag over 58 thousand times since May 19, with nearly 30 thousand tweets on the first day alone. For a sense of scale, #BringBackOurGirls has seen over 3.6 million tweets in the past 30 days, logging slightly more than 40 thousand on May 19. Given their popularity, it should come as no surprise that hashtag campaigns are not limited to journalists and citizen activists. Michelle Obama famously posed for #BringBackOurGirls, and the Russian Foreign Ministry’s official Twitter account posted a photo that featured #SaveOurGuys.

While the #SaveOurGuys campaign has enjoyed success in the Russian-language segment of the Internet, it has failed to penetrate mainstream Western news, which largely continues to criticize Ukraine’s pro-Russia separatists for their detention and treatment of journalists, most notably during the 4-day detention of Vice journalist Simon Ostrovsky. While the US State Department has formally requested the release of the LifeNews reporters, spokesperson Jen Psaki—a popular target of ire on the RuNet—has cast doubts about Saichenko’s and Sidyakin’s status as “journalists.” 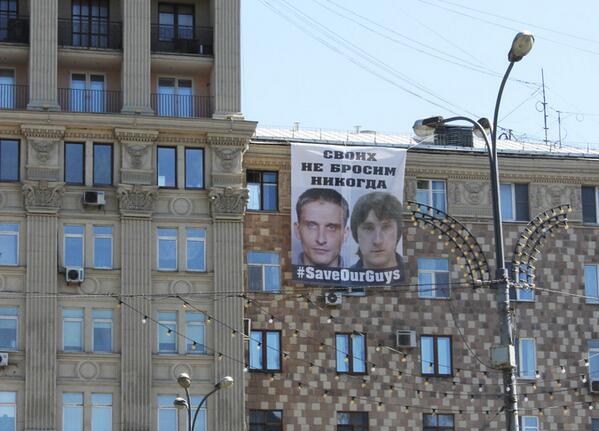 A banner appears across the street from the US embassy in Moscow, reading, “We never leave behind our own.” 21 May 2014. Twitter.

The perception that America applies a double standard when weighing the freedom of the press helps explain why LifeNews has waged its social media campaign in Western terms. #SaveOurGuys does not look just to raise awareness about these two journalists’ predicament, but also takes aim at the West, accusing Europe and the United States of hypocrisy. (This line of attack fits perfectly with LifeNews’ editorial biases.) The effort to shame the West was perhaps most visible on May 21, when someone across the street from the American embassy in Moscow displayed an enormous banner showing the hashtag and a picture of LifeNews’ captured journalists. While many Western media (to the extent that they have covered the story) represent this issue as a question of the true journalistic standing Saichenko and Sidyakin, pro-Kremlin media depict the matter as a terrible failing of the United States, which continues, “for some reason,” to support an “illegal junta” that tramples the free press.

Considering this disconnect in worldviews, it is little wonder that the #SaveOurGuys campaign has minimal resonance in the West, but fuels a self-propelling cycle of outrage on RT, LifeNews, NTV, and other Russian outlets. LifeNews’ attempt to redirect international outrage about the abduction of over 276 schoolgirls in Nigeria to the detention of two Russians journalists caught with anti-aircraft missiles in Ukraine has not, it seems, won over the outside world. The #SaveOurGuys campaign does represent a Russian activist effort that adopts an approach familiar elsewhere, but the re-appropriation is too ham-fisted to break out of the RuNet to a more global audience.