A memorial on Maidan Nezalezhnosti square in Kiev, Ukraine. May 2014. Photo by Marco Fieber (CC BY-NC-ND 2.0)

The beginning of the Euromaidan protests in Ukraine almost exactly six months ago can be traced back to a Facebook post by Ukrainian journalist Mustafa Nayyem on November 21, 2013 expressing outrage at President Victor Yanukovych's decision not to sign an association agreement with the European Union.

There were thousands of other posts expressing anger and disappointment on Facebook and Twitter, but his drew probably the most attention.

Many Ukrainians cite these posts by Nayyem as the driving force behind the first street protest, which led a few hundred people to the Independence Square in Kyiv, soon to be joined by thousands and thousands of others. It was the beginning of protests that engulfed the main town square of Kiev and eventually swelled to encompass the country, with the world watching with bated breath. 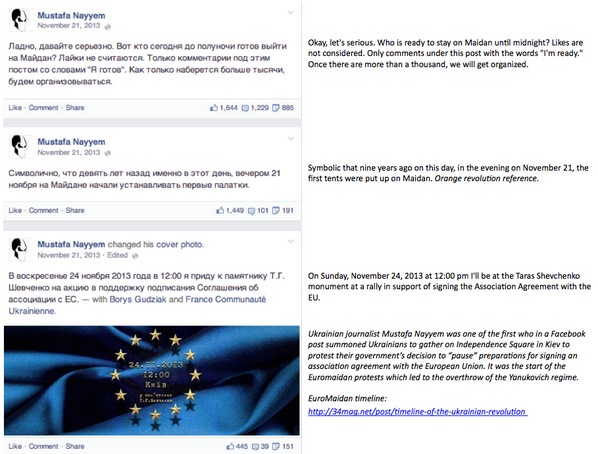 Journalist Mustafa Nayyem posted these calls to action on Facebook on November 21, 2013. Image courtesy of @andersostlund on Twitter.

What came to be known as the Euromaidan protests grew into something huge, resulting in massive street actions, a rejuvenation of civic society, offline and online grassroots organizing, horrific violence and deaths, and the ousting of the president and his government.

Six months on, Ukraine finds itself facing a cautiously hopeful future, but also new challenges, with the annexation of Crimea, unrest in the East of Ukraine and ongoing pressure from Russia.

Whatever happens next, many participants of Euromaidan events will forever preserve memories of these months, both the good and the bad.

Tetyana Lokot from Ukraine is a researcher and PhD student at Merrill College of Journalism, University of Maryland. She studies social movements, urban protest and digital media in post-Soviet countries. This photo captures a graffiti in Podil district of Kyiv, with one of the slogans of the Euromaidan movement, “I am a drop in the ocean.” Image courtesy of Strike Poster community on Facebook. 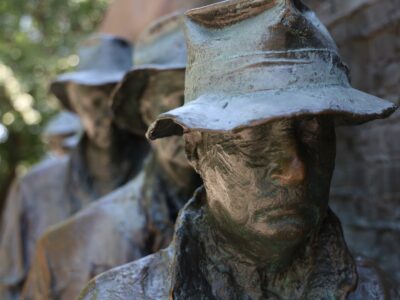