VIDEO: Mining Mogul Brags About the Unbelievable “Deal” He Scored for Zambia's Copper

A video has emerged online in which the owner of an international mining company reveals that he was shocked and pleasantly surprised that the Zambian government sold him one of Africa's largest copper mines for a song, about a decade ago.

While addressing a trade organization in Bangalore India, Vedanta Resources’ owner Anil Agarawal claims the Konkola Copper Mines brings in annual profits of at least 500 million US dollars, even though he only paid a small fraction of that –  25 million dollars- to the Zambian government in 2005.

A video of his talk posted by the international campaign group Foil Vedanta has gotten under the skin of many Zambians. The video which is in Hindi with English captions, has over 10,000 views, and has been largely shared on social and mainstream media. Some Zambians are calling for the repossession of the Konkola Copper Mines (KCM) from Vedanta Resources, a company that was founded in India and is headquartered in the UK.

Here's an English translation of the video:

We saw in the newspaper the Financial Times, that Africa's largest copper mine was for sale. The government was privatising it. I got quite interested and consulted a few people. They replied, “Are you insane?” I told them, “What's the harm in talking to them?”

I did some research and it turns out they were a big deal, employing 20,000 people. I consulted a friend at [the international business firm] McKinsey – Ranjit Pandit. I asked him to draw up a formal bid, “make the papers beautiful, professional,” I said. The documents were prepared. We kept our assessment of the mine at 400 million US dollars. But we only had 4 million dollars in our pockets! Take chances in life. Everyone sitting there, take a chance!

Why are we different? Different because we take chances. I told you we have to take a chance. In the document we said,”We will give you 25 million in cash and 375 million we will have to invest to make the machines run.” After sending our bid, we forgot the matter, and suddenly in about a month or so, they invited us. We called up and inquired. They confirmed: “This company is yours.” “Really?”, I said. I took one of our engineers and went to Johannesburg and caught a connecting flight there to Lusaka.

When we arrived there, we were surprised to receive VVIP treatment, red carpet, the entire government arrived at the airport to receive us. Surprised at seeing such
arrangements, we asked someone. “It's all for you, sir.” “‘How many people do you have in the delegation team?” There were Ministers, VVIP vehicles, cavalcade…”

We were told, “you will be going to the Parliament today and the president's place as well. Where are your people? It's necessary to meet the president.” Repeatedly, we were asked “Where is your delegation?” I asked “What delegation? We are the delegation.”

We were taken to the president. The president. I said, “your Excellency, we are 30 people in our delegation. But they missed the flight at Johannesburg.” (audience laughs) “Can you wait till tomorrow? They all will come.” “No no no. Parliament is tomorrow, we have to decide today. The key is ready. Are you ready?” “I am ready, I am always ready.” He says “I will handle it.”

And then we saw the parliament for the first time, what a building! I had prayers beads in my hand and the kept chanting “Ram” going forward. With my smiling face. When I sat there with my man, the president came and sat by our side. He told the entire Parliament what great people we are and how great our work is is and that “we [Konkola Copper Mines] will make their lives better. And that we will make schools, colleges make hospitals and blah blah…” We just kept watching, chanting God's name there, thinking “you will make them – not us! ha ha ha ha ha.”

We bought that company. It's been nine years, and since then every year it is giving us a minimum of 500 million dollars and has given us 1 billion in total. It has been continuously giving back, because we took a chance.

Accusing the multinational corporation of tax avoidance during a Foil Vedanta protest outside the Zambian High Commission in London in April 2014, the group demanded: 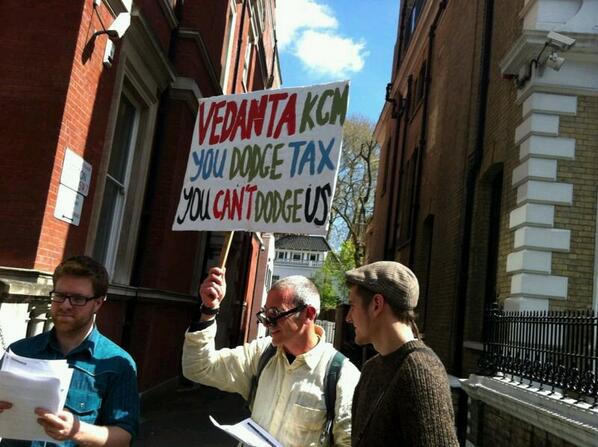 The Government of Zambia must make KCM’s accounts and annual reports public. The Zambian people and the international community demand to know the volume of copper leaving KCM’s plants.

As a Zambian, i have decided to take a stand on the issue of KCM. I am now believing that His Honor the Vice President, Dr Guy Scot has always been right about Vedanta and its partners. They are here to dupe the Zambian people of their resources. I have engaged the office of Mr. Navin Agarwal in UK to get clarification on his remarks concerning KCM. I am of the view that Mr. Agarwal insulted the intelligence of our leaders and subsequently the Zambian people, therefore, the Zambian government must take action. Join the pressure Group Re-Nationalize KCM…! ..If you want to get your own clarifications on the video, send me a message requesting contact to Mr. Agarwal's office in London.

Patrick Nshindano, an official from local NGO Action Aid, which campaigns against tax avoidance by multinational corporations in the country, was shocked by the video and was quoted by online Lusaka Times saying:

It is disheartening that the KCM boss could talk about buying a national asset for a song with such impunity…. For us at ActionAid, this video confirms what we have always said about the privatization of some of these assets. This goes to mean that there was something fishy about the whole process.

Commenting on the story, a reader by the name of Mandaliza wrote:

Ba [Mr] Nshindano, this is a straight forward issue. This company should be asked to go. Problem in the country called Zambia is that everyone is a political analyst. I want to say this, for as long as Zambians with money are not encouraged or supported to be genuine partners in the mining sector we should forget about genuinely benefiting from it. Zimbabwe, South Africa, Angola, DRC and Botswana have encouraged and supported their citizens from private sector to be genuine investors in the mining sector. We view mine participation from a labourer perspective instead of looking at the $500m profit that the mine has been giving the guy and what that money would do to the 13 million plus Zambians.

The country’s Vice President, Guy Scott, told parliament last February that KCM owners allegedly did not mind the company being declared bankrupt or placed under receivership in order for its liabilities to be taken over by government and disclosed that it appeared the company externalized huge amounts of money.

He also revealed that the mining company has liabilities in excess of $1.5 billion, it has not paid its creditors and repaid bank loans and that it owes other mining companies for processing copper.

He pointed out that government has also discovered that there are two companies known by the same name Vedanta, with the one owning KCM not being bound by the regulations of disclosure of the London Stock Exchange and the Financial Services Authority in Britain.