Military commander of the Slavyanks separatists, Igor Strelkov, is a historical reenactor, and, allegedly, works for Russia's military intelligence.

According to Ukraine's Minister of Internal Affairs Arsen Avakov's Facebook [ru], Ukraine's security forces are currently engaged in an attempt to reclaim the center of Russian separatism in Eastern Ukraine — small towns of Slavyansk and Kromatorsk. So far they have been unsuccessful in their “anti-terrorist operation,” even to the point of losing two assault helicopters to ground fire. The stiff defense from the separatists, or “proponents of federalization,” as they are sometimes euphemistically called, may be due to the efforts of one man, their commander Igor Strelkov.

Strelkov may not be his name. At least, the Ukrainian secret police maintain that Strelkov's real last name is Girkin, and that he is a colonel in the GRU, Russia's Main Intelligence Directorate. Whether this is true or not, Strelkov is not an unknown entity. He is definitely Russian. One can, for example, read his memoirs [ru] about his time as a volunteer fighting for the Serbs during the Bosnian war in 1992. He is also a member of the Drozdovtsy, a monarchist organization commemorating the Russian Civil War General Drozdovsky. Finally, and perhaps ironically, Strelkov is an avid historical reenactor, with plenty of photographic [ru] evidence [ru] of his prowess at wearing historically accurate and dashing 1920s uniforms — his passion is the Civil War Era “White guard” movement. 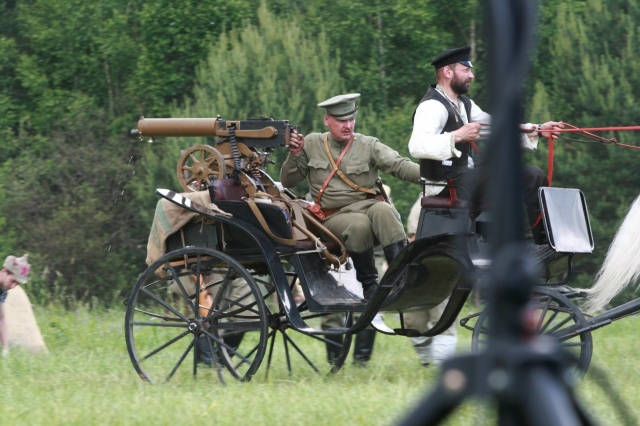 Strelkov riding a “tachanka,” a carriage mounted machine gun used by both sides of the Russian Civil War.

It is also an established fact that Strelkov has a history with the Russian security forces. In 2010 he told [ru] his fellow reenactors on an Internet forum that he was currently serving in “unit 36391,” which according to blogger yadocent [ru] is the Federal Security Service's counter-terrorism department – not quite a colonel in the GRU, but still, nothing to scoff at. yadocent, however, says that he has inside information that Strelkov has since left government service.

Journalist Oleg Kashin begs to differ [ru]. He says that he recognized Strelkov as a man he saw in Crimea while reporting on the annexation last month. According to Kashin this “intelligent looking, mustachioed man dressed as a civilian” was calling all the shots on the ground in Simferopol and Sevastopol, discussing the terms of the Ukrainian Black Sea fleet capitulation. Local pro-Russian militia called him “an active GRU man from Russia.”

How does this square with posting personal information on public forums? Who knows! But the man seems to be fast acquiring mythical qualities. There are already unsubstantiated rumors of his death [ru] from sniper fire, that began through a tweet [ru] which was picked up by the Ukrainian media. Meanwhile, even though he is supposedly dead and/or surrounded by Ukrainian regular troops, Strelkov manages to send sit-rep missives which are then uploaded to a LiveJournal blog [ru]. One reader of the nationalist publication Sputnik & Pogrom has compared [ru] these tersely lyrical updates to Stannis Baratheon's siege at Storm's End (careful, potential Game of Thrones spoilers).

Here is an excerpt from Strelkov's last report [ru], posted just hours ago:

In Slavyansk, during the day, the anti-sniper regiment destroyed two more enemy snipers (presumably from the Right Sector or a Private Military Company) just north of Sobolevka (the northern reaches of town). The garrison has no losses for the day. We have returned to several previously abandoned positions. Right now it is quiet, although we are being scared with news of a new “assault” at 3AM. If they get to it — thank God! I've grown tired of our troops ineffectually chasing the always-moving armored groups. We await!

Because of the nature of the RuNet, one can never discount the possibility that this might be a talented fake or a public relations feint on the part of Lubyanka's spooks. Perhaps Strelkov is already dead. Perhaps he never existed in the first place.