Hong Kong is often considered a global financial center and the city's stock exchange one of the most important in the world. But the city is also home to many alternative exchanges based not on money and stocks, but on sharing.

Social media has helped sharing activities gain in popularity. Many media outlets have dedicated coverage to the rise of the sharing economy in the last few years, highlighting car-sharing services and companies like Airbnb, which connects homeowners and apartment residents with people seeking cheap lodging.

A number of exciting Hong Kong-specific cases were recently presented at a local festival known as ShareFest.

ShareFest first emerged in the US and has since spread to more than 20 cities. It connects local sharing projects and introduces people to resources that help them to construct a socio-economic system based on the sharing of services and goods.

The organizers of Hong Kong's ShareFest, who are scholars and policy advocates, were inspired by the 2012 ShareFest in Seoul. The Korean event was organized with the hope to solve the economical, social, and environmental problems through “sharing” by encouraging the community to utilize idle resources, including spaces, materials and skills, according to the event's official website sharehub.kr.

Hong Kong's consumption culture encourages people to buy useless new products, then throw them away before they are worn out. One of the initiatives highlighted at Hong Kong's ShareFest was the Facebook group “Oh Yes It's Free” (now moved to a wiki site [zh]). Similar to the global “buy-nothing day” initiative, the project discourages consumption and encourages reciprocity within the city.

One of its founders, Yat-ching, explained at the festival that the initiative is based on “the act of giving away usable unwanted items to others instead of disposing of them in landfills.”

Like-minded people who met through the platform have set up different groups according to their residential locations and needs. For example, new Facebook group Oh Yes Can Fix aims to crowdsource knowledge on how to mend household items.

To extend the reach of a sharing community, mapping technology is key. Mira Luna, organizing director for Shareable, a non-profit organization promoting the culture of sharing, explained the significance of mapping for building a sharing economy:

to make community assets more visible, which creates a foundation for further community development. Higher awareness of shared assets can lead to more collaborations between sharing projects and new project ideas to fill in the gaps.

Hong Kong Green Map, which is part of the global Green Map System, uses mapping tools to create an index of natural, cultural and sustainable resources in the community.

Initially, the Hong Kong Green Map project was kicked off as a Facebook group. Then members began working together to organize local tours and create Google Maps that showed the location of organic farms, local grocery stores, and recycling bins for clothing, batteries, glass, metals and other materials in a number of districts in Hong Kong.

Lam Lai-shan, one of the founders, said that they are trying to get people from different districts to get involved in the mapping project. The goal is to provide a guide for people to live a green and sustainable life. 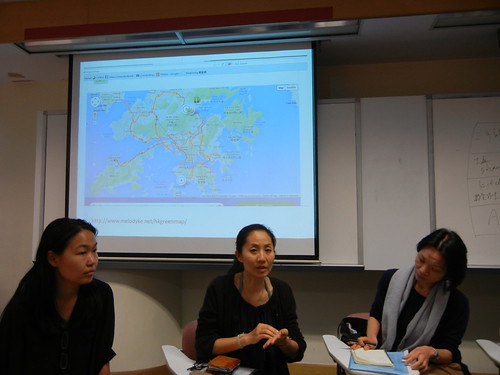 Lam Lai-shan explained her idea for the Hong Kong Green Map. The group was designing a webpage displaying locations of green services. Photo by Ronald Yick.

Book X Change introduces itself as a platform to exchange books and meet new friends:

The Book Xchange for Changes aims to build up a platform for individuals who concern environmental and social issues which happens around us, and is passionate to /interested in building a better world. Bring your favorite books about sustainability, social problems, innovations… , and meet some like-minded new friends — sparks of change are ignited when there are connections.