A column of unarmed Ukrainian soldiers confronts a militia checkpoint in the Crimea.

For all its post-Soviet struggles, the Russian military machine remains one of the most formidable fighting forces around. With that in mind, imagine how hopelessly outgunned Ukrainian soldiers now find themselves in the Crimea, where armed militia choke the roads and airports with checkpoints. Presumably equipped (and frequently staffed) by the Russian military, militias in the Crimea have bottled up and blocked out Ukrainian soldiers in bases, from airports, and elsewhere.

On March 4, 2014, a column of about fifty unarmed Ukrainian air force troops marched on Belbek Airport in Sevastopol, trying to reclaim their base. On the way, the soldiers encountered a group of militia, who fired warning shots into the air, ordering the column to a halt. After tense negotiations, the militia agreed to allow ten of the Ukrainian soldiers past the checkpoint, into the airport.

The unarmed march of soldiers naturally attracted the attention of many Internet users, who celebrated the display of courage and nonviolence. Indeed, despite getting just 1/5 of its total group through the road block, Ukrainian news sites ran headlines like “A March Under Bullets: Unarmed Ukrainian Soldiers Restore Control Over Belbek Airport [2].” 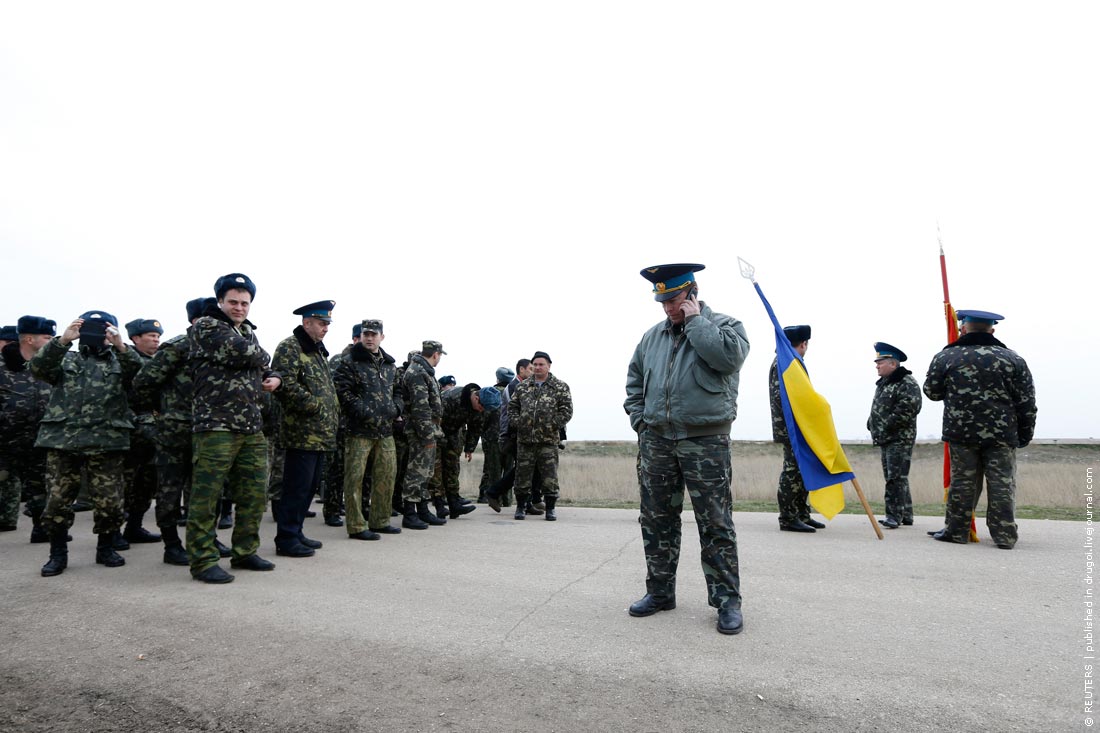 A column of unarmed Ukrainian soldiers pauses as its commander consults on the phone.

Russian Facebook-users interpreted the incident as a disproof of mass defections supposedly sweeping the Ukrainian military (which authorities in Crimea's autonomous government have tried to inflate in the last week). Journalist Ilya Barabanov, writing from Sevastopol, posted [4] [ru] on Facebook that similar confrontations between determined Ukrainian troops and clumsy militia have occurred throughout the Crimea. “What son of a bitch,” Barabanov asked in disbelief, “told Vladimir Vladimirovich [Putin] that 22 thousand Crimea-based soldiers supposedly switched sides to the Crimean government?”

In a YouTube video (see below) posted by Andrei Borisenko (republishing footage from Ukrainian television), it's possible to view roughly three minutes of the standoff and negotiations today in Sevastopol. While the confrontation happened basically as journalists have reported, the YouTube clip (around 2:18) contains comments by one of the militiamen (the most jittery of the bunch), who exclaims to the Ukrainian soldiers, “I'm also from here,” explaining his actions as a response to “provocations.” He goes on to say, “two weeks ago, I was standing [against provocations] with just a stick,” implying that he is ex-Berkut.

The presence of former Berkut police officers in the Crimean self-defense forces makes sense. Roughly a week ago, Ukraine's new government in Kiev liquidated [5] [ru] the Berkut—the special forces who battled protesters in Ukraine's capital for months during the recent revolution. Many Berkut officers returning (or fleeing) to eastern Ukraine, however, received a hero's welcome. Moreover, no sooner than their outfit was dismantled did Russian and Crimean authorities begin courting [6] [ru] ex-Berkut.

If the YouTube video from Belbek Airport today is any indication, the Berkut's veterans of Maidan are more than eager to show what they can do with automatic weapons and Russian troops at their side.