Car tires (used for burning on barricades during Ukraine's Maidan protests) in the shape of the Olympic symbol. Anonymous image found online.

With the Sochi Olympics over, it is back to business as usual in Russia — futile protests for the opposition, reactionary repression for the government. On Monday, February 24, 2014 Moscow's Zamoskvoretsky Court sentenced eight political activists to several years in prison for participating in a May 6, 2012 riot near the centrally located Bolotnaya Square. The actual sentences in the “Bolotanaya Case” vary, from two years and seven months for Artem Savelov to four years for Sergey Krivov. Alexandra Duhanina, the only female defendant left after an earlier amnesty that freed Maria Baronova, received a suspended sentence of 3 years and 3 months. An image showing the Bolotnaya prisoners and their sentences. Anonymous image found online.

The sentencing took place this Monday, rather than last Friday as was originally planned [ru], likely to keep from spoiling the Olympic closing ceremony with untoward headlines. Even though it was a week-day, hundreds of people showed up to the court building, and later to Manezhnaya Square, to protest against the court case, which many view as rigged and political in nature. Some of these protesters seemed to have been inspired by the revolution in neighboring Ukraine, where violent street action helped the opposition reach their political goals. Specifically, several people tweeted about the need to bring car tires to the protest — either a defiant gesture referring to the mounds of tires burned by protesters on Kiev barricades, or a call to build barricades of their own.

Ilya Azar, a reporter at Lenta.ru, was the first one to call for “tires at Manezhka,” tweeting:

everyone, don't forget to take at least one car tire with you to Manezhka

He later deleted his tweet, perhaps rightly fearing that it could be construed as a call to violence by the humorless Kremlin, but not before people made screenshots [ru]. Others [ru] picked up on this call to action, one Twitter user also calling [ru] for empty bottles, gasoline and motor oil (Molotov cocktail ingredients), another using Aesopian language to avoid charges of extremism:

I need help! Around Manezhka I got a flat tire. Everyone who is coming, please bring a spare, it could be old or without the rim.

A few people heeded these calls, one of them Nadezhda Tolokonnikova of Pussy Riot fame, who was apparently arrested while carrying one [ru]. Tolokonnikova later tweeted from a police van, describing [ru] her detention as “rough.” 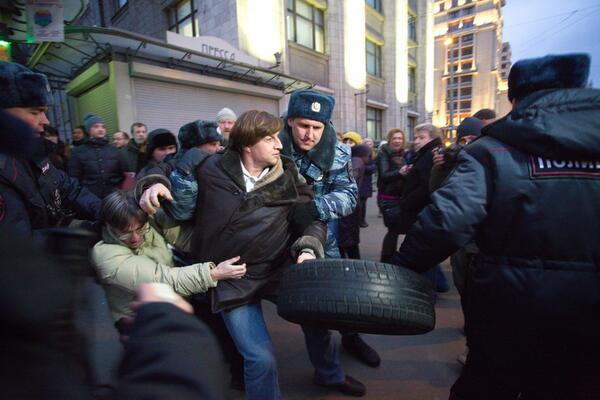 A man getting arrested on Manezhnaya Square, holding a car tire. Grani.ru.

Indeed, the Moscow police reacted swiftly and ruthlessly, dispersing the protest and detaining several hundred people, among them putative opposition leader Alexey Navalny [ru], according [ru] to tweets [ru] by protesters. Some also described [ru] the police action as “unusually” brutal and impatient. Pro-Kremlin writer Eduard Bagirov tweeted [ru] that this was because of the Ukrainian angle; post-Maidan the riot police have a “moral right” to “execute” protesters, he maintains. Yulia Arkhipova, an economics student who recently got into a Twitter flame war [Global Voices report] with radio talk-show host Vladimir Solovyev for being pro-Maidan, wrote [ru] a scathing criticism of the tire-debacle, arguing that the Russian opposition is adopting the trappings of Ukrainian protests without their spirit:

In Russia the opposition has seen the Maidan and is now role-playing. They bring the Russian flag to the Zamoskvoretsky court, they sing the Russian anthem. The protesters yell “Down with the thieves” [in Ukrainian] and call the riot police “Berkut.”

Sure, that might look like the Maidan, she writes, but what these protesters lack is the willingness to quit their jobs and the commitment to stand in the cold for months at a time. Thus, what worked in Kiev, is unlikely to work in Moscow.

Meanwhile, the Bolotnaya Square prisoners will do hard time, although human rights defender Pavel Chikov hopes [ru] that the sentences are low enough that they might soon be released on parole, considering how much time they've already spent in jail. It remains to be seen if these eight men and women will become a mascot for the protest movement or a successful deterrent against it.