After a violent crackdown on anti-government Euromaidan protesters left 70 to 100 people dead this week, Ukraine's parliament formed a new majority and voted to oust President Viktor Yanukovych under the growing pressure of the protesters.

Yanukovych was not in the capital Kyiv at the time, having fled and denounced the events as a coup.

The legislature's vote was met with approval from people within the Euromaidan movement, which has protested for three months against the increasingly repressive government led by Yanukovych after he backed out of a deal with the European Union in November 2013.

Following the turmoil on 20 February when security forces shot at protesters, a deal [uk] was originally struck between the opposition and Yanukovych that would end the violence in the country, but would also see him remain president until new elections that were to be held by end of year. The deal also included a return to the 2004 version of the country's constitution, which limits presidential powers and the creation of an international commission for investigating the events in Kyiv. The agreement was brokered by three European foreign ministers.

On the evening of February 21, the leaders of the parliamentary opposition came to Kyiv's Maidan (Independence Square) – the stronghold of the protesters – to present the signed agreement to the people. They arrived just as Maidan was mourning the unprecedented loss of lives which occurred the day before. Despite risks, hundreds of thousands had gathered on the square, including some of the police officers who had deflected to the side of the protesters. People blamed the president and his regime for the escalation of violence and the use of firearms.

When the protesters heard that Yanukovych would remain in power at least until the next elections, they booed the parliament representatives. A regular member of the Maidan self-defense unit (the “sotnyk”) took to the stage and gave a very emotional speech calling on the president to resign by the next morning or Maidan would go into the offensive (video).

His call received overwhelming support from the gathered crowd, and that support was echoed by the leader of the Right Sector movement, a right-wing opposition group, albeit in a more restrained manner. Well-known journalist Dmytro Gnap also got on stage, blaming the leaders of the opposition leaders for betraying the Euromaidan movement and outlining possible options of Yanukovych's resignation.

Cracked voice of a sotnyk was the voice of all Ukrainians.

Afterwards, one of the opposition leaders, former world boxing champion turned politician Vitaliy Klychko, got on stage and apologized to the protesters for entering into an agreement with Yanukovych and “shaking his hand“.

Shortly after these events, news spread that Yanukovych was leaving Kyiv for the eastern Ukrainian city of Kharkiv. Later in the evening, however, social media activists have identified a private jet that allegedly belonged to the President leaving Ukraine via a flight tracking site FlightRadar24. As the plane was flying towards Sochi, many believed Yanukovych was fleeing to Russia.

However, the jet did not land there but went further towards the United Arab Emirates, with Yanuckovych allegedly on board. Whether Yanukovyh has really left Ukraine, however, remained unconfirmed.

In the morning of February 22, the Maidan self-defense movement announced that they were guarding Parliament and other government institutions, while government security forces had completely abandoned the government block in Kyiv apparently expecting the protesters to storm and destroy its buildings. Twitter user Pedrodon tweeted this image of the events:

Protesters are patrolling through the govt quarter and guarding parliament in #Kiev #Ukraine #ukraineprotests pic.twitter.com/GWT8fsEG0j

A journalist from Brussels, @Balliauw, also added this image:

Self defence forces from #Maidan guarding the building of the presidential administration in #Kiev pic.twitter.com/4QFlWwUPzJ

Government forces and private security personnel had also abandoned Yanukovych's notoriously lavish residence Mezhygirya. Maidan self-defense members encircled the residence to prevent looting and destruction, but allowed journalists and other citizens free entry (photos). Hundreds of Ukrainians have visited the place throughout the day, which was off limits to regular citizens for years.

Found documents in the water near the dock.

While many Ukrainians were having a tour of Mezhygirya, MPs assembled in Parliament and began voting on a number of crucial decisions, including the return to a parliamentary-presidential republic (with limited presidential powers), choosing a new speaker of parliament, and several other key government positions.

In the midst of these events, one of the pro-government channels released a video statement [uk] by President Yanukovych, who allegedly recorded it in Kharkiv, the second largest city in the northeast of the country. In the statement, the president accused his opponents of a state coup, referred to protesters as “bandits”, and stressed that he was doing all in his power to prevent bloodshed.

He also added that he was not planning to leave the country. A screencap of President Yanukovych’ address released on Feb. 22, 2014

While MPs in the parliament were hastily leaving the pro-presidential political party Party of Regions, several pro-presidential and pro-Russian MPs and regional authorities quickly called an assembly in Kharkiv. The move caused widespread concern that separatist or federalist statements would be adopted and appeals for Russia to deploy its troops in Ukraine would be made.

However, the assembly only called [ru] for self-organizing to maintain order in the eastern and southern regions of Ukraine and for friendly relations with Russia. In support of the event, a mass rally by Party of Regions supporters was organized in Kharkiv. While some participated genuinely, there were media reports of pressure on state employees and others [uk] to partake in the rally.

At the same time, a large rally in support of Euromaidan also took place in Kharkiv [video]. Twitter users @ShkvarkiUA tweeted from the city center:

East and West are UNITED! FREEDOM TO THE PEOPLE! – shouts Kharkiv.

Kharkiv Euromaidan activists also demanded the removal of their separatist mayor and governor. Closer to the evening, reports emerged [uk] that both officials were leaving for Russia, as State Security Service of Ukraine opened a criminal investigation into their separatist claims.

Later that evening, the parliament in Kyiv voted to oust President Yanukovych and called early presidential elections for May. The MPs also supported the release of former Prime Minister of Ukraine Yulia Tymoshenko, who was jailed by Yanukovych in 2011.

Needless to say, the reaction of many Ukrainians was celebratory. Kyiv-based journalist and photographer Bogdana Shevchenko tweeted:

Thank you everyone who fought for justice! Glory to Ukraine! Glory to the heroes! Today we won!

No coup in Kiev. Gov. buildings got abandoned. Speaker of Rada elected legally. Pres. VYanukovych has 24h to sign 04 Const. into law.

As of 7 p.m. local time on 22 February 2014, the whereabouts of Yanukovych remain unknown. 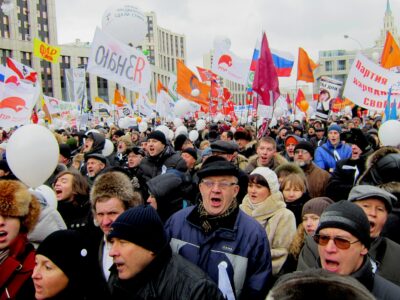